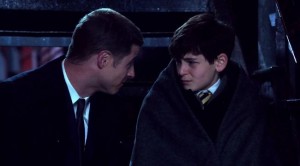 Finally the fall season is underway and the first on my ‘to watch’ list was Gotham which aired this week on FOX. From the trailers and previews it looked really exciting, but from what I’d read from the reviews it wasn’t that well received, yet Netflix still signed up for the entire season globally post it airing on TV.

Well, I’ve taken a look at the first episode and I have to say it didn’t wow me. BUT, Marvel’s Agents of S.H.I.E.L.D. was a slow burner. If I hadn’t been such a fan of this genre and the Avengers collection I wouldn’t have stuck with the show. However the last few episodes were amazing. And to be fair, the first episode of most TV shows is never that impressive because there is so much ground to cover to get you up to speed with what is going on and where the show is going to take you.

But, with this show we have to assumer that most people pretty much know the back story, and they certainly show that with some of the background skimmed over. For example we pretty much start with the death of Bruce Wayne’s parents, where the films always start. No need to outline who the Wayne family is and their input to the city. Falcone is referenced without being introduced – we all know he is the baddie of Gotham. And an English gent by Bruce Wayne’s side needs no introduction – clearly this is the one and only Alfred.

Obviously, this is a show that I am going to continue watching. Like Smallville, clearly I know were it is going to end up, but I really hope that it still shocks, surprises and entertains me along the way.