In this week’s viewing: Kyousougiga and Galilei Donna wrap things up with family reunions, and more! 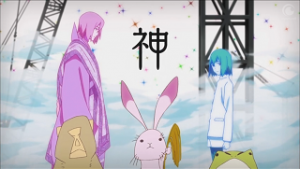 Kyousougiga finale—It was beautiful, both visually and story-wise. It’s a terrific ending. This wins the season.

Inari gets his retirement, and Yakushimaru and Koto will take over as the gods of creation and destruction, but not before both of them demonstrate that they can assert themselves to him. The best part is that moment when Yakushimaru demands that Inari take the beads back and then give them to him at his request—it’s so underplayed, but it completely redefines their relationship.

Or maybe the best part is that the creator god prefers to appear as three anthopomorphic animals chasing each other around in circles. It’s up to you.

Someday I’d like to hear the story behind this show, of how a young director got together with a ragtag band of animators on a shoestring budget, and how they couldn’t get a TV gig at first so they made a short online series, and then they got a chance to do a full TV show, but the budget still would only stretch so far, so they wound up having to come up with some of the most creative filler ever. That young director and co-writer, Rie Matsumoto, is off to an amazing start.

There’s only one small flaw in this series, and that’s due to the least interesting bit of filler. I can’t give this top marks when the recommendation will always have to come with “but skip episode 0, because it’s not a real episode even though it’s listed as one.”

Speaking of the filler, in true fantasy fashion, we get the footnotes and appendices next week. Expect much Lewis Carroll geekery. 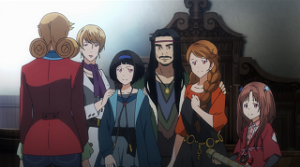 Galilei Donna finale—Last week our heroines were a few feet from missile-induced death, but nevermind, just assume the rocks shielded them or the missiles were duds or something, because we’re running out of episodes and it’s time to wrap the whole thing up with the scripted show trial to end all scripted show trials! I guess the reputation of Italian justice hasn’t improved any in the future.

Personally, I’m disappointed with this show. Too many gaps, too much focus on sightseeing rather than the figuring-things-out part that looked like it would be the main plot driver at first.

But, I’m not the intended audience. The intended audience is 13-year-old girls who’ve always had an interest in science or technology but are starting to worry that it’s not girly enough. This is a story that tells them they can achieve great things if they stick with it rather than getting hung up on boys (note Kazuki losing her crush at the very end). I think that it achieves what it set out to achieve.

So you, the older reader, should probably skip it, unless you find yourself at a family gathering with a good Internet connection and a bored niece, in which case, why not sit down with her and watch this. 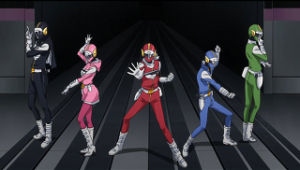 Samurai Flamenco #11—Just when it looks like it might start explaining things, Samurai Flamenco vanishes over another cascade on the waterfall of crazy. For now, I’ve given up trying to guess where it’s heading or how it’s going to fill three more months if it keeps escalating at this rate.

One thing I do know is that “From Beyond” is an early H. P. Lovecraft story about extradimensional horrors, and that Lovecraft is reasonably well-known in Japan, so I think that organization name is a reference to the story.

Well, let’s talk super sentai teams! There are always five members, one of whom is a girl, who always has to wear a pink outfit. (For those who can remember Mighty Morphin’ Power Rangers: In the original Japanese, the yellow ranger was male.) The leader is always the red one, and there are typical traits associated with all the colors, as touched on in the episode.

This series has gone the extra mile by working the color themes into the names of all the new heroes. Their full names, as seen on the official English site along with one of the most unfortunate typos ever, are: 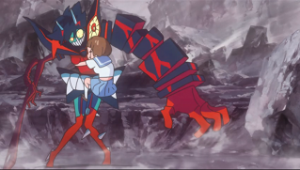 Kill la Kill #12—And this week, Senketsu represents the raging hormones taking over as Ryūko morphs into Katie Ka-Boom. That one’s easy to figure out, right? Okay, try a harder one: What is it supposed to symbolize that Senketsu looks just like the face of Dr. Matoi with his eyepatch and mustache?

Next time, it’s back to the Tokugawa era with Satsuki off to conquer western Japan and thus complete the unification of the school system. But first, a 2-week winter vacation, with the next episode airing January 9th.