Whatever was in this stuff called morale juice, it was extremely potent. Elfrida felt like Superwoman. Broken wrist? A minor detail. 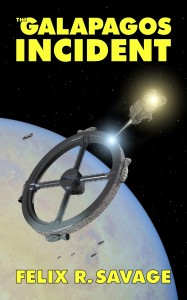 Whatever was in this stuff called morale juice, it was extremely potent. Elfrida felt like Superwoman. Broken wrist? A minor detail. Anyway, the medibot had given her a smart cast. It detected her neural impulses and moved her fingers for her, enabling her to work through the injury, as a soldier would.

She pulled the astrogator’s desk into her lap and got started on dos Santos’s request. She had a plan of her own. But she’d better get this out of the way first, get dos Santos off her back.

The Cheap Trick’s hub utilized a next-generation interface that made everything easy, featuring color-coding and an MI guide in the form of a baby harp seal. It had given Elfrida a guest pass, which was enough access for this simple task. A 3D map of the solar system spread before her. Using her contacts and the touch screen, she entered the unique ID that dos Santos had sent to her desk—a string of random letters, numbers, and characters. The hub queried its database.

“Sorry, I couldn’t find that ID!” it responded. “Would you like me to contact a remote server?”

While the hub reached out across the AUs, Elfrida lay back on her couch, wondering why she was here. Not why she, Elfrida Goto, was en route in a stolen spaceship to a possibly fatal rendezvous with the PLAN. She didn’t need a therapist to explain that to her. It was a simple equation of guilt multiplied by professional responsibility, plus, probably, a smidgen of desire to impress dos Santos. No—why were humans in space at all?

Given more autonomy, the Cheap Trick could probably have flown itself better than Petruzzelli was flying it. Given permission, it could have operated its own guns. It didn’t need a human crew. The same went for Botticelli Station, the Kharbage Can, and pretty much everything in space. Why did the UN, and every company in the private sector, spend trillions to train, transport, and support personnel who weren’t really necessary?

Elfrida leaned forward and watched, entranced. A red dotted line had appeared on the screen, linking the Cheap Trick and the megaserver on Ceres. Now, the line advanced around the Belt. She was watching her signal travel in real time. It reached Vesta, where there was another megaserver. And then it jinked off in a new direction, travelling back towards the sun.

“Lotta redirects on this path!” the baby seal commented. It displayed a cute animation of itself riding a bike. The signal track stopped at a random location in the Belt, and the baby seal got off its bike. “Signal has terminated in a dark pool! That’s the technical term for a privately owned server farm that only shareholders get to use! Unfair, huh? Want me to continue?”

“Is there anywhere to continue to?”

“Oh, sure! I’ll just have to crack the dark pool’s security to source the physical location of this ID!”

The comms screen popped up a new bubble. Dr. Hasselblatter again. Glory took the call. The COMLI secretary was now in an air taxi, getting changed out of his quidditch uniform. “Well, you’ve got your combat program,” he said, pulling his jersey off over his head. “It should be arriving at any minute. Space Force wants total confidentiality on this, but you’ve already promised that.”

The glider passed over the Angelou River, a stream that wended its way around the equator of UNLOESS, where all the best residences were. It began its descent towards the treetops that concealed COMLI HQ, also known as New York. A plastic copy of the Statue of Liberty stood on a promontory in the river, holding her torch up over children playing on the imported lunar sand.

“Also,” Dr. Hasselblatter said, scratching his stomach, “I forgot to ask you why you called me before. I doubt it was to ask permission for this escapade.” He folded his arms over his impressive pecs and stared at the camera.

Glory thought about her response for a minute. Finally she typed, “Yeah. I wanted to talk to you about the stross-class phavatar that Luna is field-trialing on 11073 Galapagos. It appears to be taking orders from someone else, and I wondered if you knew anything about that.”

“OK, done! Here we go!” The baby seal got back on its bicycle and pedalled. The signal track moved outwards from the dark pool. “Oh oh. Hello.”

“Where?” Elfrida zoomed in. The Belt filled the screen. At this level of magnification, she could see the Kirkwood Gaps in the Belt—the depleted rings where virtually no asteroids were found, all of them having been pulled away eons ago by orbital resonances with Jupiter. The signal track had stopped in the center of Gap 2.5, the Kirkwood Gap 2.5 AUs out from the sun.

Elfrida frantically zoomed in further. This was as good as the magnification got. She could now see paltry constellations of celestial bodies within Gap 2.5, for no region of the Belt was entirely depleted. Gap 2.5 was home to the Alinda family of asteroids, for example. But the signal appeared to have dead-ended in empty space.

“I don’t,” the baby seal started. Then it fell off its bike.

A realistic animation of an axe, as long as Elfrida’s arm, crashed across the screen and clubbed the baby seal on the head, spraying blood across Gap. 2.5.

The screen flashed violet, then reverted to standby mode.

“Dos Santos!” Elfrida shouted, waving across the gyrosphere. “Ma’am! I located that ID! It’s in Gap 2.5, near Vesta! I’m sending you the coordinates.” Easier said than done. All trace of her search had vanished. “I could probably find it again,” she said.

But did she want to?

“They’re hiding out in Gap 2.5,” Glory typed. She waited for precise coordinates. Goto did not send them. Oh well. “Who are they, sir?”

Her finger hovered over the delete key. The idealist and the bureaucrat in her warred. The barefoot girl from the villas miseriaswon.

“I extracted their ID from the avatar herself. Seems she’s been sending them updates ever since she arrived on 11073 Galapagos. Naturally, I have a number of questions. First and foremost, why is a third party being allowed to observe a COMLI mission, without informing the agents in the field? Secondly, what is that third party’s interest in 11073 Galapagos? And thirdly, how did they find out about 11073 Galapagos in the first place?

“I think I know the answer to number three, sir. You. Derek would never have done it. He’s smart enough to be aware of the risks. You, on the other hand”

Glory sat back and put her hands over her eyes. Years of therapy and soul-searching had helped her to understand the anger that drove her. She was surely wise enough, at her age, not to let it take control.

Dos Santos seemed to be busy at the comms desk, so Elfrida seized her chance.

She had figured out, around the time she performed her swan dive to the bulkheads, that she didn’t need to look for a telepresence cubicle. In fact, there probably were none on the Cheap Trick. All Space Force personnel had BCIs and EEG crystals. That meant they didn’t need a headset to telecast. And the couch she was sitting on was so smart that it undoubtedly doubled as a telepresence couch, itself.

So all Elfrida had to do was get around the fact that she had no BCI or EEG crystals.

Using the animated guide, she located the hub’s telepresence suite. “Guests are permitted limited telecasting privileges,” she was informed. “You may make one ten-minute visit to Earth, or the equivalent. Please enter the ID and approximate coordinates of your phavatar.”

“What does ‘or the equivalent’ mean?”

“If your destination is closer than Earth, you can stay for longer, and vice versa!” said the baby seal, none the worse for having died gruesomely a few minutes ago.

Elfrida glanced across at dos Santos and switched to typing her inputs so that she couldn’t be overheard. “I want to go to 11073 Galapagos. How long do I get?”

“Thirty-three minutes! Do you want to start now?”

“You really should get one! All the cool kids have them! You can still telecast, but your visual feed will be displayed on the screen instead of by neural excitation!”

“Can you display it on my contacts instead of on the screen?”

“What about the aural feed?”

“I can lend you some headphones,” the baby seal offered. The couch’s robot arm delved in a hidden compartment and brought out a pair of wireless headphones.

“What are you doing?” Kliko said to her.

“I’m going to listen to some music. I feel kind of bleh. I think maybe it’s this stuff.” She lifted her half-empty morale juice pouch.

Jun Yonezawa’s voice crackled in her headphones. He was speaking over one of the Galapajin’s crappy suit radios. She was receiving the signal through Yumiko’s aural sensors. The view through Yumiko’s optic sensors, displayed on her contacts, was all of the cathedral. Venus glowed overhead like a coconut-flavored jellybean. Its light shadowed a hole in the regolith about ten meters from the base of the cathedral. Yumiko was sitting near that hole. She was not wearing a spacesuit. Her bare fingers and toes clutched folds of solar shroud.

“I can’t delay my blasting schedule because a robot decides to have a nervous breakdown in the blast area,” Yonezawa said tightly. “This is your last warning. Get out of the way!”

Everything had changed again since Elfrida was last here, and she couldn’t immediately get a handle on what was happening. But that warning seemed clear enough.

The latency period was now down to four seconds. But Yonezawa had not waited even that long.

The flash of an explosion whited out Elfrida’s contacts.

Of Monsters, Mecha and Talking Bears