At the end of last season, Leonard and Penny were engaged and discussing moving in together, Raj’s relationship to Emily has advanced, Stuart’s Comic Book store has burned down and he is working for Howard and Bernadette taking care of Howard’s mother during her recovery, and the university is refusing to allow Sheldon to change his field of study. Facing all of these changes, Sheldon decides he needs to leave Pasadena and take a train ride. Leonard and Penny tried to talk Sheldon out of leaving, but they were no more successful than when they tried to convince him not to move to Boseman, Montana in the third season. 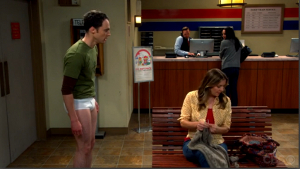 Following a recap of Sheldon’s departure, we see him standing in his underwear in a train station forty-five days later, scaring other passengers. While trying to borrow a phone, he explains that his possessions were stolen while he slept. Nobody in the room is willing to help him or even listen to him and he grows more and more frantic until the opening music plays. 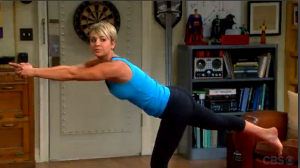 Coming back from the commercial, we see Penny making herself at home in Leonard and Sheldon’s apartment, doing yoga. Sheldon calls, having found a phone at the police station, where he has been brought in. After explaining his predicament, Leonard agrees to pick him up in Kingman, Arizona. Penny can’t go to Kingman with Leonard because she has an interview and doesn’t want to hear Leonard complain about her new pixie haircut. 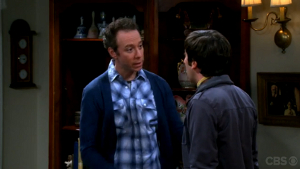 Cut to Howard and Raj driving to work, but Howard wants to check on his mother. Since Mrs. Wolowitz got her cast off, Stuart has moved out after he and Mrs. Wolowitz, Debbie, became too chummy. Raj raises the idea that Mrs. Wolowitz and Stuart are becoming lovers.

Sheldon tries to offer help to the police in finding his stolen possessions by insulting the police and continuously compares them to Sherlock Holmes. Meanwhile, Amy has accompanied Leonard and is annoyed that Sheldon called Leonard instead of her. When they arrive in Arizona, Sheldon questions Amy’s arrival, demonstrating that he hasn’t changed in this time away from Pasadena. 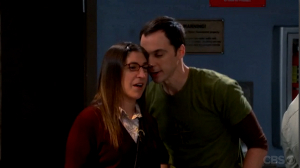 Penny is preparing for her interview as a pharmaceutical representative for Bernadette’s company. When Penny tries to back out, she’s met with tough love by Bernadette.

When Howard arrives, he learns that Stuart hasn’t moved out, and is growing closer to Mrs. Wolowitz, especially when they demonstrate that they have pet names and Howard is concerned that he didn’t know about the latest development.

On the ride back, Sheldon lists off cities around the country that he had visited, noting that he never left any train station in any of the cities he visited. Sheldon proceeds to give a rundown of all the hot dog stands at the different train stations, completely ignoring Amy and Leonard’s reactions to him. Amy complains about Sheldon’s treatment of her. He admits to Leonard that he doesn’t want Amy to know he couldn’t make it on his own. He admits to Amy that he is concerned about her reaction to his failure. When Amy admits that she doesn’t care that he isn’t perfect, he confides in Leonard that he wanted to break up with her. When Amy suggests he had an adventure, Sheldon compares himself to Gandalf and a butterfly, explaining he could deal with changes. 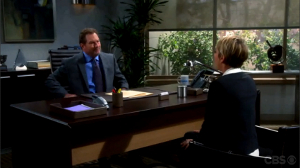 Penny’s interview gets off to a bad start with her nerves causing her to repeat the word people and then explaining how good she is at sales based on her experience at the Cheesecake Factory, resulting in her insulting the interviewer. Once the interviewer starts asking Penny questions, the interview gets worse and Penny starts to leave. Before leaving Penny asks the interviewer not to tell Bernadette how badly the interview went and the two begin to bond over how scared they both are of Bernadette, seeing her dark side when everyone else seems to be taken in by her chirpy demeanor.

Leaving Howard’s mom house, Raj makes a case for Stuart’s potential romantic relationship with Mrs. Wolowitz, causing Howard to decide it is time to call his mother, where he discovers that Stuart and Mrs. Wolowitz have a joint voicemail message. 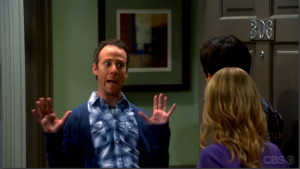 Howard and Bernadette admit to each other that they can’t believe that Howard is looking forward to seeing Sheldon and how surprised Bernadette is that Penny landed the sales rep job, although Bernadette is convinced the interviewer is fond of her. Stuart shows up and is met with barely concealed hostility from Howard. Their argument reveals a variety of mother and father issues for both of them.

After getting over the change in Penny’s hair, Sheldon shows a detailed slideshow of his train travels. 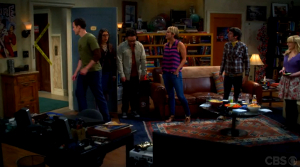 The opening of season eight built upon the characters who have been introduced and developed over the past seven seasons, however, aside from Sheldon’s comments at the beginning about being a world renowned physicist and Bernadette’s job as a pharmaceutical researcher, the episode could have belonged to any of a number of sitcoms, giving no hint at the science or geekiness which were so important to the show’s early seasons.