Home Science Fiction Alien Ruins Good Enough For You? Or, Why Ruins Keep Getting Ruined.

I find ruins fascinating. To this day I am a sucker for Sci-Fi movies, art and literature featuring either alien ruins or ruins of a collapsed human society. My earliest influences in this regard are probably the red stone Martian ruins in the Tom Corbett Space Cadet Viewmaster reels from the 1950s, and the ruins of ‘N’Yark’ ( New York City ) in the ‘Mighty Samson’ comic books of the early 1960s where ‘stone age’ humans eke out a living in a post-holocaust world crowded with dangerous mutants. Great fun! 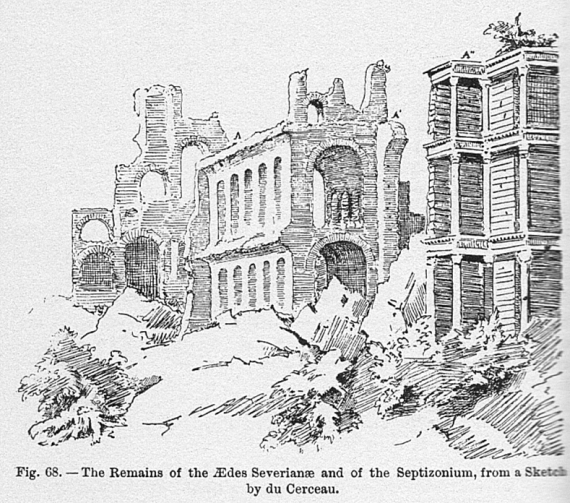 Not too long ago “a 6.5-metre section of Rome’s ancient Aurelian Wall collapsed near the capital’s central train station after days of heavy rain”. This got me thinking. What CAUSES ruins in the first place? And how can the process of ‘ruination’ be utilized by Sci-Fi writers?

First answer: weather, obviously. Rain seeping into rock, brick & concrete and weakening the load-bearing strength of the material. Frost heaving. Erosion from wind. Lightning strikes, such as that which set fire to the woodwork in the Coliseum’s upper story on August 23rd, 217 A.D. Or massive floods (to which Rome has always been prone).

Second answer: earthquakes. For example, a 1360s earthquake caused the whole western outer shell of the Coliseum to collapse into a massive ‘hill’ of stone and concrete rubble.

Third answer: vegetation. To use the Coliseum again, its ruins were once famous for 430 species of plants not found anywhere else in Italy (plants presumably grown from seeds somehow carried in by animals imported for the beast fights). These plants were removed in 1871, and the very ruins ‘scraped and shaven clean’ in order to prevent root growth from prying the stones apart.

Fifth answer: barbarians. I’ve always wondered about this. Why waste time and effort levering massive buildings apart when there’s pillaging to be done? And why set fire to anything (risking the fire spreading throughout the entire city) before you can be sure everything portable has been thoroughly looted? Fact is the 5th century barbarian incursions hardly touched the physical infrastructure of Rome. Later medieval assaults were far more damaging.

Sixth answer: greed. In many ways, living in Rome for many centuries was a form of lottery. If you could purchase or be granted the right to dig in any given spot, you might find something worth selling, be it jewellery, sculpture, metal objects or whatever. Everyone from noblemen to elderly widows tried their hand at this, sometimes with spectacularly profitable results.

For example, in May of 1721 an intact bathroom was discovered in Domitian’s Palace. An Emperor’s bathroom for sure. It was 21 metres long and 12 metres wide, and featured walls covered in mosaic work and bas reliefs, a ceiling divided into panels of fresco painting and gilded stucco figures, a colonnade of porphyry shafts along three walls, “while on the fourth side five lion heads of gilt bronze threw jets of water into a marble basin. Each fountain was flanked by ten columns… with capitals and bases of gilt bronze.” Before the month was finished the room was stripped to bare brick, the entirety of its decorations having been broken up and sold. So you and I will never, ever get to see it. 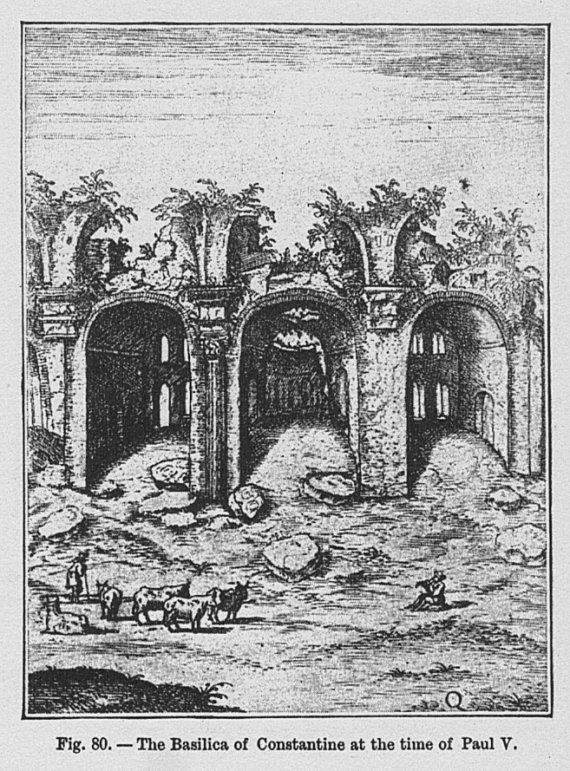 All the same, the above agents of destruction seem scarcely adequate to explain why are there so few ruins in Rome, and next to nothing in the way of intact ancient buildings. We know from 4th century writings that Rome contained “46,602 tenement-houses, 1,790 palaces, not to speak of a thousand public buildings like thermae, temples, basilicas, theatres, amphitheatres, circuses, porticoes, etc…. hardly the ten thousandth portion of this mass of buildings has escaped destruction.”

Say what? The palace of Septimius Severus towered 70 metres above the arena of the Circus Maximus; the Temple of the Sun 80 metres above the Campus Martius: the palace of Caligua 90 metres above the pool in the palace of the Vestal Virgins. Granted, all three were built on hills, but at least half of the quoted heights consisted of solid, massive buildings covering many acres in area. So why, at best, do only foundations remain? And where are the hundreds of equally gigantic buildings elsewhere in the city? What happened to them?

So now we come to the most destructive agent of all:

The seventh answer: recycling. Most of the monuments of Rome were largely intact right up till the 15th century. Then, as the Renaissance got under way and Rome began to boom, virtually everything was destroyed, or rather, torn down and reused. In effect, recycled.

The hill of crumbled Coliseum I mentioned? It required 15 generations of stone cutters and lime-burners to exhaust it.

Anything made of marble, be it pavement, building blocks, or perfectly preserved statues? Reworked for use in ‘new’ buildings, or hurled into the lime-kilns to ultimately wind up as plaster and stucco for walls and ceilings.

The enormous Temple of Venus and Roma? Licensed by the Vatican for use as a quarry in 1450 A.D.

The Palace of the Vestal Virgins? Licensed for destruction in 1499.

The Temple of Vesta itself? Still intact in the year 1489, destroyed right down to the concrete foundations by 1549 A.D. (The modern ‘ruin’ is a 1930’s reconstruction.)

And one final example, the 450,000 pounds of ancient bronze girders used to hold up the roof of the portico to Hadrian’s Pantheon? Removed in 1625 to be cast into 80 cannon, ironically enough, for Hadrian’s tomb, which had already been converted into a fortress even before the fall of the Roman Empire.

So now you know where all the marble and plaster to be found in Rome’s churches, cathedrals, the Vatican itself, and the Renaissance palaces came from. Ancient Rome was dismantled to build ‘modern’ Rome. If the ancient structures had been preserved (I wish!), few of the ‘modern’ monuments would ever have been constructed, as the cost of importing the materials required would have been prohibitive. 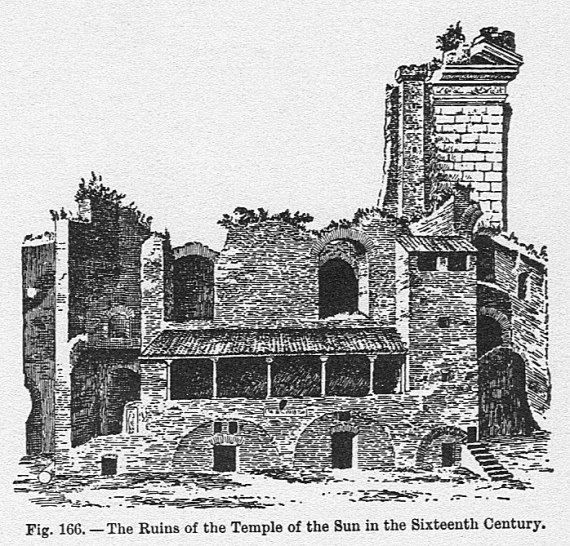 Destroying the work of the ancients must have seemed like a modern, progressive and cost-effective means to ‘beautify’ Rome at the time, not to mention profitable for all concerned. Those who opposed it, and there were some, were considered hideously backward, behind the times, and even selfish for daring to criticise obviously useful ‘improvements’ to a derelict urban centre. Rome was up and coming. Things to build! Things to destroy! Don’t stand in the way of progress! … Sigh…

Melancholy things, ruins. There’s a quiet, poignant beauty to them. Wonderful backdrop for the literature of sense of wonder.

You gotcha your post apocalypse ruins, always good for a chill of recognition racing up your spine. Then you got your lost civilization ruins, usually inhabited by degenerate descendants of the original highly advanced culture which built them in the first place.

But my all-time absolute favourite set of ruins are alien ruins, half-buried, crumbling, enigmatic, and no doubt harbouring fantastic secrets in the form of artifacts both artistic and technological. I will buy ANY book centred on that theme. You might say I prefer a dead alien culture to a living alien culture. More mystery involved.

Of course, my heart goes out to Martian ruins. When I was a kid such things still seemed plausible. Even after the Mariner probe showed a barren landscape of craters and desert I held out hope. When the Viking landers took their first panoramic landscape pictures, I was longing to see the sort of ruins you see in the film “Rocketship XM” rising above the horizon. Alas, no such luck.

So I take refuge in alternate reality fiction. Anything which portrays the 1950s vision of mars and its former inhabitants will do.

But I’ll accept ruins on Pluto, or on some distant planet circling a dying star. Even a derelict spaceship found drifting in deep space will stir my sense of wonder. Anything ancient, unknown, and mysterious.

And yet I must confess I’m a tad disappointed how often the ruins are simply the product of time. It was built. It was abandoned. Now humans have come along to explore what’s left and attempt to decipher its meaning. Always good enough to suit my tastes, but I can’t help but wonder if there couldn’t be more to it, more variety? 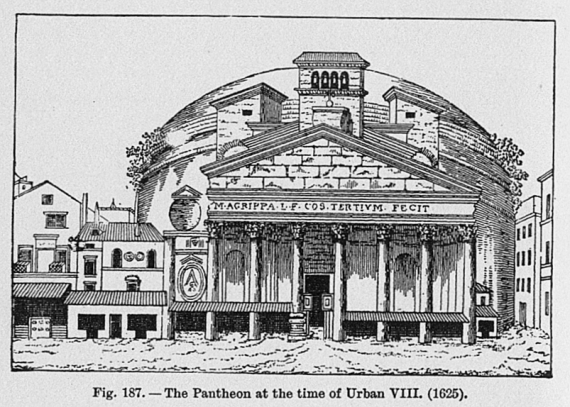 Taking the facts behind Rome’s decay into account, I suggest the following backdrop scenarios:

— systematic looting of alien ruins for items which can be sold to wealthy tourists,

— archaeologists being run ‘off-planet’ for opposing the exploitation & destruction of alien ruins,

— poverty stricken humanity blowing up surviving Earth cities in order to attract alien tourists to the ‘newly authentic’ ruins, and so on. Lots of possibilities.

The point is any story or novel involving ancient, alien artefact-laden ruins should take into account the extreme likelihood they will be exploited in some fashion or another beyond simple exploration for the sake of knowledge. The human race exploits the heck out of everything wonderful on this planet. You KNOW we’re going to do the same everywhere else in this universe. So why not make it entertaining we explore the possibilities in fiction? Offers up villains a’ plenty, and heroes too.

And mainly, in the process, stirs my sense of wonder.

Good enough reason for the genre to exist, I figure.

Info and picture source: ‘The Ruins and Excavations of Ancient Rome’ by Rodolfo Lanciani, published 1897 A.D.

Things to Ask Your Agent