UPDATE: The Best of Amazing Stories the 1926 Anthology has been released early in paperback and is now available for purchase,
and Amazing Stories Giant 35th Anniversary Edition, is currently available in both Kindle and paperback editions!  (We’re very excited!)

FuturesPast Editions is proud to announce that it has entered into an agreement with Steve Davidson, new owner of Amazing Stories—the first science fiction magazine, founded in 1926 by Hugo Gernsback – and with DPS digital book production – to distribute a new line of classic reprints from the magazine’s early years. (Check out Amazing Stories’ new website at amazingstoriesmag.com.) This new series will be published under the imprint “Amazing Stories Classics”. 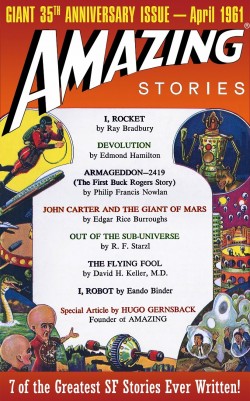 First off the drawing board is Amazing Stories: The Giant 35th Anniversary Issue, a reprint of the double-sized 1961 issue rounding up some of the best stories the magazine had published up to that point. A rare collectible, this special issue is available now in ebook for $3.99 and paperback for $9.99 at Amazon and other outlets. It features all the original illustrations by the legendary Frank R. Paul for each story. The authors comprise a Who’s Who of early science fiction: SFWA Grandmaster Ray Bradbury, Jules Verne Prize recipient Edmond Hamilton, Buck Rogers creator Philip Francis Nowland, David H. Keller who John Clute hailed as “the ideal” Gernsback writer, Science Fiction Hall of Fame honoree Edgar Rice Burroughs, Eisner Hall of Fame inductee Eando Binder, and R. F. Starzl, dubbed a “master” of space opera by E. E. Smith. The table of contents presents a stellar lineup of such notable stories as “I, Robot,” “Armageddon: 2419” (introducing Buck Rogers), “John Carter and the Giant of Mars,” and “Devolution.” It is a volume that belongs on every fan’s bookshelf, be it wood or digital! 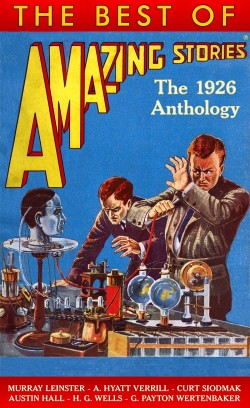 Then, due out on Wednesday, August 6th, is The Best of Amazing Stories: 1926, the first of a year-by-year showcase of the best stories selected from each year of the publication’s storied history. Our 1926 selection presents work by such distinguished practitioners of the craft as multiple Hugo Award winner Murray Leinster, Gernsback Award winners H. G. Wells, Curt Siodmak, G. Peyton Wertenbaker and A. Hyatt Verrill, the controversial Austin Hall, and others.
Forthcoming under the Amazing Stories Classics imprint are The Best of Amazing Stories: 1927, and reprints of two widely acclaimed classics, far ahead of their time, from the 1930s Amazing Stories Quarterlies: Seeds of Life, After 12,000 Years, and Away from the Here and Now—a collection of stories by Clare Winger Harris, the first woman to sell a story to a science fiction magazine.
“I am extremely busy growing Amazing Stories in its new incarnation as an all-digital publication. But I wanted to acquaint new readers with the great stories from the magazine’s early history,” says new publisher Steve Davidson. “Partnering with digital book producers Digital Parchment Services meant I could turn over the work on compiling and publishing Amazing Stories Classics to them, and the distribution to FuturesPast Editions, who have been selling science fiction, fantasy and horror on the web since 2000. This arrangement allows me to focus on the new Amazing Stories while ensuring a steady supply of our best classic stories and novels to potential readers.”