It’s no secret that Clarke has tried his hand at wit before, but Trouble with the Natives hits every mark like a veteran comedian, making this short story an instant classic.

Humor is a tricky thing to tackle in science fiction. The genre is centered on fantastic scientific ideas in past, present, and future settings. But if done poorly, the reader may be left wondering if the author is trying to be serious or purposefully satirizing the plot. When you read the work of humorists like Douglas Adams, you pretty much know what you’re getting. For those less tied to the humorous side of literature, it can be disastrous. 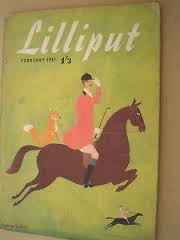 Trouble with the Natives is one successful attempt at humor by the famed writer Arthur C. Clarke known more for his traditional work in science fiction. This short story first appeared in the February 1951 issue of the British humor magazine Lilliput under the title “Three Men in a Flying Saucer.” A few months later, the May 1951 pulp issue of Marvel Science Stories ran the same tale using the title “Captain Wyxpthll’s Flying Saucer.” The adaptation reviewed here is from the 1978 Puffin anthology titled “The Worlds of Arthur C. Clarke – Of Time and Stars.” 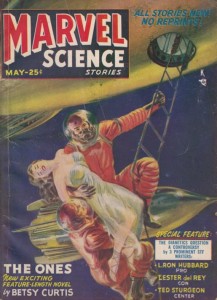 It’s no secret that Clarke has tried his hand at wit before, but Trouble with the Natives hits every mark like a veteran comedian and in this reviewer’s mind, it’s very funny and a classic piece of work.

The premise of the story is about first contact from an alien perspective, with a focus on Crysteel and Danstor, two diplomats of a “different species” from the rest of the crew – because of their human like appearance even though they are no exactly qualified. “They had only one pair of legs and arms, no eyes at the back of the head, and other physical deficiencies which their colleagues did their best to overlook.” But the pair’s true understanding of the human race is limited due to their casual observations and monitoring radio broadcasts. A classic scenario still used by writers of today.

After some confusion because of their dress and unskilled dialect, a wondering human reluctantly directs them to the nearest town. Once the pair is on the street, they encounter even more difficulties dealing with the inhabitants of the small English village of Little Milton. The first man they approach rudely passes them by without the slightest acknowledgement. Next, they come upon the postman who is too busy making deliveries to stop and chat. The success of their mission is suddenly in doubt.

They finally come to the front door of old Widow Tomkins. Just shy of being a century old, she resorts to using a slate and chalk for visitors to communicate with her because of her poor hearing. Having not studied the written language close enough, Crysteel and Danstor are left with no choice but move on with the hope of finding a different and more coherent human to communicate with. Ever the polite diplomats, they leave the widow with an unintentionally cryptic message on her slate.

“TRANSMISSION WILL BE RESUMED AS SOON AS POSSIBLE.”

Even fandom takes a humorous knock in this story when they come to the door of young Jimmy Williams. They’ve finally found somebody who speaks their language, or so they think. They mistake the magazine clutched in his hand as a sign of advanced technology. The cover illustration of a rocket blasting from a cratered planet and the title “Staggering Stories of Pseudo-Science, Price 25 cents” leads us to a predictable yet comical verbal exchange.

At last, the pair stumbles upon police officer P.C. Hinks who doesn’t hesitate to take them downtown to the station for further questioning and not surprisingly, they find themselves locked behind bars. With the help of a human inmate, they escape. Their recent exploits are recorded for historical purposes, but when the Department of Extraterrestrial Affairs recruit Crysteel and Danstor for their next mission as first contact ambassadors to the mysterious Martian neighbors, the two bumbling diplomats go into hiding, not to be seen again.

If there is a flaw to be found in this story, it falls upon Clarke’s painful use of unpronounceable alien names. Crysteel and Danstor are not so bad, but their spaceship’s pilot is named Krtclugg, a distracting ingredient that makes me grit my teeth when I try to read it aloud. Just as frustrating is a captain with the name Wyxtpthll. Creative translations are universally accepted when done comfortably, but a nine letter name using the “sometimes-vowel” only once is not what I would consider as a comfortable read. Though purely conjecture, this could be the reason behind the name change from the Marvel Science Stories publication.

Culture shock and language barriers are the primary conflicts that drive the humor in this story. Yes, a lot of it is predictable if not expected, but the sharp dialogue and precise prose (except for a few names) are strong enough to make this a timeless example of literary humor at its best.

Regardless what title this short story is listed under, reading Trouble with the Natives by Arthur C. Clarke will bring a smile to any member of fandom who appreciates the classics. It doesn’t always have to be funny, but it often makes it more enjoyable when it is.

Steve’s thinking about Halloween, which often brings up thoughts about Stephen King. How do you feel about that? Seen both versions of The Shining, have you?

Gu Shi’s novella “Chimera” mixes hard science with Greek mythology in a way that makes it worthy of Chinese and international awards.

Playing the Short Game: How to Sell Your Short Fiction (Part 27)