I know. Loncon3 was over three months ago. And yet I’m still not tired of talking about it. I’m not going to bore you with reports on my three little animé panels. They were, after all, only a drop in the bucket of WorldCon panels. And what most people (i.e. my personal friends) seem to remember most fondly about a con—even years down the road—are not the panels, but the people they saw there. 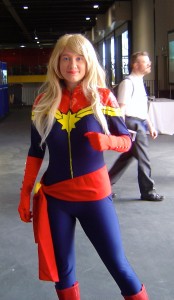 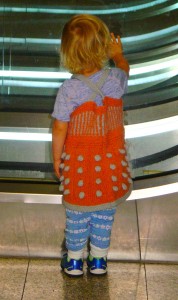 Usually when I attend a con, I hang out with people I already know. A lot of my close friends are fans and likely to be there, too. Plus, I have a lot more out-of-town friends whom I only get to see at conventions. And then, there are the people that I only know on-line or on paper, and I’m eager for a chance to meet in person. Sometimes the only new people I get to meet are the ones on panels with me.

But not at LonCon3. Because LonCon3 was (duh..) in England. That’s another country. It had never occurred to me that that might make a difference. It didn’t make any difference at Anticipation (Montreal, 2009). 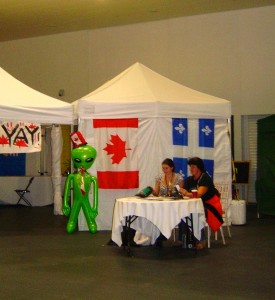 But LonCon3 wasn’t just in another country. It was on another continent. Most of my friends cannot afford to fly frequently or far. They do not balk at travelling 1,500 miles to attend a con, but they do not fly. They pack the car full of fans who will chip in for gas, and they drive. Even among those who could fly, many didn’t make it. An intimidating number of my personal friends were prevented by an alarming selection of really good excuses, (such as hideous accidents, family health crises or even (like the Guest of Honor) death).

Alas, I was able to count the friends I   saw at LonCon3 on my fingers. And, yes, that’s including my husband. This automatically modifies my social behaviors, such as talking to strangers while standing in line. It’s not that I’m unwilling—I talk to strangers in line at the supermarket all the time . But it doesn’t happen much if I’m already surrounded by my crew. And in London we spent a godawful amount of time standing in line. Standing in line is the British Way of Life. They even made me stand in line to get into a panel where I was the moderator. 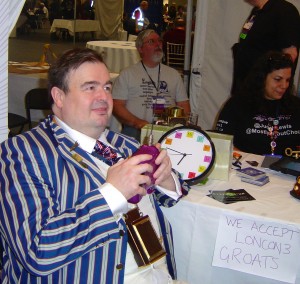 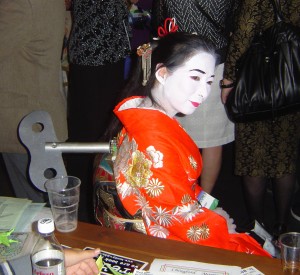 The very first person we talked to was Dave. (Of course I didn’t get his last name. Glancing over the Con Staff list, I think he was probably Dave Haddock. But it might also have been Dave Mansfield.) We found Dave working overtime at what would soon be Loncon3, and he shepherded us to a pub, pubs apparently still being the heart of life in England—which would never have happened, if we’d been with old friends. 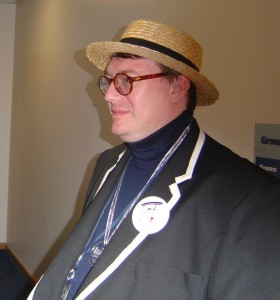 When pulling out cash to pay for our burgers and wine, I produced a one-pound note. Dave jumped on it as if he’d never seen money before. And, indeed, he hadn’t seen much of this particular money. The British replaced one-pound notes with one-pound coins in 1984. Dave practically snatched the note out of my hands (I wondered if I was being robbed!) and ran around the pub showing it to all his friends. All were amazed, and several took pictures.

One fan inquired if it were, perhaps, a Bank of Scotland note, those having been printed somewhat more recently. This triggered a new flurry of passing my bill from hand to hand, while everyone determined to their satisfaction that it was, indeed, a Bank of England note, at least thirty years old, and no longer readily negotiable, although I could take it downtown and exchange it for legal tender at the Bank of England head office. Eventually, Dave pressed the bill back into my hands, assuring me that I should offer it up at the auction as a ‘Life on Mars’ special. (I did. I got three pounds for it.)

We also talked to the Scottish gentleman just behind us while waiting in line at registration. He was a member of the Scotland Association of Jewish Refugees. You might not consider the Holocaust the kind of light topic with which one kills time while standing in line, but our acquaintance was clever and interesting, and much to my surprise, held the attention of my non-Jewish husband for an hour and a half.

We talked to the adorable drunken English teenager while standing in line to get into the Kansas City bid party. I suppose, at my age, anyone under twenty looks fresh and cute, but I was charmed by his enthusiasm. We were all that bubbly about SF once, but it was a long time ago. He wanted to be a writer, and was brimming over with ideas, a few of which were actually pretty good. He was also very flirtatious, which I put down to the chivalrous good manners some English still practice, which dictate that any lady, no matter how old, is a princess. 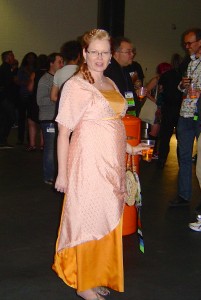 We talked to the French lady on one of my animé panels. She was astonished that Americans might take French animé seriously. (For my opinions on French animé, please feel free to check my frequent posts on the subject in SF Signal.) She held the common belief that animé—by definition—had to be Japanese. Despite that, she proved to be excellent company. 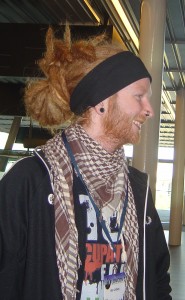 We talked to several Irish students who were shilling for Shamrokon. (Shamrokon was this year’s Eurocon, which—not unlike our WorldCon—is held in a different city every year, and was to be held in Dublin this year on August 22-24, the week after LonCon3.) Plenty of people, having already come all the way to London anyway, didn’t see it as too much extra trouble to add on another week and include Dublin. (It did sound like fun.)

Most of these people had never been to the U.S. If a number of American fans found it too difficult and/or expensive to get to London, then even more European fans find it too difficult and/or expensive to get to America. It doesn’t mean they aren’t interested. They had eagerly attended the numerous WorldCon’s held in the UK. A few had braved Japan in 2007. We spoke at length with a fan group reminiscing about Heicon (Heidelberg 1970)—the attendees were so numerous, they had their own panel. But it’s hard for European fans to get here. Which shouldn’t surprise or offend us. We also find it hard to get there. I was touched to hear foreign fans commenting wistfully that they wished we would hold a few more ‘World’ Cons that were accessible to them. I appreciated their interest.

Upon returning home, I was astonished to discover that their wish greatly angered a number of American fans. Why should we accommodate our European fellows? After all, science fiction belongs to us. We invented it, didn’t we? (Well, maybe not. Jules Verne may claim that title.) Well, we invented the science fiction convention, didn’t we?

Well, maybe not. The first official SF convention was held in Leeds, England in 1937. By official, I mean that they rented a space, the Leeds Theosophical Hall on Queens Square, and invited guests (including Arthur Clarke), some of whom travelled hundreds of miles, for the purpose of establishing the Science Fiction Association (The UK’s first fan organization. 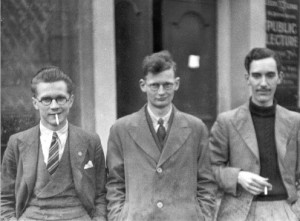 There has been a counter claim that the first ‘convention’ took place in Philadelphia when a group of New York fans spontaneously decided to drop in on friends in a private home in Philadelphia, where they held a party with no particular agenda, and dubbed it a convention after the fact. Even Sam Moskowitz (who is not notorious for his impartiality) failed to make a particularly convincing case that this constituted a genuine convention. His primary argument is that during the Philadelphia party, they decided to hold a real—i.e. pre-planned and programmed—convention later on in New York, and the Brits didn’t argue loudly enough for him to notice them. Even Dave Kyle, who attended the Philadelphia gathering, conceded that the honor should go to Leeds.

Even assuming that we do have some sort of prior claim on SF, why should that make it inappropriate to extend inclusion to foreign fans? I fear the answer is language. Certainly, it’s not really the distance. Florida fans are not much closer to Los Angeles than to Paris. But they’ll go to Los Angeles. Look at the record. Of seventy-four WorldCon’s (counting the upcoming MidAmericon II), nineteen have been held in foreign countries. That’s a little over a quarter. One could argue that Europe probably deserves better than one out of four, but it’s not awful. It implies we are getting over there every few years.

But if we look more closely we see that only three of these foreign WorldCon’s were held in a country where English is not the first language. Not that they don’t speak English, or even sometimes hold panels in English. It’s just not their first language. We’ll go smiling to Australia (AussieCon’s I through IV), taking up collections and holding fund raisers to ensure that plenty of us can get there, and that our friends there can come back to see us. But Australia is an English speaking country. Nobody took up any collections for Nippon, 2007. 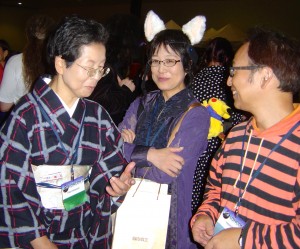 Americans—take a deep breath and prepare yourself, friends— are parochial and smug. We think we are better than the rest of the world, for no readily visible reason except that we have more money. Most of us—when pushed against a wall—will admit that money is not really the same thing s virtue or merit, but we don’t act like we believe it. Most of us are too ignorant to learn other people’s languages, and we get very pissed off if they don’t learn ours. We won’t even watch foreign films with subtitles. They’ve got to be in English.

I don’t expect anybody to change their minds soon. We will continue to hold most WorldCons, just because we can. We’ll pass on all the fascinating foreign cons, while claiming that our local cons are ‘world’ cons. We may or may not trouble to make excuses about our right to do so, but the excuses don’t matter much anyway. We will not encourage our next generation to learn foreign languages and will continue to insist it’s everybody else’s responsibility to learn ours. We will continue to talk about exploring new worlds, and continue to ignore most of the world we already have. Heavy sigh. It’s our loss. Very much our loss.