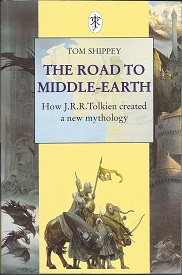 The film goes ever ever on as The Hobbit trilogy continues to trek its CGI trail over our cinema screens. In its wake, there appear more books every day analysing and discussing the work of its creator J.R.R. Tolkien. Few of them have the pedigree of Tom Shippey, a university don who worked and taught alongside Tolkien at Oxford.

There aren’t many experts on Middle-earth who can claim that their books were critiqued by the great man himself, but Shippey showed his manuscript to Tolkien and incorporated his suggestions into the finished work.

Published in 1982, The Road to Middle-Earth is a detailed look at Tolkien’s influences and inspiration. It places Tolkien’s fiction in the context of his academic career, so it’s not just a summary of the novels. For people interested in the history of European languages, it is also a quick introduction to the study of philology, the scientific analysis of language. Shippey shows that this was paramount in the creation of Middle-earth:

From this study of language, we get to spy on Tolkien’s creative process, which at times is surprisingly random:

[Tolkien developed characters] by writing out a string of names … these are for Shadowfax – ‘Narothal, Fairfax, Snowfax, Firefoot [,] Arod? Aragorn? … It is a surprise to learn that Aragorn could ever have been a name for a horse

The analysis of English etymology in this book is extensive but all the more rewarding for it. It’s the sort of book that will delight the nerd (like me) who gets as much of a kick out of reading the appendices to The Lord of the Rings as from reading the book itself.

Shippey is particularly good on The Silmarillion. Pieced together from Tolkien’s papers after his death, The Silmarillion is a bewildering book whose meaning is often opaque. Despite the vast fortune his stories are now generating, nobody has ever dared make a movie out of this tome, which at times is so dense with information that it’s like reading a telephone directory in an unknown language.

Shippey explains that it must be read in a different way to most modern fiction. Its characters are not individuals in the modern sense, which is partly why the book is often impenetrable:

The Silmarillion follows Norse belief … this is the convention that people are their heredity. Sagas commonly introduce characters with a list of their ancestors, often significant in their distinction, wisdom, ferocity, or unreliability

Once this is borne in mind, it is easier to see why characters act the way they do: they inherit all the flaws and weaknesses of their ancestors. It also partly explains Tolkien’s obsession with family trees. It’s important to know someone’s bloodline to understand what kind of person they are.

Reading The Silmarillion with this in mind makes the book more accessible and it is worth persevering with. The main story features the great smith Fëanor and a dreadful oath which he invokes. This oath dooms his seven sons to an endless quest for vengeance which wreaks havoc across Middle-earth. The tale of Fëanor, master of the Silmarils, remains one of the most powerful tales in the Tolkien canon.

Detailed, intelligent, deep and wise, The Road to Middle-Earth is a wonderful companion to any trip across Middle-earth and it is a welcome reminder of the huge craft that J.R.R. Tolkien brought to his work.

Godzillas. They mentioned the possibility that more of them could be out there, and that further screwing around with H-bombs might wake them up. But did we listen? Nope. Good thing!

Get your own HAL-9000 replica with Bluetooth and voice command