Mushishi is MIA again this week. Reportedly the special from a couple weeks ago aired again this week in Japan. The most likely explanation is production issues, but with no official word, everyone’s just guessing and hoping that whatever the problem is is cleared up soon. 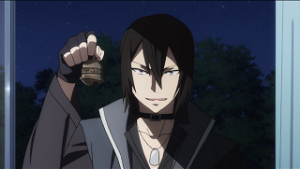 Nanana’s Buried Treasure #8 – Enter, a complete bastard. Hiiyo Ikusaba is here to show up Jūgo and Isshin for the pathetic parodies of villainy that they are. Here’s someone who won’t inadvertently keep developing sympathetic bonds to his fellow humans; he even managed to room with Nanana (technically) without ever picking up her outlook on the treasure hunt. Once again, it’s not people collecting her treasures for evil ends that upsets her, so much as not showing respect for them at all.

This leads to a wonderful speech by Nanana about why she has rules for her game at all, and why she continues to follow them even after death. Even though she’s now stuck in one room with nothing to do but play video games all day and every reason to give up, she’s staying true to herself and trying to keep up the mission she had in life. And Jūgo, understanding this, is now more committed than ever to finding the treasure– and in the right way.

Almost as an aside, we also learn that Jūgo’s landlady can punch holes in concrete. I don’t think that was just meant as comic relief. 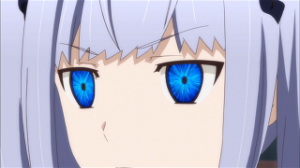 Brynhildr in the Darkness #9 – More glimpses of the life that the witches lead at the lab: they don’t make friends with each other much and they learn nothing about the value of money, but they do know about the existence of cheesecake and, er, cheesecake. And their treatment by the staffers is such that Ryōta can convince Nanami that he could be her friend simply by not being an obvious jerk.

Nanami’s alliance with him is likely to be short-lived, however, as the same doom is hanging over her as Saori the time-manipulator. Her power is just too powerful for the plot to withstand for long, so expect her to help out the others a little– maybe helping them get hold of their next batch of pills– and then to be out of the picture before the end of the season. 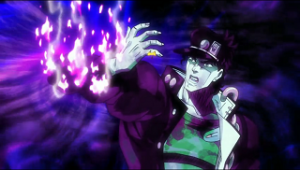 JoJo’s Bizarre Adventure: Stardust Crusaders #9 – The latest vehicular victim of the JoJo gang is the Singapore Cable Car, another real-life tourist attraction from Hirohiko Araki’s travels, albeit one that has seen substantial refurbishment since JoJo’s day. Next up, a train! After that, they’ll probably have to switch to gasoline-powered vehicles to keep up their record of using nothing twice.

This week’s villain carries the Temperance card, meaning his attack has to rely on nice-ing people to death, at least in comparison to the typical Stand user. So we get a power that simply absorbs anything it comes into contact with. (The pedant asks: How does he shed the extra mass, then? Obviously he’s not carrying around the absorbed bodies of everyone he’s ever fought. Or did we really want to know?) And now we know that Kakyōin is a true friend (was there really any doubt… okay, yes, there was) who has no worse trait than just being the world’s most annoying eater.

Meanwhile, Anne (hey, she has a name!) has abandoned her pretense of meeting her father in Singapore to follow our heroes to India, which means it’s time to start taking bets on whether she’s really a well-disguised enemy Stand user, or if the author just didn’t want to have to keep inventing new damsels to be in distress.