As a total SF nerd, I’m always looking for new things to watch. The benefit of a completed series is that you don’t have to wait for the next episode and can indulge yourself in a joyride of highs, lows, weeping, laughing, life, loss and tech. Last week I talked about my love for V and Terminator; The Sarah Connor Chronicles. This week I’m finishing the list off with another two top series.

The first time I watched Fringe I sat there, perplexed and trying to work out whether I liked it or not. I didn’t like Walter Bishop; I felt they were pushing the boundaries too far with him. I couldn’t get a feel for the direction of the series. Overall, it just felt like another failed attempt at something that could’ve been great. I gave up after three episodes. Then, when I was at a complete loss of what to watch, I tried to watch Fringe several months later and WOW, I was hooked.

Fringe is set in the here and now and follows a strange team of individuals who are trying to unravel weird phenomena. Olivia Dunham, a lead FBI investigator, finds herself working alongside the brilliant but institutionalised scientist, Dr Walter Bishop, his estranged son and Astrid; a junior FBI agent. Walter’s trying to recover from being in a mental asylum, takes a lot of drugs, constantly forgets what he’s doing and demands to have a cow (which he names Gene) in his lab. But, he’s a genius, and along with the rest of the team, weird and wacky crime scenes are unravelled.

One of the joys of this series is that it’s a bit like supernatural but always has science behind the weirdness. Though I hated him to start with, Walter quickly becomes a favourite character and – I won’t spoil the ending – but you get VERY attached to him. Over the course of the first four seasons the phenomena that the team are investigating become involved in something much larger and far darker, and ultimately lead to a fight for survival in the final season.

Season 5 does feel rather tacked on, and this is largely because it was. The creators had around seven seasons worth of material, but when the show was axed at the end of season four, they managed to get a reprieve to end everything in the right way. As such, the story jumps rather, though, to be honest, by the time you’ve reached this far you don’t much care because you’re just desperate to know what happens.

This is a seriously good show and one that’s worth closing the curtains and having a marathon viewing session of. 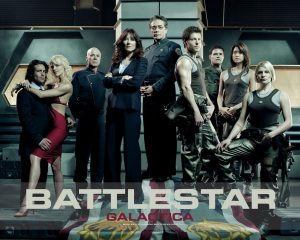 I’ve left my favourite until last because I LOVE this show. I came to Battlestar Galactica rather late, and also didn’t realise that there was a feature length pilot so was rather confused during the first episode. I’ve now watched the pilot and series four times, seen both spin-off movies (Razor and The Plan), and enjoyed Caprica and the more recent Blood & Chrome. I have to say, I think it’s the most intelligent and well crafted SF shows I’ve ever seen.

Battlestar Galactica is, of course, a remake of the single series show from 1978. It’s shot in a documentary style so that you feel like you’re in the midst of the action and has so many story threads going on that you’ll need to watch time and time again to catch them. The main plot is fairly obvious; humans create cylons. After a drawn out war and then 40 years of silence, cylons come back to commit genocide on their creators. A tiny group of survivors flee into the universe and struggle to find themselves a new home. Of course, it’s not that simple at all and the thriller, romance, political and religious subplots are all woven together to create an extraordinarily compelling web of stories.

What becomes so great about Battlestar is that though the cylons are initially enemies, the lines quickly begin to blur. As with life, nothing’s black and white, and even though they’re machines, there are some cylons who have come to think differently from the collective. The number of models – 12 – is a compelling story; Who are they? Have they already been introduced onscreen and you don’t realise it? Why 12? Who made them initially?

In the human fleet there’s the struggle for power between military and the government. There’s friction between weary crew who are risking their lives on a daily basis to protect civilians who don’t seem to realise the extent of the danger they’re in. There are traitors, lovers and troublemakers at every turn.

Battlestar Galactica has to be my favourite SF entertainment ever created, and I can watch it repeatedly for hours on end. In fact, I’m listening to the soundtrack for season two right now. Indulge yourself in this drama of war, hope, fate and unimaginable twists, you won’t regret it!

(Ed. Note:  This article should have appeared yesterday, 5/6/13, but did not due to editorial oversite.)