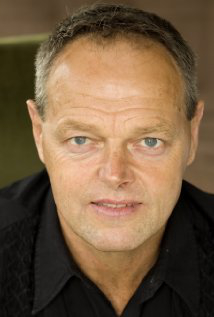 Filming a movie is an incredible experience, much more so than watching one. When groups of artists come together to create a world of fantasy, if they do their job, that world becomes reality brought to the viewer on the big screen. I think enthusiasts will agree that one of the most fantastic worlds created in our generation has been the filming of Lord of the Rings.

Set in one of the most pristine and beautiful locations on earth, New Zealand, Peter Jackson and his crew developed Middle Earth. I was fortunate to meet several people involved in the making of that movie, and one of them, Bruce Hopkins, consented to an interview about the effects of Middle Earth on New Zealand, and on his life as an actor. Bruce played the part of Gamling, King Theodin’s right hand man in Lord of the Rings Two Towers. Bruce lives in New Zealand, a country barely on the map before the filming of Peter Jackson’s productions. Ever since, New Zealand has been in the spotlight.

1.  How does this affect your country? Negative or positive? Tell us a little about your homeland.

It has had a huge impact on our tourism industry. There have also been major impacts on certain parts of the screen production industry, however this has not necessarily impacted the local film scene. Weta & Wingnut obviously are now global players, but you need to move to Wellington to be part of that scene, the rest of the country still fights for limited funding etc, the usual creative industries dilemmas! But the exposure gained from the LOTR films in particular has been significant for NZ as a country and our film industry.

2. Before you were cast in the movie, had you read any of Tolkien’s work? If so, how much and what kind of impression did it have on you?

I had read The Hobbit many moons ago, but did not get hooked on Tolkien from that. I bought a second hand copy of LOTR when I arrived in Wellington to begin shooting, as I only had a weeks notice that they had created a new character and were offering it to me! The hard back copy I bought was actually bound upside down and with the front cover at the back. If it was stamp it would be worth millions! I had to have it rebound as the spine had torn apart during the time I read it. So I got them to rebind it the way I found it, upside down and back to front!.I might add it has some pretty cool autographs in it!!!

3. I can imagine! Do you read other fantasy and SF novels? What are some of your favorite books?

Have to admit I’m not a great reader, but am definitely reading more nowadays. I don’t do sci fi or fantasy so much in book form, leave that for the visual mediums. However a few years ago my daughter’s boyfriend gave me a birthday present of the Temeraire Trilogy by Naomi Novik. I got fully hooked, just had to keep reading, even at my slow pace! Dragons, sailing ships, aerial battles stunning stuff.

4. You played the part of Gamling, the man who steps into Hama’s position after he is killed and you become King Theodin’s right-hand man. I really found that character interesting. Tell us about him.

Well when I bought the book I mentioned first thing I did was go to the appendices and search the name…ohhh he only had a couple of pages he appears in. Turns out he is a retired cammander of an area of Rohan. In the film making process the impression I got was that John who was cast as Hama was not a sword fighting action type, and so they needed to create this other character to aid Kig Theoden at Helms Deep. After 3 nights of what was going to be a weeks shooting for Gamling, Phillipa Boyens visited one night to give some new dialogue to Brenard ( Theoden), she asked me to come with them to a caravan, where she infomed me they loved how I was coming across and the way I fitted in with King Theoden, so they were going to look at putting me into more scenes! For the next 9 months, I would get random calls from my agent saying they wanted me tomorrow, or they wanted me next week etc etc. Would have been nice to be paid a holding fee, because I didn’t want to take other work in case they called, but I had 3 kids to feed and shelter1 However despite that with 2-3 days of pick up shots in 2001 and 2002 as Peter edited each film in sequence, I had the most wonderful experience over 3 years. Every second on set was like bliss to me.

5. What are some of the most memorable times you remember while working on set of the Two Towers?

For Two Towers it had to be shooting the Edoras scenes way in the middle of the most astounding mountain ranges. We shot for 8 days total, and on one of those it had snowed over night so the whole hillside and set were covered in fresh snow, The crew got generators, water pumps and fire hoses and melted the snow off an entire mini mountain so we could shoot and maintain continuity! Also every morning I would arrive at 6am and the 2nd AD Mark Ashton would have a fire burning in a 44 gallon drum. He would ask me if I wanted a coffee I would stand chatting with him in the darkness, then head to get my wardrobe and makeup done. Those moments around the fire with Mark were like being in a film itself! I was in heaven. 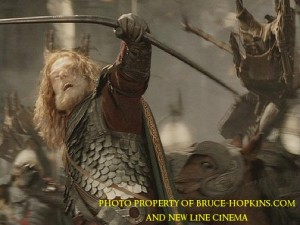 6. Did you go through some special training during the production?

Because of the way my character evolved no! I was not meant to be doing anything other than Helms Deep. Evetually I had some brushing up on sword work. Having been a professional dancer for 8 years before acting, I loved physical work and had done a bit of stuff in Xena, Hercules & Youmng Hercules. But as my character grew in LOTR I then had to take horse riding lessons as they decided I would be riding into battle, and I was not a horse rider, in fact I would say I’m still not a horse rider but I loved the riding I did.

7. What was the most fun you had making Lord of the Rings?

Getting to spend time with Bernard, Viggo, Elijah, Dom, Billie, John Leigh, Orlando, et al, going to Ian McKellens for lunch one Sunday with about 30 others, chatting with various members of the crew I already knew from previous jobs, a couple of parties at Barrie Osbournes house which had a fireman’s pole in it, every millisecond of being on set, watching Peter and wondering how the hell he knew what he was doing, putting on my armor and feeling…yeah I think I know this guy!

8. How long were you on set, how many days did it take to film your parts and did you have some intervals of not working?

As I mentioned earlier my role grew from what was to be one week to about 50 days throughout 9 months in 1999. I then did 2-3 days in 2001 & 2002 for pick ups on Two Towers and Return of The King. I had long periods, someytimes weeks of wondering if I would get called for more work, and not being paid to be on standby made it a bit puzzling. However I did pick up some work shooting a couple of telefeatures with the wonderful Kevin Smith ( Aries from Xena etc ), we were mates anyway so working with him was brilliant. That was the most amazing year of my career and I have never come close to tha much work since! It feels a bit bizarre, on both jobs they really liked my work so expanded my roles, and then I have never really had a decent role since.

9. I’ve been toying with filmmaking and the more I learn about it the more complicated it becomes. Have you ever been involved in any other part of production besides acting?

I formed a production company with an Indian film maker who I think is a real talent. However neither of us is a producer and we did not get a producer on board so after about 18 months we wound up after shooting a couple of music vids etc. He shot a film called 1nite, which I rate as one of my most amazing film experiences. I didn’t even know we were shooting film when I did one night of filming in a real bar with him! I improvised under his direction with another actor. It was a crew of 2, him and his mate who was shooting us on what was a state of the art Canon XL1 digital camera, the first real break through affordable digital camera. 3 months later he calls me and asks if I want to come watch the film! I didn’t know he had shot scenes with other actors. I think it’s a stunning product for no budget, improvised dialogue and a crew of 2! I got it entered into the NZ film awards the next year where it won best technical contribution to a digital feature (the first year of digital awards in the NZ film awards!) and was runner up for best digital feature. A doco won the award, so really we were best digital ‘feature’

10. I see that you have a couple of films in postproduction this year. Can you tell us a little about them and your characters?

An incredibly low budget feature called Housebound has just garnered a bunch of deals in the US after getting rave reviews from the SXSW festival, and looks like getting some traction in other territories. I only have a couple of scenes but it’s great to see it get some attention as the film maker shot over 3 years because they kept running out of money. 3 Mile another low budget feature, self funded by the director, has got some great reviews around the place. Again 2 scenes for me! I have yet to have a lead role or a core cast role, so LOTR was like another planet to me. People tell me I’ve done so much, but the reality is most of the films and TV I’ve done, I have about 3-6 days work…believe it doesn’t pay the bills, as we kiwis did not get residuals! 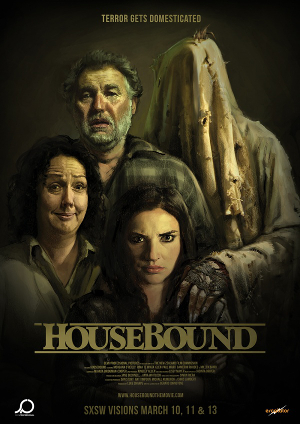 11. Were these latest films produced in New Zealand?

12. What are your plans for the future? More movie making?

Just did a couple days on a nice short film, I got paid $200 petrol vouchers!
My focus is my company ActionActors, a temp employment agency to find non acting work for actors between acting jobs…how I have made my living and raised my 3 kids. We have over 300 actors on our books, it does not pay me a wage yet, but we have paid out over $200,000 to actors between acting jobs to date1 So if you need some pepole for your brand activation/promotion, some hospitality staff, a gardener yadayaddayadda, you know who to call…ActionActors!

Bruce’s personal website can be found here (with even more Gamling Goodness!)