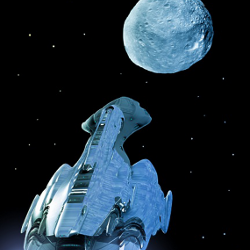 Today, a story of deep space, the wild ways of wildcatting and a glimpse into the future of mining the asteroids with Jack Clemons’ Tool Dresser’s Law. Jack has appeared previously in earlier incarnations of Amazing Stories and was a major contributor to our own first Relaunch Prelaunch issue in the Summer of 2012. (Which can be found in out back issues area.)

With artwork by Duncan Long.

It’s not that often that a story is reprinted in this manner – and this time it’s probably a unique occurrence – the same story in three different issues of the same magazine!