Mr. Cameron invites us to join him on the floor as he sorts the contents of a 1960s scrapbook

You can always tell when I’ve held a dictionary in my hands. Worse than a Thesaurus. Stupid things.

Anyway, I got to wondering what modern kids do nowadays to preserve memorabilia of their fannish enthusiasm.

Strongly suspect it involves data storage. As a result I fear young fen are condemned to a lifetime of transferring data from one obsolete platform to the next. Great fun for techno geeks, but the thought of it gives me high anxiety equivalent to a looming algebra exam.

The task was so much easier in my day. I used “Scotch” tape to place clippings from TV Guide and newspapers into a scrapbook. Simple. Efficient. Cost effective. Required no rocket science. Result easy of access. Another example of ‘primitive’ technology superior to modern techniques.

Flash! Aliens gave us adhesive tape! Without their intervention family albums and scrapbooks would have remained forever blank!

Wait a mo… ah, right, this is Amazing, not the Inquirer…

To resume, recently I hauled out my 1960s SF scrapbook from a bottom drawer and looked at for the first time in decades.

You know how every time you pull a copy of a 1930s Amazing Stories Magazine out of its protective envelope a fine residue of acid-eaten browned-paper-dust puffs into the air?

When I lifted the scrapbook all the brittle tape came loose and dumped the entire contents onto the floor, creating a sloppy pile of clippings turned every which way. Sigh. Got myself a cup of coffee and then sat down cross-legged to start sorting.

First up, a promo for a birthday bash celebrating the 150th anniversary of Mary Shelley’s ‘Frankenstein’ hosted by CHUM (a Toronto radio station). Turning it over, I see the “CHUM Hit Parade” listing for the week of March 18th, 1968. ‘Mighty Quinn’ by Manfred Mann came first, ‘Kiss Me Goodbye’ by Petula Clark was second, ‘Valleri/Tapioca Tundra’ by the Monkees third, and ‘Black Day in July’ by Gordon Lightfoot 48th. Ah, the good old days. 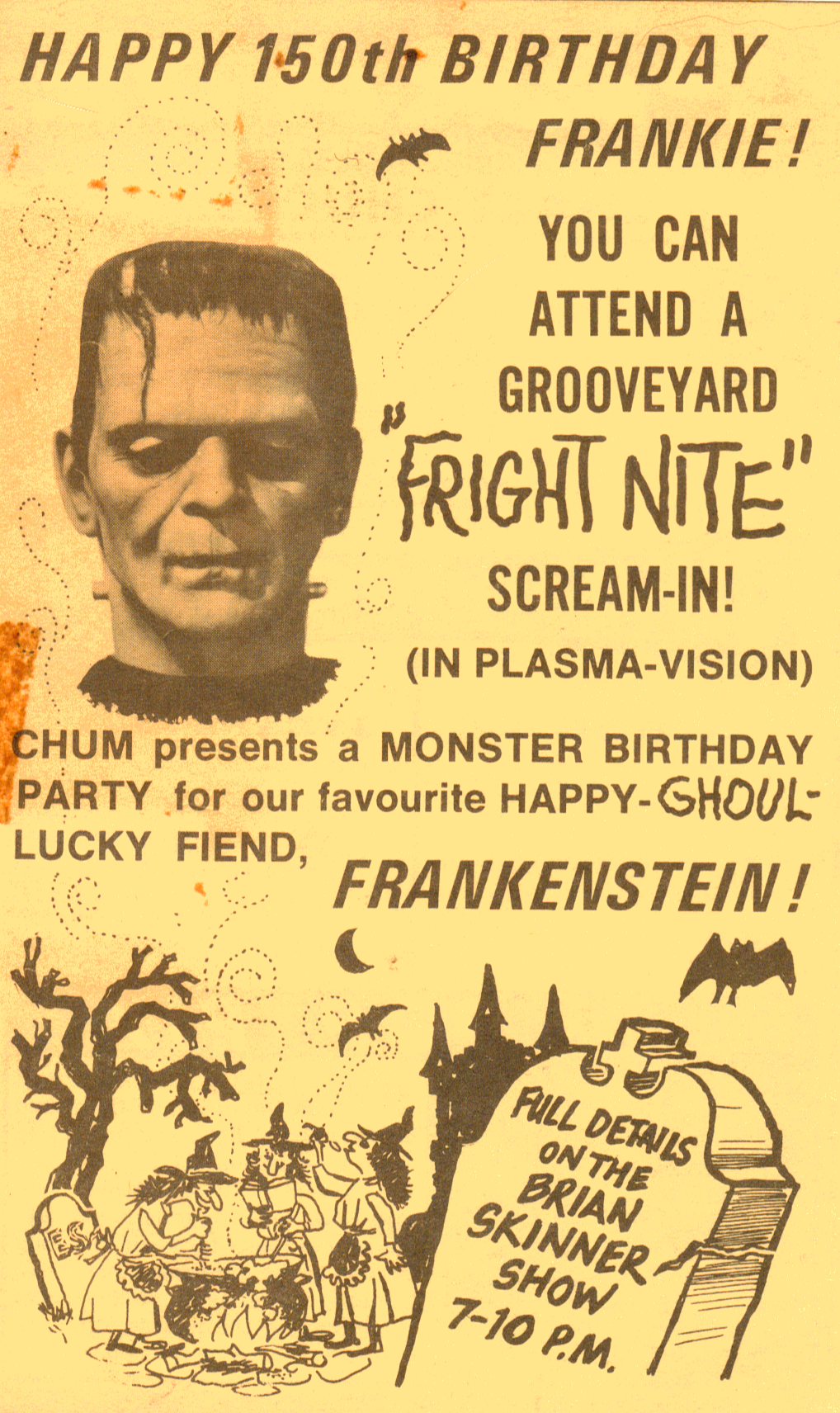 Second, enticing photos of bare-breasted women catch my eye. Flipping the pages over I discover a lengthy article on Forrest J Ackerman’s 40th birthday bash at the Ackermansion. What the heck kind of zine did I cut this out of? What was its target readership? Hard to figure. 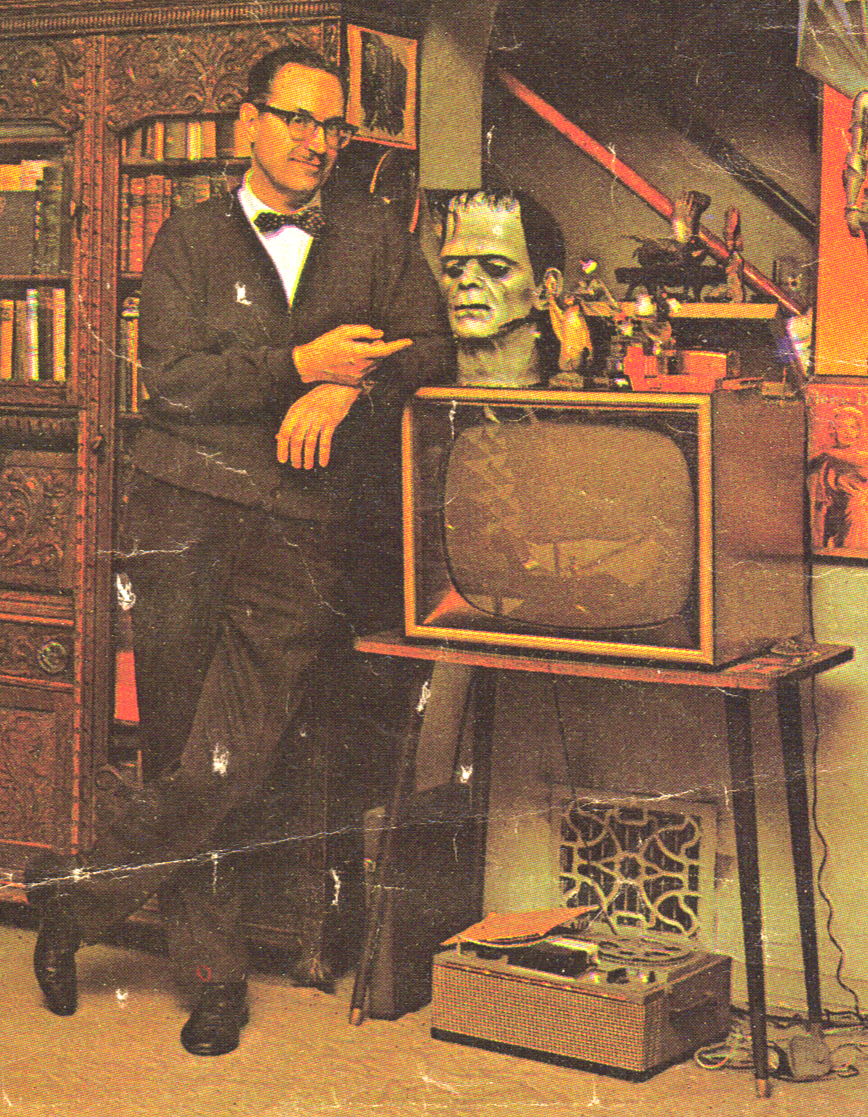 Ray Bradbury, a High School buddy of Forry, was at the party. Couple of interesting excerpts:

Someone asked for his opinion of Francois Trauffaut’s film of his novel ‘Fahrenheit 451’… Bradbury remarked that he thought the film was a good one, that Oskar Werner and Julie Christie were “just right.”

Someone asked when Bradbury’s ‘Martian Chronicles’ would go before the cameras. Bradbury chuckled and shrugged, and told instead of Herb Alpert’s interest in his play, ‘the Wonderful Ice Cream Suit,’ as a vehicle for the Tijuana Brass…

The article also features a number of colour photos, including the one displayed here of a fit looking Ackerman pointing at a Frankenstein mask atop a vintage TV. Note the tape recorder below sitting in front of a heat vent. What was he thinking?

Next I spot the headline ‘Star-studded Film for Casa Loma?’ The structure in question is a well-known Toronto landmark, a block-long stone ‘castle’ put up by a businessman who went bankrupt building it. He eventually wound up living rent free in the loft of the house owned by his former chauffeur. Sad.

Thing is, Samuel Arkoff of American International films claimed he was within 10 days of signing a deal that would see Boris Karloff, Vincent Price, and Betty Davis filming Richard Matheson’s ‘The Grave Side Story’ at Casa Loma for a movie to be called ‘The Castle.’

It was subsequently announced that the producer proposing the deal never had the financial backing he claimed to have and that was the end of the project. Pity. Casa Loma was only a couple of blocks from where I lived and for a week or so I had visions of hanging around the ‘set’ catching glimpses of Karloff and Price. Fate decreed otherwise. 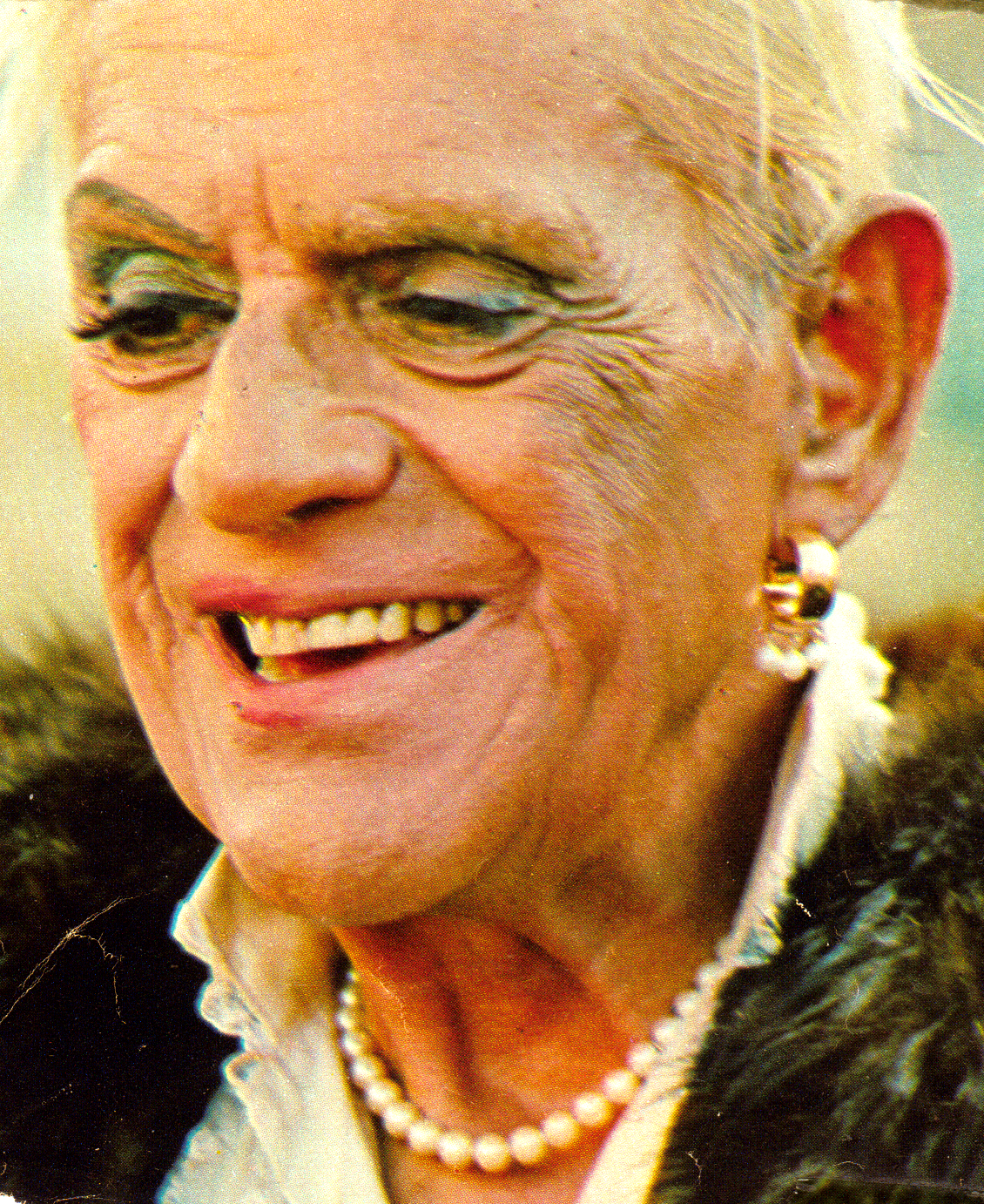 To illustrate Karloff I’m throwing in a TV Guide photo of him as ‘Mother Muffin,’ the villain of a ‘Girl From Uncle’ episode, sans the flaming orange wig he wore for the part. It was a delightfully droll episode as I recall. As usual, Karloff elevates anything he appears in. Forever watcheable.

Speaking of TV Guide, Isaac Asimov is at his sarcastic best in an article titled ‘What are a Few Galaxies Among Friends?’

Our science-fiction programs are, I am glad to report, accurate except for occasional slips like not knowing what a galaxy is, or a star, or a planet, or possible speeds, or actual distances, or the nature of space and time.

Everything else, like, for instance, the fact that men and women have two arms and two legs apiece, they’ve got PERFECT.

TV Weekly of The Telegram newspaper features a not-quite complimentary article on the TV series ‘The Time Tunnel.’

Producers of ABC’s new series ‘The Time Tunnel’ made the mistake of previewing it at the recent 24th World Science Fiction Convention in Cleveland, Ohio. 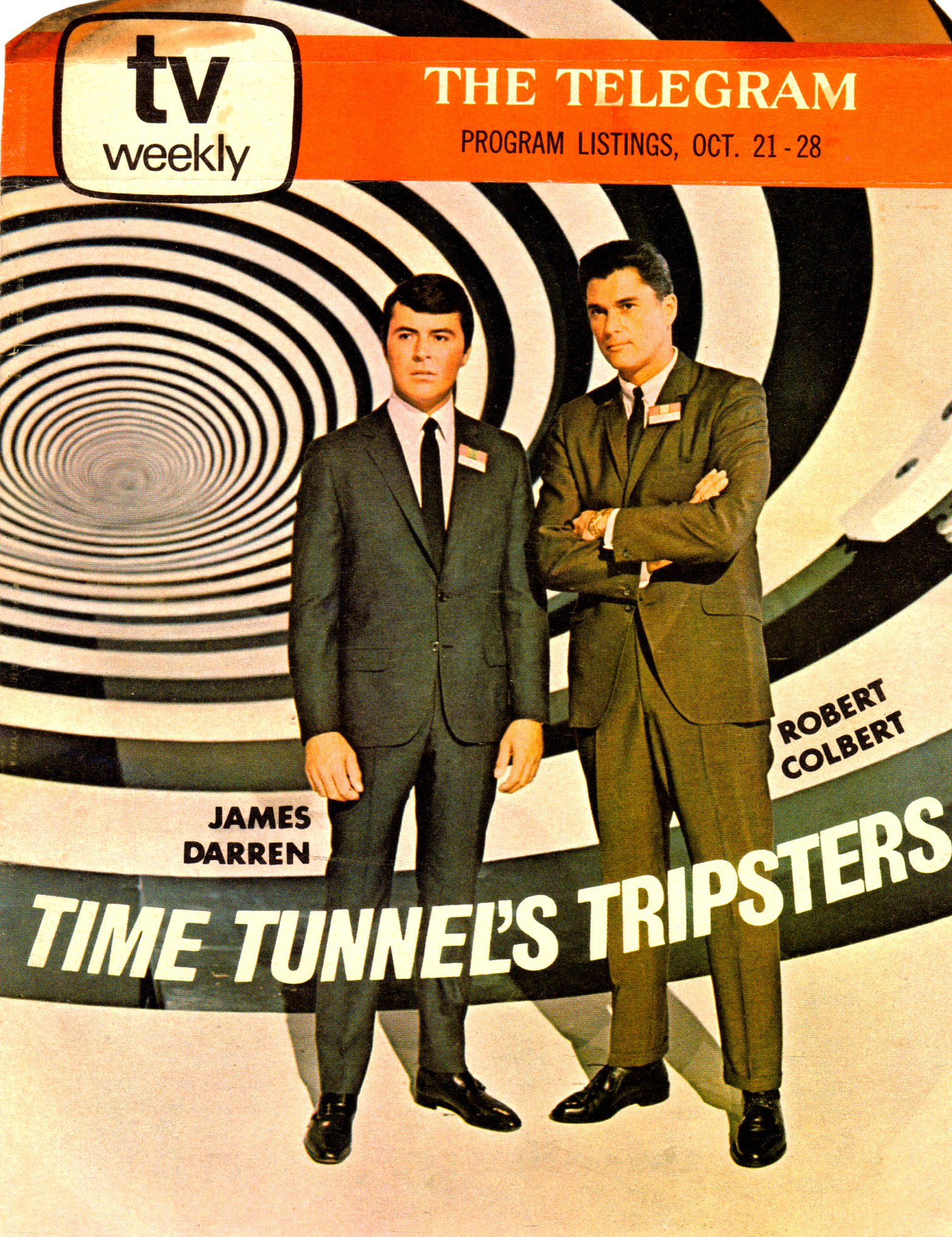 Producer Irwin Allen has described the series as “…entertainment in its wildest form. Let your imagination take flight! None of you, at any age, can conjure up the entire scope (of the Time Tunnel).”

A high priest of SF, Lester Del Rey, a talented and durable writer, said ‘The Time Tunnel’ would have suited a science fiction audience of 1928. Others claim he was being kind.

Not exactly a promotional piece.

What next? A Time Magazine clipping has interesting things to say about SF VS. Literature.

…critics and reviewers who confer literary status rarely know much about science or technology… Even journeymen practitioners of SF are likely to know more about literature than most [mainstream] novelists and critics know about science. And in the 20th century, ignorance of the fundamentals – and social implications – of physics, chemistry, biology and mathematics constitutes an embarrassing form of illiteracy.

And finally, film critic Michael Walsh (who, like me, moved to Vancouver in the late 60s and has been a member of the BC SF Association since its inception in 1970), wrote a review titled ‘Good News from Outer Space.’

Aficionados of science fiction, devoted as they are to the most exciting contemporary writing form, are often pained by the lurid titles that movie men foist upon their space epics. It’s not hard to despair of works carrying such improbable names as ‘The Terrornauts’ and ‘They Came from Beyond Space.’

Good motion picture science-fiction is rare and great s-f has NEVER been brought to the screen. [This twin bill] stands a full cut above the unfortunate fare usually offered the quality-starved fans.

I always thought of these two 1967 movies as bottom of the barrel. Makes me wonder which particular unfortunate fare Michael had been watching previously…

‘The Blood Beast Terror?’ ‘Don’t Play with Martians?’ ‘Dr. Frankenstein on Campus?’ ‘El Superflaco?’ ‘Monster Wangmagwi?’ All 1967 films. Must ask Michael next time I see him. 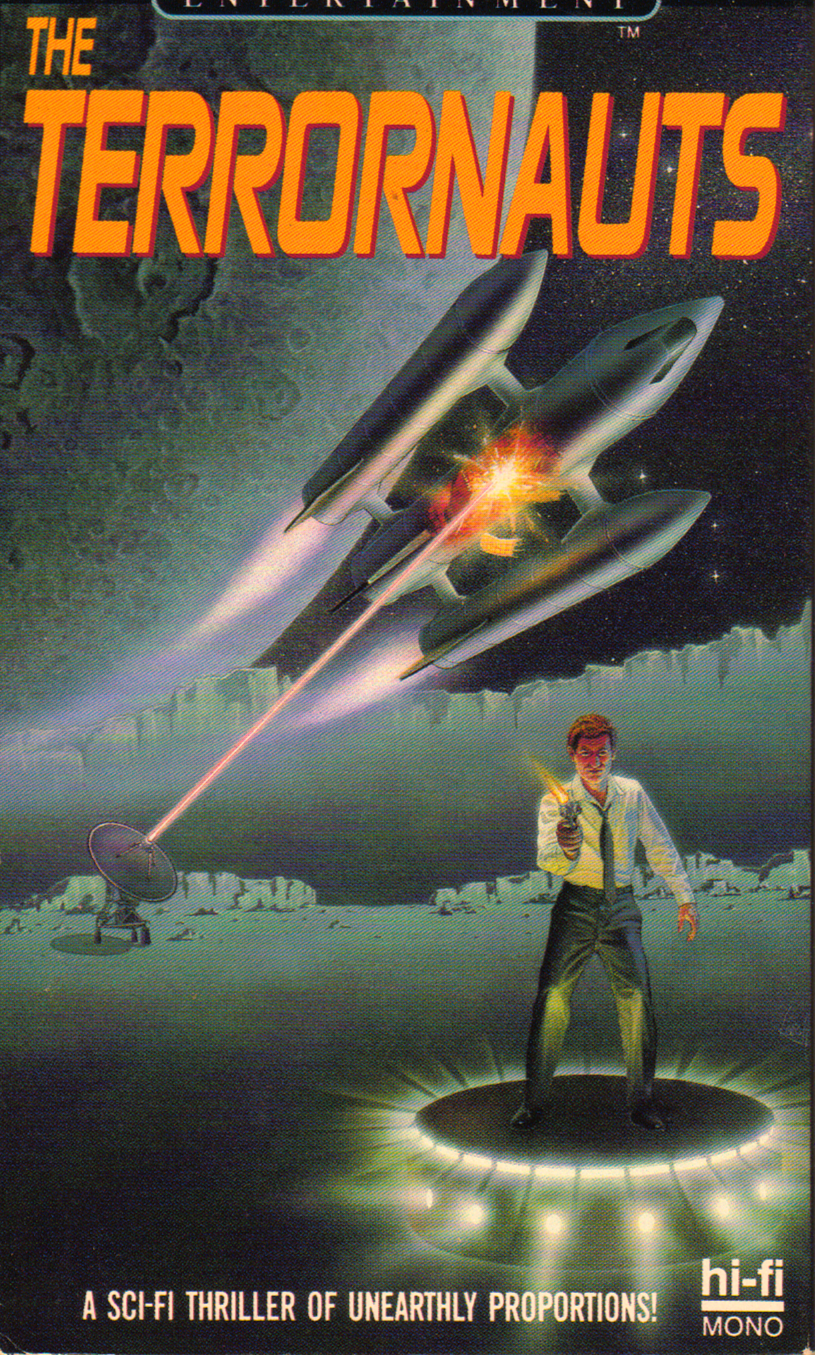 I know ‘The Terrornauts’ was based on the Murray Leinster novel ‘The Wailing Asteroid’ (which is fun to read), but I’m staggered to learn one of my favourite SF authors, John Brunner, wrote the screenplay. Considering Charles Hawtrey, one of the stars in the ‘Carry On’ British comedy films (the thin, weedy guy), is a major character in ‘Terrornauts’ and fits right in, it’s hard to believe we should take the film seriously, yet Michael comments that the tale is:

…tightly told and acted with little time wasted so that neither the plausibility nor the effectiveness is allowed to wear thin.

Really? That’s not what I thought when I saw it in the theatre, but bear in mind back then I was a self-proclaimed teenage ‘genius’ (ignorant snob) of a movie critic and probably rejected the film because I didn’t approve of its low budget special effects. I might think differently were I to watch it again. Besides, a brief notice elsewhere in the paper backs up Michael’s viewpoint:

‘They Came from Beyond Space’ and ‘The Terrornauts,’ a pair of better-than-average science-fiction thrillers from Britain provide a surprisingly intelligent treatment of the Mods and Rockets at the Downtown and its satellite theatres.

To conclude: hope you enjoyed this hodgepodge of 1960s views, attitudes and impressions of the genre we all love. There’s still a lot of column fodder in my scrapbook (or will be once I get it all pasted back in), including clippings dealing with the initial impact of the original ‘Star Trek’ TV series and the innovative and startling film ‘2001: A Space Odyssey.’ Expect to read more from my scrapbook in the weeks to come.

P.S. Don’t yell at me for calling my blog postings ‘columns.’ I’m an old phart. As far as I’m concerned I’m writing a weekly column for a magazine. If that makes you grit your teeth, see a dentist.

And now for something ambiguously different:

MR. GUESS-IT-ALL: Absolutely not! Camel Spiders ARE camels! Or rather, the larval form of same which herd owners tattoo with their mark before releasing into the wild to free-range and bulk up to a size adequate to transform the creatures into the ungainly but useful beast we all know and prefer not to meet.

Hence the famous Bedouin saying: Do NOT step on a Camel Spider lest you bring blood feud down on your family for generation upon generation.

Mission to Mercury Launched by Japanese and European Space Agencies

Fandom Needs to Change to Insure Its Future Survival