Many people, myself included, complain about how long it takes traditional publishing to get a book to market. Generally once the manuscript is in a final approved state it can take 12 – 15 months before it is available for sale. There are many reasons for this, including getting the book through production (cover, marketing copy, copy editing, layout, proofing, etc), but a big part of this has to do with promotion…getting the word out prior to release. So I’m going to use my upcoming book Hollow World as an example. Let’s take a look at what I call the “long pole” items—the things that should really start at least six months prior to release.

The first thing you need, and you really can’t start early enough, is the cover. I’m actually going to do a post on this in the near future about how to get a good quality cover, but for now let’s just say that it’s important to have it before anything else. The reason is simple…you are going to use the cover in almost every promotional activity that I’m going to talk about. For marketing copy, I’m referring to that single SHORT one paragraph that generally would appear on the back cover of the book (or the description for online books). I just realized I’ve not written a post on this previously, so I”ll add that to my list as well. As an example, here is the marketing copy for Hollow World:

THE FUTURE IS COMING…FOR SOME, SOONER THAN OTHERS

Ellis Rogers is an ordinary man, who is about to embark on an extraordinary journey. All his life he has played it safe and done the right thing, but faced with a terminal illness he’s willing to take an insane gamble. He’s built a time machine in his garage, and if it works, he’ll face a world that challenges his understanding of what it means to be human, what it takes to love, and the cost of paradise. He could find more than a cure for his illness; he might find what everyone has been searching for since time began…but only if he can survive Hollow World.

I’m the first to admit that I need to work on my websites. I actually have three and I need to bring them together as one. But as my main site was riyria-centric I actually made a whole new site for Hollow World. 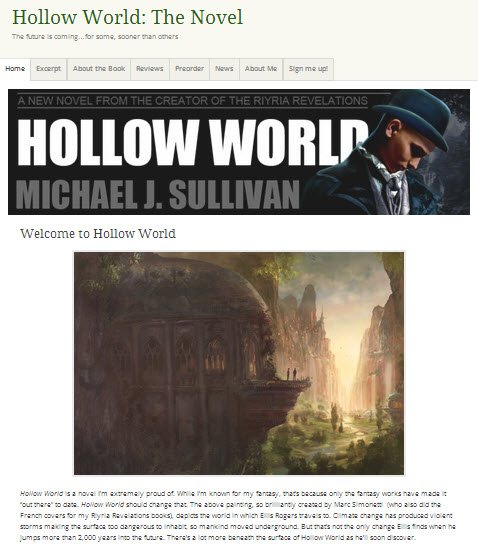 It’s important to have a place where you can talk about the book with your readers and the sooner you get it out there the better.

I’m actually going to make an entire post on this, but for now it’s important to note that you need to have places to send readers so they can buy the book early. When traditionally published, this is pretty easy (as your publisher does this for you), but you often aren’t notified when the books become available, so it’s important to keep en eye out for them. If you are self-published, there is a bit more to this, and as I said, I’ll fill out full details in a future post.

Even if you have nothing more than the title, cover, and description it behooves you to put the book up on goodreads.  For the self-published author, it will be difficult to get a pre-order pages, so the goodreads page will serve as a place to send people so they can at least at it to their shelves. To add a book to goodreads follow these simple steps.

Getting on people’s goodreads shelf

Once you have the books on goodreads, it’s time to tell people about it and encourage them to add the book to their shelves. Doing so will increase the visibility (and discoverability) of your book, but also will send reminders to people when the book goes live (which is why it is so important to keep that release date updated if it changes).

Using goodreads to effectively get the word out goes much beyond this post. It is actually a series of topics, and I’ll add that to my long list of posts to write. In the meantime, here is a link to a reddit post I made on the subject: An Author’s Guide to Goodreads. One of the things that post talks about is tracking your results, which helps you to know how successful you are.  Here is the graph of my “Added to Shelf” for Hollow World data. 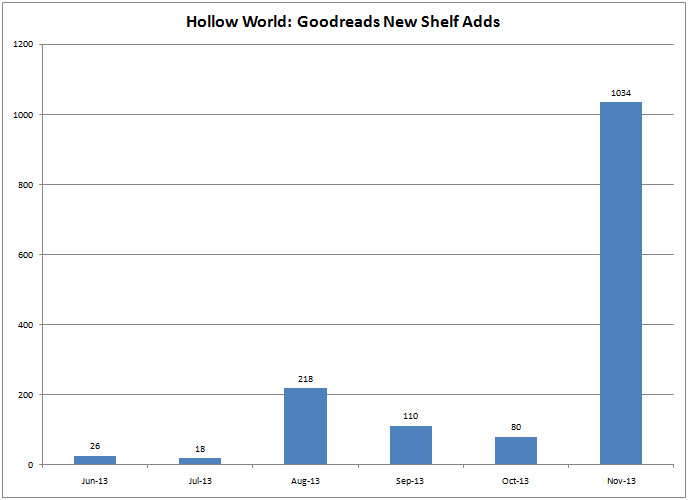 As you can see, I added the book to goodreads in Jun, which was 1/2 a year ahead of it’s planned launch on January 20th (current release date has pushed this back to April 15 because the book was picked up by a science fiction publisher) and in the early months, before I was working to get the word out just a few adds occurred organically. Staring in August I started talking up the book to people in my goodreads “inner circle” and as such they started adding it to the list. Through September and October I didn’t do a lot in the way of promotion, but I did mention it from time to time and people were starting to talk up the book so it’s “organic” numbers were about five times as it was in the beginning. I’m sure you are all wondering what the heck happened in November to get the book so much attention. Well it’s simple…I have a giveaway running (until December 5th, for signed and numbered copies of a limited edition hardcover. I talked previously about how important goodreads giveaways are. If you want to learn more about that see my previous post: Marketing 101: Book Giveaways

This is actually the stage that I’m currently in. Usually ARC’s (Advanced Reading Copies) go out to reviewers a month or so prior to the release, but I would like to have quotes from various industry leaders in the printed copy—so I have to…well…start early. I’ve already had a number of people finish the book and provide me with some nice quotes (which of course I’ve posted on my website) and since the book’s layout is still being finished, I’ll be able to use some of these quotes.

A successful book launch takes planning, and time to build enthusiasm “and buzz” for the book, so you have to plan ahead and put initiatives into motion long before that initial release day. I’ll be doing follow up posts about what to start at other key stages (like two months out and one month out). It helps that I’m doing a launch right now and you all can follow along with what I’m doing. This post also brought up a number of topics that I have to expand on, and I’ll be putting them out in future posts. That’s one of the great things about this site, I’m never out of ideas for more posts…there is so much to learn and do with regards to publishing, especially these days.