I’m often asked what is the “biggest bang for your buck” from a marketing perspective, and the answer is hands down: Book Giveaways.  But here’s the thing.  They have to be done the “right way.”

Making a book for free on your own website isn’t the answer, and I’m surprised why so many authors do it this way.  Let’s take a step back and think a minute.  If someone is going to your website, they already know about you and your books. You are essentially advertising to your echo chamber.  Sure it’s a nice thing to give your fans something free.  So if you want to do one there to thank those are supporting you…so be it.  But don’t fool yourself into thinking you’ll going to get new people learning about your books, even if your intention is to tweet about your giveaway hourly (which by the way will just annoy people and get them to stop following you rather than getting people to sign up.

What you need, is a place that already has reader’s eyes captured.  A place dedicated to readers, and where people are always looking for something new to checkout. Luckily for you there is just such a place…Goodreads!

A few days ago, Orbit ran a giveaway for my The Crown Tower that is coming out in about 3 weeks.  Here is the link so you can see what a goodreads giveaway looks like.  Orbit made it available to US residents only (overseas shipping) can be a pain) so I ran a parallel giveaway that was open to both US and internationally.  I put up a small survey using PollDaddy where people could add their names and the copy given away would be signed (as they were coming directly from me).  Since those outside the US were prohibited from the Orbit giveaway, I let any International people get “2 slots” into the drawing and just one for the US people (PollDaddy tells you (based on IP address) where the people filling out the survey were from so it was easy for me to give the non US people an “extra” entry.

How did it turn out?  Well the goodreads giveaway had 902 entries (for 10 books) and my giveaway had 502 entries.  That’s over 1400 people who at least know my book exists.  The 502 people who did “my survey” are now potentials for my mailing list. (I forgot to add a question indicating whether I can mail them in the future (but I will send them one now on just that subject).  We’ll have a whole post or two on mailing lists as they are essential tools for any author. But here’s some more tangible data on the giveaway that was run. 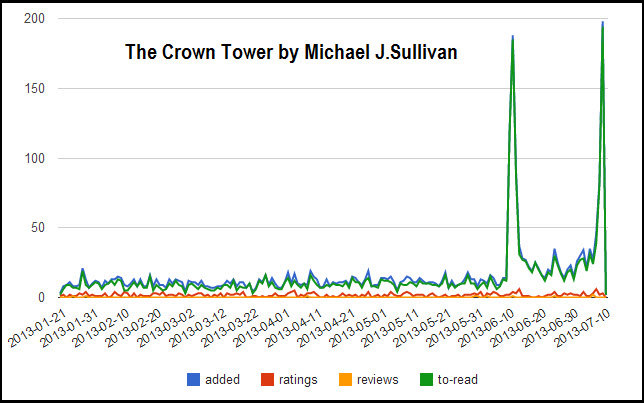 One thing to note…at the present time goodreads only does giveaways for “physical books,” but even a self-published author can get a few copies via print on demand from places like Lightning Source or CreateSpace. When setting up your own giveaway here are my recommendations:

We’ll discuss the last bullet in later posts, but the bottom line is – to direct lots of eyeballs at a book that doesn’t look like it will be worth someone’s time..is a waste of the giveaway.

So there you have it. The single biggest promotion for you to do, and I venture that few are actually doing it. Next time we’ll talk about walking before you run, but as this giveaway for my books just ended – I thought it was best to bring it up while the results were fresh in my mind.

The Artful Collector: Handling Difficult People Part 3 – What makes Artists and Collectors Fun to Deal With?

Well it looks like I put my foot right into it in my previous post! Several people objected to my definition of the term “Fan Art”. They felt that it was not in accordance with how “Fan Art” has historically been defined and used within Fandom, and how it is still defined with regard to the […]