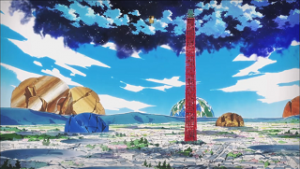 Kyousougiga #8 — So it’s that little experiment with Bishamaru (the giant robot) that seems to have caused the real trouble. Aratama coming into contact with something else made of the same stuff not only cracked open the elder Koto’s hiding place, it started a chain reaction which is now endangering all of reality. Um, oops?

Something finally made clear when the younger Koto is told “You’re the child of a god and a buddha” is that we’re also dealing with the old sf trope of the gods being real, but actually alien beings. Inari is one of the more notable deities in the Shinto pantheon, and is traditionally associated with foxes which are his messengers.

This would make the chief priest… erm… I’m not sure, actually. The head of the Shinto pantheon is Amaterasu, who is female. 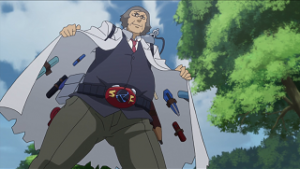 Samurai Flamenco #9 — Aliens? Already? This series is supposed to last through the end of March, so what the heck else is it preparing for us?

I’m really not prepared to guess which way it’s going to jump next, although I’m still sure Masayoshi’s grandfather’s alleged old friend is mixed up in it. But here are some possibilities to discuss among yourselves: 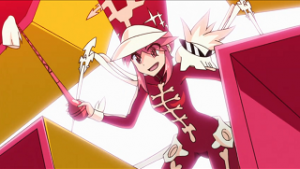 Kill la Kill #10 — Two down, and probably one more next episode! If Gamagoori was the disciplinarian trying to force Ryūko to behave like a proper young lady, Jakuruze with her band is the kinder, gentler face of accepting conformity and being a team player. I guess Inumuta is supposed to represent the creepy stalker archetype.

Now, how shall Ryūko face down the crushing power of John Philip Sousa? If she has to adapt to the theme of her opponent’s tactics again, I can only assume that means a transformation into an idol singer next week. 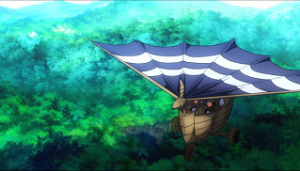 Galilei Donna #9 — After Hozuki has spent so long enthralled by Galileo’s messages to some mysterious person, it turns out she is that person. I had not seen that coming. Did she have some inkling? We’ve never seen most of the papers she found in the attic along with the amulet. It would go a long way toward explaining Hozuki’s overwhelming drive to build the Galileo and take that trip if she had stumbled across a letter addressed directly to her. (Although it would then bring up the problem of circular causality. If the amulet gets left behind in the Renaissance and turns out to be in a time loop where it never actually gets created, that will be especially annoying.)

Anyway, why is an Italian blond almost to the point of albinism? That’s just a standard visual for representing a white person in anime. Odd to Western viewers, but not to the intended audience of 13-year-old Japanese girls. And why does he have a flying machine? I guess all the mythology that Leonardo da Vinci has been given in the English-speaking world has accrued to Galileo instead in Japan. This really is Japan’s answer to The Da Vinci Code.