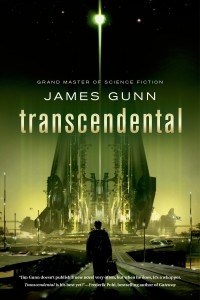 Few characters, and people, start off with the intention of winding up where they do. There are the few who succeed at their childhood dreams. The astronauts, the politicians, the firefighters (though I imagine these occupations are far different than what the childhood dreams imagined).

The point is, we all begin with either a specific or vague idea of what we want to be, and that rarely comes to fruition. Disillusionment accompanies this revelation. You realize you’re not who you wanted to be, and you can either bitterly embrace it, let it kill you, or let it eat away at you until you’re broken.

James Gunn’s latest book has taken a bit of flak from critics. And when I say critics, I mean people on Goodreads who admit they didn’t finish the book because they couldn’t get over how none of the aliens in the book had any back-story. Apparently, they didn’t get to the part where all the aliens are given back-story.

The reality is, whether you like Gunn’s style or hate it, Transcendental is a fascinating book filled with interesting characters, universe, and plot. Though each of the aliens is given a back-story, the focus is entirely on Riley.

Riley dreamed of peace. Growing up, he wanted to either be a politician or inventor. He wanted to be someone who mattered, and he wanted to make the Universe a better place. Humans had only just struggled beyond the edges of our system, and we found a universe already occupied and owned. Dozens, if not hundreds, of species lived in their spiral arm of the galaxy.

So when the war broke out — because, you know, of course a war would break out — Riley volunteered, believing it to be his duty. He figured, I’ll fight for humanity, and in the peace that’ll follow, I’ll realize my dreams and make a difference.

Only, he didn’t. The war trained him to be a killer. However, the war was so brutal that, when the aliens and humans signed a peace treaty, they vowed to never again go to war.

Whatever aggressor started another conflict, would be eliminated by all the others. An ultimate stand-off.

In a universe dedicated to peace at all costs, Riley was a relic. His soldier skills had no practical application anymore. He wasn’t an assassin, trained for covert espionage. He wasn’t some sort of genetically enhanced super soldier. He was just a grunt. A grunt with war wounds.

This was Riley’s fall. Somehow, the universe had passed him by. Why wasn’t he able to accomplish one thing he had wanted to? What was he supposed to do now? He was one man among billions in the same boat. Nothing about Riley stood out. He was too old, too battered, too broken.

So he turned to drugs. Actually, he turned to stims (which are these virtual reality things, but for the sake of brevity, let’s just call them drugs). He had a woman, but she became disgusted with him. He had been strong once, and brave, and true. Now he was an addict.

She left him, and he was alone.

This, however, is not the Riley we get at the beginning of the story.

No, the Riley we first meet has a mission.

All this back-story serves as a single chapter later in the book. It explains why Riley is aboard a ship full of pilgrims, and aiming to kill one of them.

There’s a new religion (sort of) sweeping the galaxy called Transcendentalism. A Prophet is out there, telling people that there exists a machine that can immediately transcend whoever uses it. Their imperfections will be wiped away, and they will achieve their potential as a species.

This freaks a lot of people out, especially those in power. If one species were to gain control over this machine, they would be more powerful than everyone else. Either all should transcend, or none. The fragile peace that now exists would be shattered.

So a group of pilgrims is formed, with a creature from every race imaginable, and sets out in search of it. They all have their own agenda, they’re all liars. One of them is the Prophet.

He’s so broken, he needs something — anything — to give him a purpose. So he does this. It promises adventure and mystery and romance and a near zero-percent chance of survival. He takes it because he believes in nothing anymore, and feels that this is his only real option.

So we find Riley at the beginning of Transcendental, doing his best to figure out who the Prophet is.

What follows is a fascinating tale that you can’t appreciate until you’ve read between the lines.

Needless to say, Riley’s journey is an interesting one. His is the tale of the man who believed, then lost said belief, but comes back to it. I don’t want to spoil anything, but Riley’s journey alone is reason enough to read this book.

James Gunn’s Transcendental is one of my recent favorites. It’s definitely worth a look.