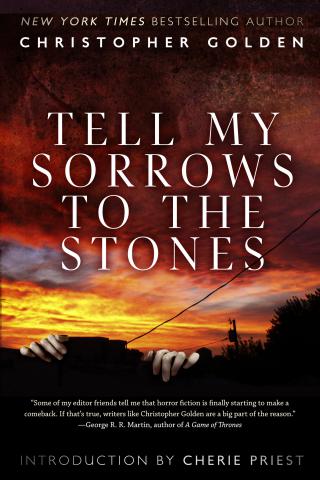 It’s week five of Six Weeks of Scares. This time out, our subject is a single author collection, namely Tell My Sorrows to the Stones by Christopher Golden. Golden’s work has been highly acclaimed and in horror circles he’s well respected.

This book contains a dozen reasons why that’s the case. Golden’s work is of the quiet school of horror, much like that of the late Charles L. Grant. The selections presented here have a wide range of tone and subject matter.

“All Aboard” concerns a grieving mother’s attempts to reunite with her dead son who is trapped on a ghost train. In “Under Cover of Night,” the supernatural horror encountered by a soldier in the desert pale in comparison to the lengths his government is willing to go to accomplish its goals. “Put on a Happy Face” tells the tale of a clown who discovers that being funny is no laughing matter. A young husband and father discovers the price he pays to survive a cave-in is more than he bargained for in “Breathe My Name.”

A negotiator learns the darker side of “The Art of the Deal;” a story that didn’t end up where I thought it would. A cowboy’s ghost helps a young boy defend his mother with a gun that fires “Quiet Bullets.” The sounds a grieving widower hears through the “Thin Walls” of his hotel room aren’t what he thought they were. Golden teams up with Mike Mignola of Hellboy fame to build a machine that can reach beyond the veil of death in “Mechanism.”

A railroad magnate discovers more secrets than he wants to know in “The Secret Backs of Things.” A father-to-be learns that more than just his wife has “Nesting” instincts. A young girl on the verge of womanhood learns a secret about herself in “The Mournful Cry of Owls,” a story that uses Albanian folklore as its basis. The final selection, “The Hiss of Escaping Air” tells the tale of a Hollywood wife and the lengths she goes to to get revenge on her husband and the worse lengths she goes to when that revenge goes wrong.

Golden’s strength is his characterization. Most of his characters are sympathetic. That’s not the case with some horror writers, who give us some pretty despicable people. There were a few viewpoints that I had trouble relating to (I’ve never been a Hollywood producer’s wife, for instance), but most of the characters were people I had at least some common point of contact with, whether it’s a rebellious teen, a man grieving a lost love, or a soldier realizing those he answers to are morally bankrupt.

If I had to select a common theme that runs throughout these stories, it’s that of secrets.  Some of the secrets produce horrors, some of them come about because of the horrors the characters encounter.  But almost all of the stories deal with secrets in one form or another.

Another thing I noticed is that Golden doesn’t go for the easy resolution. “The Hiss of Escaping Air” has a truly horrifying ending, as does “Breathe My Name.” They’re tough, unflinching, and show us people who do what it takes to survive, even if the consequences are unpleasant. On the other hand, “All Aboard” gives a perfectly satisfying conclusion, one that reaffirms life.

Golden is a talented and versatile writer, one who is worth reading. He’s been quietly building a name for himself for years now. If you’ve not read him, do so and find out what the rest of us have known for quite some time