Home Fandom Fred and Me 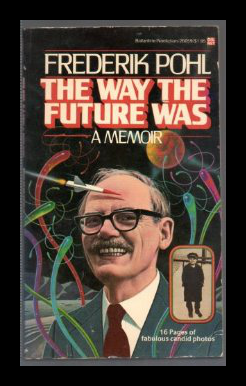 On Monday, as LoneStarCon 3 was winding down and Closing Ceremonies were beginning, I received word that one of the elder statesmen of science fiction, Frederik Pohl, had died. Pohl had entered the hospital in respiratory distress earlier in the day and a few hours later left us. He was 93 years old.

When I started attending Windycon in 1986 (my first SF con), I met Fred for the first time. He was a newly local author, having moved to Chicago when he married Professor Elizabeth Hull in 1984, and a science fictional icon. Frederik Pohl, who won back-to-back Nebulas in 1977 and 1978 for his novels Man Plus and Gateway. Frederik Pohl, who (at that time) had won six Hugos, three for editorialship, two for short stories, and one for his Nebula Award winning novel, Gateway. His most recent Hugo had been presented only a couple months before I met him at ConFederation. Frederik Pohl, who was one of the founders of fandom, who had been excluded from attending the first World Science Fiction Convention in 1939, by which time he had already published professionally. Frederik Pohl, who served as editor of Galaxy, If, Astonishing, and other magazines, who bought Samuel Delany’s Dhalgren and Joanna Russ’s The Female Man. Frederik Pohl, who was an agent to other aspiring authors.

You get the idea.

A few years later, when my wife and I moved back to Chicago I had the opportunity to talk to him again. He commented that he and his wife, Betty, would have to have me out to their house some time. I was young. I was a nobody fan. I was flabbergasted. I took it as a gracious hero of science fiction being polite to a fan.

When The Gateway Trip was published, I approached Fred, Mr. Pohl, with a copy of it, asking him to autograph it. He looked at it sideways and got a huge grin on his face, like a child who was just told that not only was school cancelled for the day, but that he would get to go to the local candy store and eat anything he wanted. “I haven’t seen this yet! Do you mind if I look through it?” How could anyone say no to that.

Over the years, I got to see Pohl at Windycon and Capricon, spoke to him with greater frequency, and, shortly after I was appointed to run programming for Chicon 2000, that year’s Worldcon, I appointed his wife to co-run the academic track of programming for me. That meant meetings and I finally made it to Fred and Betty’s house for lunch, as Fred had suggested all those years before.

At Chicon 2000, I overheard someone excitedly say “I have to get to the other side. Frederik Pohl is speaking.” And I thought “It’s only Fred.” And then I thought, “When did I become so jaded. It is Frederik Pohl!”

After Chicon, my relationship with Fred continued to grow. When I edited the anthology Horrible Beginnings for DAW, I needed someone to write an introduction to “The Graveyard Rats,” the debut story by Henry Kuttner. Who did I know who knew Kuttner? Frederik Pohl, had written a pseudonymous fan letter to Weird Tales upon the story’s initial publication. This gave me the chance to commission a piece, however brief, by Frederik Pohl.

Betty announced that she would be co-chairing the annual meeting of the SFRA (Science Fiction Research Association) in Chicago in 2004, naturally, I joined her staff. More meetings…more visits to Fred’s house.

As part of the bid to host the 2012 Worldcon, I was responsible for publishing a series of mini magazines, bidzines. Each would have a piece of cover art, a 2,000 word story by an author associated with Chicago, and fit, microscopically, on a single sheet of paper, folded into eight pages. At Denvention, we issued the first bidzine. The first issue, called Confounding SF, had a reprint of a Frank R. Paul piece of art (originally published as the back cover of Fantastic Adventures, 1946) and Frederik Pohl’s story “Bialystock Stronghead and the Mermen.” Thrilled to have published an original short story by Frederik Pohl, I urged him to publish more short stories. I didn’t want this trifle to be the final short story he published (he published one more short story, “The Saved,” published in Sentinels: In Honor of Arthur C. Clarke).

In 2010, Frederik Pohl was nominated for a Best Fan Writer Hugo by the membership of Anticipation and Aussiecon IV. Fred was unable to travel to Australia for the ceremony, where Robert Silverberg accepted the Hugo on Fred’s behalf. A Chicago fan brought it up to Chicago and gave it to me to present to Fred. I drove out to Fred’s house, where he was working on the novel All the Lives He Led. He turned away from his keyboard, a smile on his face I recognized from when he first beheld The Gateway Trip, and I presented him with his seventh Hugo Award, standing next to a case which held the numerous indications of the esteem he received from science fiction fans, writers, editors, and other professionals.

The night Fred died, I was at Worldcon. I wrote Betty, “It is rare that someone who you first come to know as an icon becomes a human and a friend, and that is what happened with Fred in the years that I’ve known him.”

So those are my thoughts on Frederik Pohl. Just after getting the news, I wrote a more traditional, if brief, obituary for SF Site and a slightly longer one for SFWA. But this is about Fred and me.