Happy new year! Having survived another trip around Sol, it’s time to take a look at the absolute best in science fiction, fantasy, and horror that the anime world had to offer. I’ll list these in reverse chronological order to make up for the fact that the ones from the first half of this year already had a post showcasing them.

For anime newbies, I’ll add links to the weekly commentaries that included them, which include cultural notes and explanations of cross-medium references where they become essential to understanding what’s going on.

For Hugo voters who check these out and want to nominate any of them, I’ll also include the relevant credits the Hugo ballot is likely to ask for: director, primary studio, and head writer or closest available approximation. (“Series composition” means the person set up the overall story and decided what should happen in each episode; it may or may not include working with the individual episode writers.)

If there’s any additional info you need, I strongly urge avoiding IMDB, which is unreliable for anime, and consulting the Anime News Network encyclopedia instead.

And finally, if you’re totally new to all this and it seems daunting, anime fans have a rule that if a series doesn’t grab you by the end of episode 3, it’s okay to write it off. And you can ignore that rule. If one episode doesn’t do it for you, you’re free to go and try something else. (Except maybe for Death Parade, which takes two episodes to introduce the protagonist.)

A series of short, tense horror tales about monsters stirring and encroaching on the human world. Though there is an overall plot, Kagewani is at its best with individual episodic encounters that pit human ingenuity against overwhelming monstrosity.

(It’s tempting to recommend the entire series under Best Dramatic Presentation Short Form, but alas, even with short episodes, the combined length is still about 12 minutes too long.)

When the zombie apocalypse happens, the cute and quirky girls of the Living At School Club are the only ones to survive, and the result is absolutely nothing like what you’re imagining after reading that description.

Discussing why this show works so well is utterly impossible without a ton of spoilers. Even the very first episode contains a big surprise that transcends the subgenres it’s built on. What emerges is a mature and serious story about standing up and facing life, an ultimately uplifting tale but one that will rip your heart out and stomp on it along the way.

It does not matter what you think of zombies, hyper-cute art, or high school shows. You still need to check this out.

Series composition: Norimitsu Kaihō, based on comics by Kaihō and Sadoru Chiba

If you think idea-driven sf has long since died out on TV, you need to watch more anime. Particularly this anime, which examines the consequences of bringing more and more human activities into a hyperconnected world.

Near-future Japan is enjoying the fruits of a new technological innovation which essentially gives people superpowers through a smartphone app. Unfortunately, it’s as subject to trolls and griefers as anything online. And then a helpful alien shows up, trying to bring about world peace, and there are enough good intentions to pave a road to a hell which is familiar to anyone who has been on the Internet for a while.

insight is able to juggle a dozen different opinions without preaching, except to say: Just stop and really think once in a while. 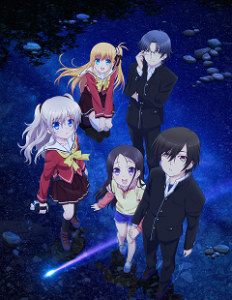 An unsual take on the teenagers-with-superpowers genre: what if the powers were literally a disease? One boy with a particularly handy power is on his way to being a supervillain when he is found out and recruited into a group tasked with protecting other gifted teens from unscrupulous scientists and their own foibles.

Charlotte grows slowly from an odd little high school drama to international intrigue to a grand attempt to change the world. Most of its episodes are separate enough that they could be considered short-form candidates, particularly the tour de force of a finale that packs an entire epic into 24 minutes.

A good old-fashioned romp of an action series with a multi-ethnic team of manly men travelling to exotic lands and getting into scenery-destroying psychic brawls with evil manly men. And occasionally women. And a few animals, and, in one case, a seemingly inanimate object.

What makes this great is the level of creativity that keeps you (and the heroes) guessing about what off-the-wall power they will face next, coupled with a macho level so high it’s absurd and the author’s love of international tourism. In between slugfests, the action may stop entirely for a minute so that the narrator can expound on topics like the natural wonders of the Red Sea or the mechanics of haggling with a street vendor in Karachi.

Stardust Crusaders builds on two earlier story arcs, but never fear, the first couple episodes will get you up to speed.

Series composition: Yasuko Kobayashi, based on comics by Hirohiko Araki

In the afterlife, souls are paired up to play a game, through which their personalities are fully revealed. Sometimes the game is lighthearted; more often, it’s dark and brutal.

Into this system steps the Dark-Haired Woman, a soul stuck in the first stage of the afterlife because she couldn’t be properly judged. At first, she simply serves as an assistant and observes, but in time she comes to realize that something is wrong with the entire system and starts trying to change it.

Yona of the Dawn

Like swords and sorcery, but sick of fantasy worlds based on the same old medieval European tropes? Yona of the Dawn‘s setting is essentially Korea in the AD 400s or so. After Princess Yona’s cousin kills her father, the king, Yona flees the palace and finds her way into a prophecy about bringing together the descendants of the dragon warriors sworn to protect the kingdom.

As Yona follows her quest and develops from a spoiled brat into a warrior, though, she learns that not all is as it seemed when she lived in the palace. Her father may not have been the harmless, good-natured bureaucrat so many people remember him as, and the usurper may actually be the ruler that the kingdom truly needs…

Series composition: Shinichiro Inotsume, based on comics by Mizuho Kusanagi

At the outset, it was easy to describe: a Sailor Moon parody, only with an all-guy team! But Cute High grew far beyond that to become a celebration of friendship and love for one’s fellow humans that most magical-girl shows can only dream of being.

Highlights include an outstanding metaphor for depression, an examination of what makes men respect and admire other men, and, for the finale, a message about the creative industries that no fan can disagree with, all delivered with a razor-sharp, self-aware comic wit.