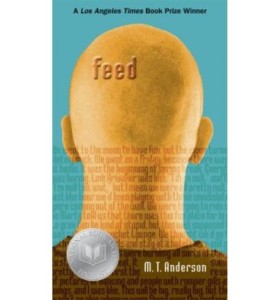 There’s a memorable scene in M.T. Anderson’s YA novel Feed, which was a finalist for the National Book Award, a Boston Globe-Horn Book Honor Book and the winner of the Los Angeles Times Book Prize for Young Adult Fiction. I didn’t love it that much, but a couple of scenes really stuck in my mind and one of them is when protagonist Titus and his girlfriend Violet visit “beef country,” a.k.a. a steak farm. It’s like going on a brewery tour, except at this farm, the vats are full of meat. For purposes of coolness, Anderson has the beef growing in open fields as far as the eye can see, “and in some places where the genetic coding had gone wrong, here and there, in the middle of the beef, the tissue had formed a horn or an eye or a heart blinking up at the sunset …” How unhygienic! And how memorably disgusting. It’s enough to turn you vegetarian.

I recalled this scene recently when I read about the world’s first vat-grown burger. According to the BBC, “Scientists took cells from a cow and, at an institute in the Netherlands, turned them into strips of muscle that they combined to make a patty. One food expert said it was “close to meat, but not that juicy” and another said it tasted like a real burger. Researchers say the technology could be a sustainable way of meeting what they say is a growing demand for meat.”

A lab in Holland is not quite rolling fields of filet mignon as far as e’er the eye can see, but life is imitating art once again and I have no doubt we’ll get to beef country in the end. You see, carniculture is one potential piece of a comprehensive technological solution to the problem of anthropogenic climate change.

I’m a climate change sceptic. That means I’m not convinced that anthropogenic climate change is happening, or that it isn’t. But I do know that Earth’s climate changes, with or without human help. Sometimes it happens rapidly. And I do know, too, that there are more people on Earth than the planet can support in the style to which we in the rich world are accustomed. Even if we’re going to see an overall global population decline in this century, as I expect, the convergence of living standards will generate a much higher demand for electricity, cars, nice houses, iGadgets, designer bags, pets, and beef. Etc., etc. So we either have to come up with more efficient means of producing these things (and disposing of them!) or deny our poorer brothers and sisters the chance to enjoy lifestyles replete with stuff.

It all adds up to a crying need for carniculture, among other energy-cheap technologies such as nuclear power(1), hydroponics, aquaculture, space-based solar power (and asteroid mining?? Some people think it’s feasible). Unfortunately, mass production of vat-grown beef is still a ways away. That in vitro burger cooked up in London cost $330,000 from petri dish to plate. Like any new technology, carniculture has still to undergo refinements that will deliver economies of scale.

That scientists should pursue it seems as obvious to me as the fact that they will. Science is like water flowing downhill: it goes where it can, without regard for what may be in the way. Sometimes that’s a good thing and sometimes it isn’t. Discrimination and discernment are necessary. Carniculture, though, seems like an unqualified Good Thing. Even the notoriously hard-to-please PETA approves!

So why is M.T. Anderson trying to put us off it?

That scene from Feed is meant to gross us out. Beef slabs the size of football fields! Beef that doesn’t come from a cow! Oh, yuck! We’re expected to recoil in disgust and shake our heads at man’s estrangement from nature. And I did, like the good little late-imperial American I am. A few minutes on I came to my senses. This is just our old friend, nostalgie de la boue, back again in sfnal clothing. M.T. Anderson is taking his place in a long tradition of science fiction writers who pretend to write about the future in order to criticise the present. Books like Feed don’t actually tell us anything about the future except that the writer in question has not thought very hard about it.

We should anticipate the future with joy. How can you work to influence something for the better if you’re afraid of it? And if that means looking forward to vat-grown steaks, I do. Beef country, here we come!

1. Yes, I am saying this as someone who experienced the Fukushima Dai-Ichi meltdown at close range. It was terrifying and I am still seething with outrage at the moronic blunderers who allowed it to happen and still have not bloody well cleaned up after themselves. But we aren’t glowing in the dark yet, and really? Read George Monbiot on How the Fukushima disaster taught me to stop worrying and embrace nuclear power.