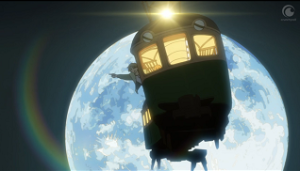 The Eccentric Family #12 – Yashirō’s sudden inspiration to provide Yajirō with liquid courage begins a chain of events which ultimately leads to a frantic hurtle down an ersatz Teramachi shopping arcade, the Ebisugawa brothers having to swim home, and the Fake Eizan Electric Railway embedded in the upper floor of one of the swankiest restaurants in Kyoto due to an ill-calibrated gust of magical wind. And that was approximately the halfway point.

Yes, The Eccentric Family is definitely living up to its name this week, and it’s a joy to watch all the carefully laid-out pieces coming together to form a comeuppance for Sōun Ebisugawa. It’s here that you can really see this is based on a novel. There’s hardly been a single moment that hasn’t been setting up for this final showdown.

There’s still one piece that doesn’t quite fit, though: Benten. She said back at the beginning that if people want a fight, she likes to see that they get it. The Shimogamos and Ebisugawas finally have their fight, but what does she want that (as she claimed to Yasaburō last week) she still hasn’t gotten? 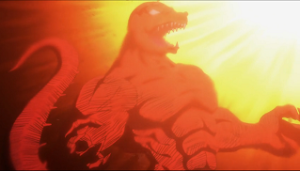 Hunter x Hunter #97 – You get the feeling that Yoshihiro Togashi got kind of tired of making sure Gon’s path was full of carefully calibrated enemies and just wanted to show some all-out stomping for a change. And then you realize that no, Togashi always has a reason for including things, even if the payoff is a long way down the road.

Gon’s due for a rematch against the Phantom Troupe someday, but it looks like that’ll be a very, very long way down that road, if they can take on Nen-using Chimera Ants that easily. 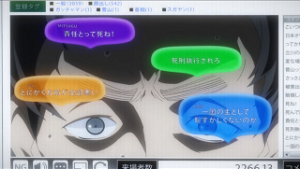 Gatchaman Crowds #11 – The Prime Minister has been hauled off to a secret lair, where he is given a prepared statement to read to the public, and… wait, these are the good guys, right?

Much like the main character, this series has its moments when you think it’s gone completely insane, only to then find that it does have a plan, if you will just trust it. Is everything going to wind up with one big fuzzy ball of online love started by the Prime Minister developing a spine and going out to rally the troops? Ah, no, it’s a way to dramatize that the Internet enables evil as well as good.

Now, what gun is left hanging on the wall for Hajime to stop the new wave of Crowds with? Hmm, does anyone know what MESS-chan is up to right now?

Boo for turning half of the episode into a recap. With only twelve episodes to work with, this shouldn’t be necessary. If next time feels rushed, we’ll all know what to blame. 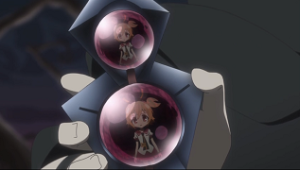 Day Break Illusion #12 – Now, compare and contrast the above attitudes toward setup to what Day Break Illusion does this week: Here’s a really important artifact you’ve never heard of, thrown in to torture the heroine some more! Here’s another one with no explained origin, which can apparently arbitrarily raise the dead or something! Wouldn’t that have been useful before? Were there reasons they couldn’t use it, other than the mysterious voice felt like hoarding it?

Now Akari is threatened with either statutory rape, because, um, well, Cerebrum must have a plan where this makes sense, and it would really help if it were explained to the viewer, or endlessly repeating the day she (or maybe her mother’s ghost) killed Fuyuna. Actually, didn’t we see her repeat that day once already? Has she been trapped inside the artifact all this time? Is this going to end with an it-was-all-a-dream dodge? Does anyone care at this point?