In this week’s viewing: The Eccentric Family lays bare a dastardly plot, Gatchaman Crowds creeps out its local viewers, and more! 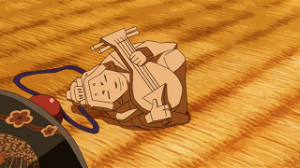 The Eccentric Family #10 – Well, Yaichirō did say he was looking for a way to follow in his father’s footsteps…

And so, Sōun Ebisugawa is revealed as the mastermind behind everything. He somehow learned of Sōichirō’s weakness around Benten (or is it Benten’s power to suppress tanuki abilities?) and made a win-win arrangement: his rival out of the way, and her entry into Kyoto’s most elite club.

There still some questions that need answering: Why did Sōun deliberately bring Kaisei along (ironically in the form of the goddess Benten) to witness what happened? When did Benten start hanging out with Professor Akadama’s antagonists, the Kurama tengu? How did a spot in the Friday Fellows “suddenly” open up?

It’s all up to Yasaburō now, unless of course Yajirō can be inspired to regain his powers of transformation by the knowledge that it wasn’t his fault and the love of his life is now in danger. 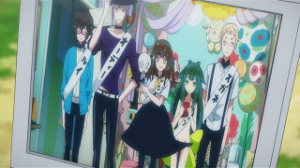 Gatchaman Crowds #9 – While Umeda and his thousands of Neo Hundred attempt to quite literally topple the government, Hajime clearly feels the priority is in persuading noncombatants to accept Gatchaman. Or is that to reject GALAX? It seems like this is building toward a moment when Hajime can tell the general public, “Don’t trust X next time it invites you to play a game.” But on the other hand, she seems to think that X is a problem that will take care of itself eventually.

In Umeda’s strategy, Gatchaman Crowds is playing off real-life events again. Kasumigaseki is, as you will have picked up from context, an area hosting a lot of govenment buildings, mostly associated with Cabinet departments. It’s a byword for the executive branch. In contrast, the legislative branch is associated with an area called Nagatachō.

Now, many of you will recall hearing that a cult called Aum Shinrikyo attacked the Tokyo subway system with sarin gas in 1995. They targeted trains heading for the stations at… Kasumigaseki and Nagatachō. 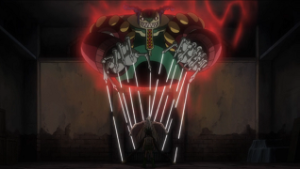 Hunter x Hunter #95 – Legend has it that Yoshihiro Togashi planned for Hunter x Hunter to have five big story arcs, and this whole Chimera Ant business was not one of them. It was supposed to be a brief side trip before getting down to serious business of the next act.

How did it wind up being the longest arc of them all so far? Well, maybe things just looked less complicated during the outline. Or, maybe it was something to do with the huge explosion of Chimera Ant characters. Or, going by the next-episode preview, that the villains from two story arcs ago just can’t ever manage to stay out of the story for long.

As long as it’s been going on, Gon’s been developing in a darker and darker direction. A while back, he had to face his first fight where he was forced to kill or be killed, and now he’s angry enough to kill someone in a fight he chooses. 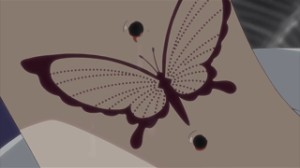 Day Break Illusion #10 – I guess this is planned to be a single-season series, the way it’s frantically hurling characters out the windows now. That’s Seira, Priscilla, Meltina, and their base with its nifty steampunk teleporter all taken out of action in one episode.

It was a nice touch a few episodes back to have the townspeople actually noticing that a lot of weird stuff was going on, unlike your typical sf urban population which never does. Now you can see that that was dropped in so that later the Daemonia could marshal an army of torch-wielding locals (what, no pitchforks?). “When in doubt, burn a large building to the ground” seems to be this writer’s motto.

So the survivors are off through the woods, presumably heading to Akari’s mentors’ house, where Mama Nagataki will deliver some handy words of wisdom before Akari has to confront Cerebran directly and comes up with her grand solution.

We are a Starfaring Species

Tahínus Requiem is a philosophical science fiction novel that should not be missed.