In this week’s viewing: Talentless Nana gets trapped by zombies, Jujutsu Kaisen has a lesson on pocket dimensions, and more! 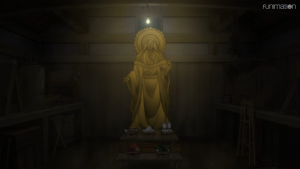 Higurashi: When They Cry – GOU #7 – Breaking into the shed reveals an altar to Oyashiro surrounded by a whole lot of distinctly non-religious-looking implements. This gives Tarano the hook she needs to tell the creepy legend behind the village. And though everyone seemingly gets away with their little expedition, Keiichi slowly realizes what a huge mistake he has made.

We learn that some of the villagers’ ancestors were allegedly oni who ate human flesh. That and the tools in the shed fill in just what Rena was up to when she said she was carrying out Oyashiro’s curse at the end of the previous arc (as well as adding an extra layer of squick to the fact that she concealed the tools in a stack of bento boxes). This also has worrying implications around the Sonozaki family, who basically run the town, and who (Shion said last episode) have a long association with Oyashiro’s temple.

All that business about “well, you did this willingly last time” turns out not to be directly volunteering for a sacrifice, but it seems that Tarano and Shion both understood that anyone not associated with the temple finding out what was in the shed would be seen as daring Oyashiro’s curse to come and get them. Tarano and Tomitake paid the price fairly quickly; what will happen to Keiichi?

And topping off the horror is the voice of Rika, the version of her who has been through this loop countless times, telling him it doesn’t matter. He may get brutally murdered, sacrificed, or disappeared; he may be spared; either way, he has already screwed up in such a fundamental way that doom is coming for the entire timeline. Now we can only wait and see what form it takes. 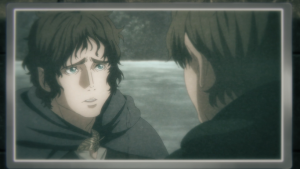 Jujutsu Kaisen #7 – Yūji is suddenly called away from training his emotional control with the Peter Jackson Lord of the Rings movies to get dropped right into a real-life Mount Doom. Because, he quickly learns, a curse spirit has ambushed Gojō, and Gojō has decided to make this educational for as many people as possible.

That includes the viewers, so that we can understand what’s going on in later fights where Yūji and his classmates will be in actual danger. Magicking up their own dimensions to overwhelm their opponents will probably be beyond them for a while, so that leaves them with the option of expending their own energy for as long as possible to survive. Or just popping out of the opponent’s domain entirely, which Gojō says almost never happens, so by the conventions of shōnen tropes it is now required to happen by the end of the season.

This also serves as a quick demonstration of what Gojō is capable of. Another fine shōnen tradition is coming up with ludicrous-sounding power concepts and turning them up to 11, and I have to say that weaponizing Zeno’s Paradox is one of the more outstanding examples of this that I have ever seen. 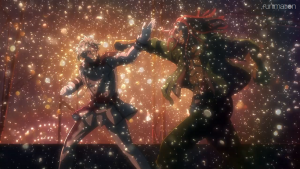 Akudama Drive #6 – All the remaining Akudama combined turn out to be just enough to wear down one experienced Executioner to the point where they can escape. Except one person doesn’t want to escape; the Brawler wants to meet his destiny taking down his archenemy in a set-piece battle.

That didn’t advance the plot much, but it sure looked cool while not doing it. It’s a fitting send-off for the Brawler, who goes out doing what he loves. And it finally provides a little character depth for the Hoodlum, who has developed a bit of a man-crush on the Brawler and is understandably upset about his death.

What happens after the Hoodlum rushes the Pupil is the biggest mystery in this episode. The Pupil has recovered her lightsaber at the cost of her eye, suggesting she defeated the Hoodlum, but he’s alive and well in the preview for the next episode. Is this a sign that he’s a double agent, or did he just escape through some bizarre fluke? 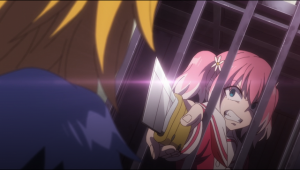 Talentless Nana #7 – Nana is forced to face the terrible history of the island in a very literal sense when she flees from Yūka and discovers that there is no practical limit on the number of dead people Yūka can control. Luckily, Yūka is limited by daylight and her own gullibility.

Once again, Talentless Nana proves that it doesn’t matter how powerful someone is as long as you can make use of their mental blind spots. A whole army of minions isn’t any help to Yūka when she doesn’t bother to look closely enough at what Nana was doing with the cottage door.

In the process of defeating Yūka, Nana reveals a little more of what’s motivating her. She’s fighting to keep the Talented dominating the Talentless, and her own self-esteem depends in part on not being in someone else’s power. But she’s surprised to discover just how many Talented have been murdered on the island. Do superpowers pop up more often than people think, or have they just been around longer than Nana’s masters want to admit? 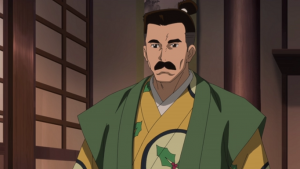 Yashahime: Princess Half-Demon #7 – The Four Perils conspire against our heroines, and one of them is able to catch Tōwa unawares and frame her. There follows her interview with a local lord, her rescue, and the unmasking of another of the Four Perils, as seen in the premiere.

Kirinmaru doesn’t seem to be terribly interested in the half-demon princesses himself. Or much of anything going on, really, as he even has to be reminded who one of his most powerful servants is. (Unless that was just some exceptionally clunky As-You-Know-Bob dialogue.) But the servants acting on their own seem like enough of a challenge for the next few episodes. Plus they have more of the Rainbow Pearls, which look like some obvious plot coupons to collect before moving to the next stage of the battle.

Tōwa’s captor, Ōgigayatsu Hīragi, may or may not be an actual historical figure. But the Ōgigayatsu family did exist, as a branch of the Uesugi clan, which controlled central Kanto at the time. Evidence for their resemblance to Freddie Mercury is sketchier.