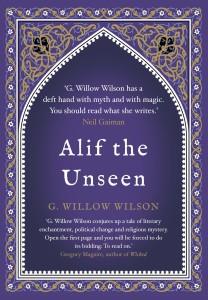 Alif the Unseen is a book about language, subversion, and the Arab Spring. It’s a good read, and a fast one. For this week’s Characters article, I’d like to talk about the title character. A brash, ill-tempered, love sick loser, who becomes a hero, Alif may not break the mold, but he’s pretty interesting.

I’d like to start by mentioning the setting. Alif the Unseen takes place in an unnamed Middle Eastern country. There’s a certain amount of culture shock. However, as we see this world through Alif’s eyes, we see it as a familiar place. Alif may not be the most religious Muslim out there, but he does take certain tenants of Islam seriously. He doesn’t sleep with his girlfriend until they both sign a marriage license. It’s an interesting juxtaposition to the general apathy westernerns tend to feel towards religion. (I’m not saying all westerners feel this way.)

Alif himself is a computer hacker. He hates the State, which he views as corrupt and oppressive. The interesting thing about Alif is that he doesn’t really have a side. He hacks and protects whoever pays him, whether they be Communists, Anarchists, or Islamists. I shouldn’t have to tell you that those groups don’t get along.

While he does actively oppose the State, he’s more of a Weekend Warrior than anything else. He doesn’t do anything to incite a rebellion, or sabotage the State directly. He sort of just keeps up with his daily life, and complains about how hard it is to be him.

He’s also quite short with his family and few friends. His girlfriend, who had broken up with him prior to the start of the book, doesn’t want to speak to him anymore, and his response is to completely wig out and build a hypothetical computer program to identify an individual based on their computer activity.

So yeah, he doesn’t start out as the most likable guy.

All that changes when he’s thrust into a world of magical creatures, State security agents, long lost cities, and mysterious books. Like I said, it’s a fun adventure.

He doesn’t change immediately, however. Alif continues to lament his situation and how completely screwed he is. Who wouldn’t?

The worst, of course, happens, and Alif is kidnapped by State security and taken to a prison at an undisclosed location for interogation, torture, and execution. There he meets the Hand of God, the hacker’s slang for the man behind the State’s online security. It’s a man who isn’t all that different from himself. The Hand doesn’t like the State anymore than Alif does, but he works for them because it allows him access to technology and resources he wouldn’t otherwise have. He’s a hacker in the State’s employ, and though Alif denies their similarities, you can see just how much the two have in common.

Alif is broken down in prison, but when the opportunity comes and he escapes, he becomes changed. He’s no longer the directionless boy who got thrown into the dark pit. He’s a man with a plan and a goal.

Through his actions, he inspires a riot in line with the rest of the Arab Spring. There’s a pretty major confrontation, not to mention a whole bunch of demons and djinn. On the whole, it’s a pretty impressive book.

Alif’s story is yet another coming of age tale. He begins a boy and ends a man. He’s taken away from all he’s ever known, he has his perception of the world destroyed, and is emotionally and physically tortured in a dark, forgotten place. When he comes back, he’s born again, with a new sense of purpose and a new maturity that was much appreciated by this reader.

Check it out if you have the chance.