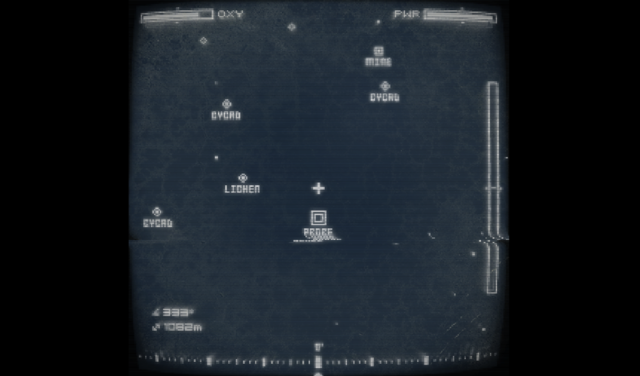 One thing videogames are quite good at is ambiguity. An ambiguous novel is hard to pull off at best, infuriating at worst: you need to be told what’s happening in order to imagine anything, and if you aren’t told enough you’ll think of everything wrong. Film operates the same way: we want representations of things.

Videogames, however, have long worked in abstraction. The first videogames were abstractions of tennis. Then, we got Pac-Man, where a…pac-man ran away from ghosts that kind of looked like squids? Anyway, videogames grew up providing us with inaccurate representations of the world around us, and they’ve never quite stopped: even the best games trade in inaccuracies, forcing you to draw your own conclusions from abstract realities.

Capsule, the newest PC game from Adam “Canabalt” Saltsman and Robin Arnott, builds itself out of abstractions. It provides you with incredibly little knowledge—even where you are isn’t immediately evident—and asks you to accomplish nebulous goals. This could be incredibly frustrating, but Capsule manages to be an enthralling, claustrophobic experience as you explore a terrifying, opaque reality, your resources constantly dwindling.

What you’re doing at Capsule’s beginning isn’t immediately evident. First, you’ve bought the game from a website that looks conspicuously like its been hacked, which provides literally no information. Then, Capsule plops you into its world, a vast black expanse with white icons. You’re a plus sign? Okay.

Press a button, though, and the plus sign will radiate a scanning pulse—you know its a scanning pulse, because it looks like one: the tell-tale ripple of science fiction radar—and suddenly there will be names above the symbols. Some will be ion vents. Others will be air pockets. Still more will be lichen.

Then you notice the two bars at the top of the screen: one for power, the other for oxygen. Maybe you’ve even heard the signs, a shallow breathing or a panicked beeping. Capsule demands you keep both of these meters filled to continue your journey. Run out of air, and it’s over immediately. Run out of power, and your ship’s dead. Considering you need to hit air pockets to not suffocate, and you can’t move over to them, running out of power might as well kill you, too.

To say more about your surroundings would ruin a lot of Capsule’s fun. But it’s the exploration’s tension, between running out of air and running out of power, that makes it such an intense, fun experience. You never feel truly safe in Capsule: you’re always aware that your ship is slowly dying. Everything is always falling apart.

It with just these two meters—and some incredibly real sound design—that Capsule creates its story. Whether or not it has its own is immaterial: you’ll find strange wonders as you explore the depths of Capsule’s blackness, but these aren’t the draw. The draw is the deep despair of the depths, the stark minimalism of the design. Too many videogames scream for your attention: Capsule knows that if you play it, it will have yours.

When I started writing for Amazing Stories, I gave myself something of a mission statement. Big-budget videogames—the kind you’ve heard of—tend to be summer blockbuster tentpoles, the kind of science fiction I’m not super fond of. I like smaller, more intimate experiences, ones that push at my expectations. And videogames have so many different takes to offer. Science fiction in a videogame can mean something like the bombastic Mass Effect, but it can also be the quiet, intense exploration of Capsule, or the utterly alien worlds of Starseed Pilgrim, or the dark depths of Howling Dogs. These are videogames that don’t try to scream tropes you’ve gleaned from years as readers and watchers at you, but instead try to do their own thing, to tell their own stories inspired by the same well science fiction’s been drawing from for years.

Frankly, I think Capsule succeeds at this. It is a story you’ve never heard before, in a game you’ve never played anything like before, and that’s brilliant.