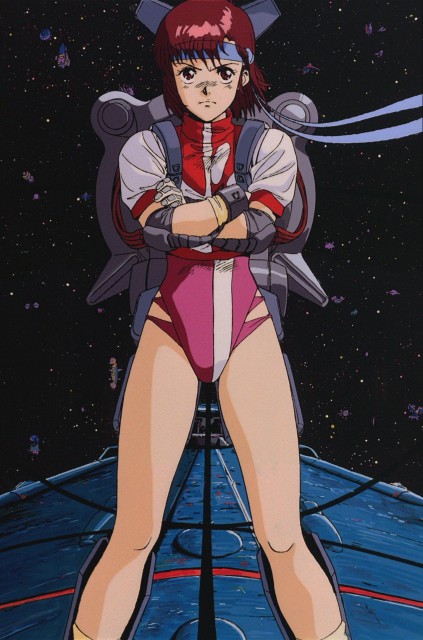 Studio Gainax veteran Hiroyuki Imaishi has been in the news lately for his upcoming project, Kill La Kill, which reminded me–I’ve been meaning to write a big fat recommendation post for the 1980s classic, Aim for the Top! Gunbuster.

Welcome to the big fat rec post for Gunbuster! WATCH GUNBUSTER. It’s short, first off—six episodes you can easily gulp down over the course of a lazy weekend. It has that luscious 1980s-anime look, with its fluffy hair and heavily-lashed, eternally-wet eyes—I suppose there are people that don’t consider this a point in its favor, though, so if you don’t, grit your teeth and consider it a history lesson. It’s funny and clever and tells a rousing story. It’s an interesting artifact from the early days of a now-celebrated studio. It’s well-animated. It has fun 1980s music. There are legwarmers and high-cut leotards.

But the thing that makes me love it is how innovatively it plays with classic shonen tropes. Gunbuster takes place in a world where humans use giant robots to battle a  tide of “space monsters,” insectoid creatures thirsty for destruction. Naturally, daring young pilots rise to this challenge with howled declarations of passion and hot-bloodedness. There are training sequences, brutal battles and grizzled old veterans stressing the importance of “HARD WORK AND GUTS!” There is fanservice and synthy music. There are attack names shouted in the heat of battle.

And–the protagonists are women! Gunbuster is a futuristic, giant robot shonen show….with female protagonists. Noriko Takaya is the eager rookie, raring to scrawl her name in space monster blood across the universe. Kazumi Amano is a poised, elegant valedictorian whom Noriko idolizes. Naturally, they form a mentor-student, and later, big-sister-little-sister bond as they join the fight against their monstrous foes. They sweat and bleed and cry into the dirt through academy training, sacrifice love for duty, and smash their enemies to pieces in what amount to the platonic ideal of giant robot battles. Towards the end of the series, Noriko (for reasons I won’t explain due to spoilers) rips off half her shirt, exposing one breast, and it is one of the most badass, teeth-clenched, who-the-hell-do-you-think-I-am scenes I’ve ever seen. It is shonen as hell. And it’s fronted by women!

But even beyond that (and that would be enough for me), Gunbuster experiments with the genre. In a surprisingly prominent subplot, our heroines cope with the fact that a few weeks or months in space amounts to years passed on earth. This gives the whole enterprise a note of melancholy, and the girls struggle mightily with the disconnect through all six episodes Moreover, it is suggested at one point that perhaps the space monsters, who possess no clear motivation, are a sort of white blood cell race that protect the universe from galactic cancers like humanity. Though that message seems at odds with every other aspect of the show, the ending hints that might, in fact, be the case. “Does mankind have the right to do something like that?” Kazumi muses sadly, “To kill the galaxy?” No answer is given.

So let’s review. Gunbuster is a fun, emotional shonen anime about giant robots and perseverance and beating the hell out of the bad guys. It is led by women who get fist-pumpingly awesome moments of triumph and grit. It is also a meditation of the nature of humanity and, if taken a certain way, a subtle deconstruction of everything the first five episodes—and giant robot anime in general—stand for. There’s also a Soviet redhead named, in true Gainax fashion, Jung Freud. There you go. Go watch Gunbuster.

(Ed. Note:  You can watch Gunbuster online – free – here and on several other sites)

Weeaboos of the Renaissance

Anime never rests, so get ready for a new serving of shows coming soon!