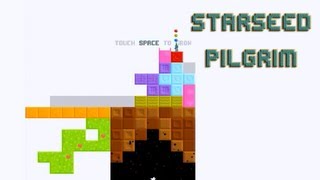 Explaining Starseed Pilgrim, an Independent Games Festival winner about building a garden in space, is both incredibly easy and nightmarishly complex.  At its heart, you float around on flying gardens, plant seeds that produce pleasant sounds and blocks, and explore about a floating universe.

But it’s harder than that.  Starseed Pilgrim starts you off with a lot of seeds and nowhere to go.  It doesn’t give you direction beyond how to remove blocks produced by the seeds you plant; it doesn’t even tell you how to plant them.  Starseed Pilgrim doesn’t tell you anything.

Many of us—those who grew up on video games from the 80’s and 90’s—look at this and think it refreshing.  Not being told what to do, and how to do it, is something we grew up with.  It’s a natural state of being.

But for others—people whose gaming experience doesn’t stray from Call of Duty and Angry Birds—Starseed Pilgrim might sound miserable.  As humans, we tend to like to know what we’re doing.  We don’t want to be abandoned; we want someone to tell us how to survive.

What Starseed Pilgrim creates, though, is an place for experimentation.  More even than genre standbys like Mass Effect, it feels like a science fiction game: what it lacks in the expansive trappings of the genre it makes up for by placing you in the role of a scientist.  It’s always teaching, and you’re always learning.

In short, what makes Starseed Pilgrim so wonderfully consuming is how much you’ll learn about it.  It might take a few minutes to figure out how things work, but these feel like the first few steps into a completely new universe rather than a game trying to alienate you.  There’s a joy of discovery here, a feeling that anything is possible as long as you suss it out. 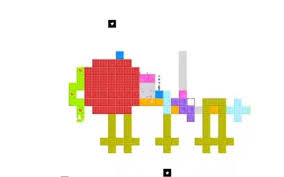 It’s kind of a distillation of the feeling of playing Minecraft for the first time, before you decide to throw rules to the wind and make something like this blocky recreation of Westeros.  The first hours of Minecraft are filled with scrambling, of figure out how to build yourself shelter, how to acquire better gear and better weapons, how to save yourself from the hostile world around you.  And all the while you’re learning, you’re discovering.  You’re figuring out how to build more intricate things, how to deal with increasingly stiff challenges.

I’m smitten with this little game, with my own little garden in space.  It’s got a charming fantasy to it, but at heart it’s a game about learning, about its mechanics.  It’s a game that makes you feel like a botanist, like you’re someone learning about a strange, new place for the first time the same way a lot of my favorite fantasy and science fiction strikes me.  More than wearing its genre on its sleeve, it’s letting me live the life of some of my favorite characters.

5 Books that Give Voice to Artificial Intelligence | Tor.com