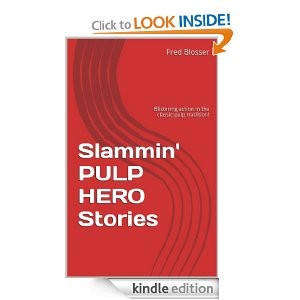 There’s a new book out I’d like to recommend to anyone who’s a fan of pulp fiction– or anyone who just appreciates good writing. My friend Fred Blosser, known in some parts as an authority on Robert E. Howard, among other things, has published SLAMMIN’ PULP HERO STORIES, a collection of fiction he’s written over the years, as well as some brand new stories.

Fred, who has written numerous essays on Conan the Barbarian, and even been assigned the task of finishing some of Robert E. Howard’s uncompleted stories for various publishers, has finally decided to come out of the woodwork with some of his own original material. It’s long overdue.

“Blistering Action in the Classic Pulp Tradition,” it says on the cover of this collection. And it’s no lie. The stories are a mixture of tales of gangsters, and Pinkerton agents working in coal towns in West Virginia, frontier tales set in the Carolinas, and even some tales featuring characters named Commander Manta and The Gila– the kind of characters you would have easily found in old pulp magazines like Black Mask, Amazing Stories, and Weird Tales.

The book also contains some essays on pulp writers like John D. MacDonald and Lester Dent.

I highly recommend the book, written by the man who taught me most of what I know about genre fiction. Not all, but most. It’s available currently as an e-book from Amazon.com and may come out later as a paperback.