One of the things that you give up with traditional publishing is decisions on things such as price, cover design, and formats that the book will be produced in. I’m starting to see more and more trends toward big publishers doing “digital only” releases, so if print is important to you, make sure your contract clearly states that print isn’t just an option but a requirement.  Also, I make sure that my contracts indicate simultaneous releases for print and ebooks.

When you sign, you’ll generally have no idea which format the print books will be produced in.  In general there are three choices:

As you’ll see, the sales curve for these three types of releases look much different from one another. I’ve taken the data for these comparisons from Neilsen’s Bookscan, which reports on consumer sales (rather than shipments from warehouses which indicate books still in stock or on the book store’s shelves).  Nielsen is the defacto standard for judging a book’s performance and what many publishers look at when purchasing a book by a previously published author. It doesn’t represent 100% of the sales (as not all outlets collect/report data for Nielsen) but in general the numbers represent 65% – 75% of sales.  I’ve checked Bookscan data against my own sales and find they are right around 63% – 65%.  Also keep in mind this data is ONLY for print books, as Nielsen doesn’t collect or report on ebook sales…yet. 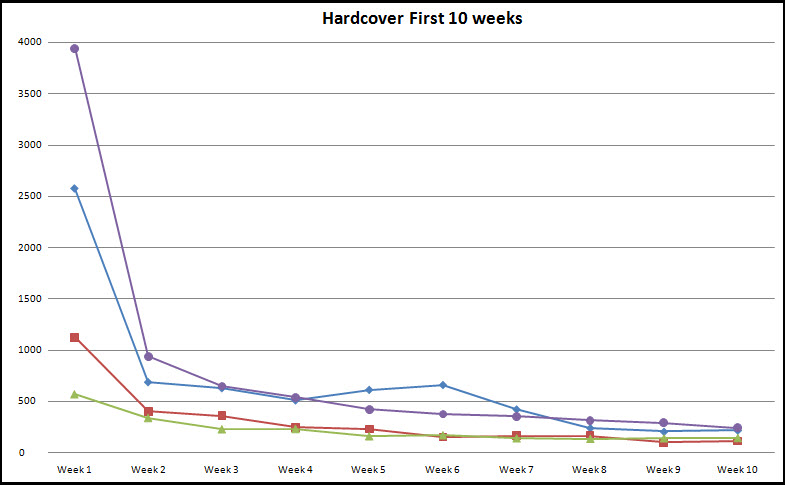 All of the books above are fantasy titles.  And they all follow the same trend. Really large first-week sales with a dramatic drop off in the second week.  By the end of the tenth week all books are selling in the same general range (150 – 250) regardless of how steep their first week’s sales are.  The high peak in the first week indicates a significant amount of “pre-release” hype and a steady flow of pre-orders before release day. Here’s a bit more about each book: 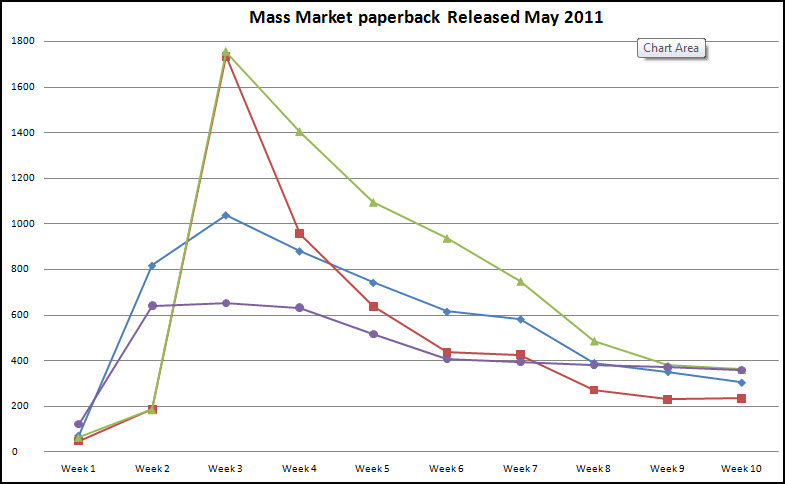 For this graph I chose books that were initially released as mmpb. (Sales would be different for books that had previously been released through hard covers).  I also chose books with similar release dates (May 2011) so that seasonal sales didn’t come into play. Notice that the first week sales were always modest (50 – 125 copies) and in general the third week was their “big selling week.” My take on this is that these books did not get much in the way of promotion from the publishers, and it was the author’s own efforts (and word of mouth from earlier readers) that built the sales in the subsequent weeks. The decay rates are not quite as consistent as they are for hardcover books and probably  indicate how well received the book was received. But eventually they all settle down and again, at the 10 week mark all books were selling relatively the same (250-350). Notice that this level is higher than the hardcover books (again because of the difference in price). 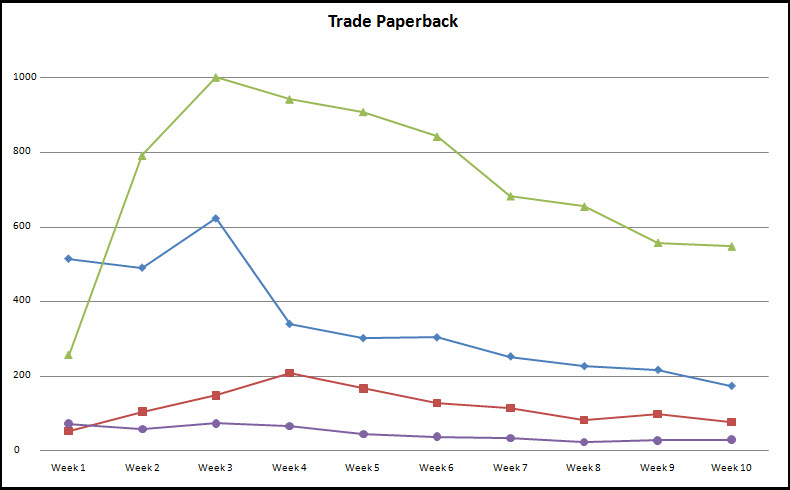 Trade paperbacks show the most deviation in their sales profiles, and at the end of the 10 weeks have a wider range of sales levels. If we took these graphs out further, you’d see that trade paperbacks generally have more consistent sales over a longer period of time.  Some further notes about the graphs above.  Both the green and blue lines were from debut authors who have multiple books in a series. All their subsequent books have sold well and they are good “solid” midlist authors. The red line is from a debut author who would be considered an “under performer.” Top weekly sales were 209 and after 12 weeks the sales fell to 50 or below.  Over the last year, weekly sales have generally been in the single digits.  The purple line is from a well-established author with good name recognition. The book had good pre-release “buzz” and was nominated for awards but for whatever reason it never “caught on” with the reading public. It just seems to continue to “plod” along with a few sales week after week. With under 1,000 sales after more than a year on sale, it also would be considered an “under performer.”

So which should you hope for? Well it’s hard to say. Each one can have pros and cons.  Take someone like Brent Weeks. He was initially released in mass market paperbacks and they sold so well that he developed a huge following and hit the New York Times. He now releases first in hardcover and would be considered an “A-list” author. If he were originally released in hardcover at a higher price, its possible that he wouldn’t have been able to build such a large audience so quickly.

Peter V. Brett is an excellent example of a successfully launched hardcover author. His first book did well in hardcover but he really gained momentum with the mass market release.  When the second book came out in hardcover, it sold twice as much as the first as those legions of mass market buyers bought the hardcover as soon as it was available.  His third hardcover came out even stronger which shows a continued growth that has moved him into “A-list” status.

Trade paperback is kind of the “middle ground” I consider it the place for “solid” midlist authors. Books in trade paperback have “longer-legs” meaning their week-over-week sales remain relatively high and don’t suffer nearly as badly as the other two formats as far as fall off from a large peak. I consider myself a pretty good trade paperback midlist author.  I’ve never had a huge single month that would get me on a bestseller list, but even a year and half after my books were released they are still widely stocked in bookstores and sell several thousand each month. Unlike many of my midlist counterparts, I earn a good living from my writing and don’t need to supplement with a day job.

So there you have it.  A little peek into the various sales profiles for different formats. Once again, you generally won’t know what route your publisher will choose prior to release, but once the format is determined you should be able to have a bit better idea of what to expect.