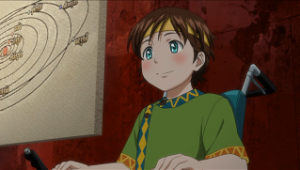 Gargantia on the Verdurous Planet, end – By golly, they managed it. The big fight scene and enough time left over to wrap up all the loose ends, including what Earth was doing as one big ocean. Everyone, finally, from cultists to pirate queen, getting together to work in the same direction. Heck, even talk of being someday able to communicate with the squid people. It’s like watching the original Star Trek. You hardly get happy endings like that in Western sf anymore.

It was gorgeous, uplifiting, and hit the sensawunda nerve bigtime. If this series had only been 12 episodes long, I would be agitating for it to be on everyone’s Hugo ballots. 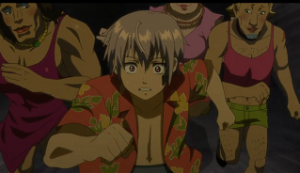 Yeah. Episode 5. The one where everyone’s IQ is slashed in half and the girls all have to parade around in bathing suits. And then they top it off with a failed attempt at humor as Ledo runs for his life from amorous gay men who want to shanghai him into their drag cabaret.

This would have been a perfectly good show without that episode. It contributed nothing to the story except the giant sprinkler which would eventually turn out to be something else, and there was nothing about that that required a parade of stupidity and harrassment to introduce it.

If that episode had been nothing but an excuse for a bunch of fanservice, I might still be able to scrape together a recommendation for Gargantia, and tell people to just skip that one. Hey, no show is completely perfect. Every one that I love, I have to admit there is at least one moment when it was not at the top of its game.

No. There is a point at which something can be so bad that it cancels out every good thing that surrounds it. Here it is. If I said this was overall a good show, knowing that that scene is in it, I would never be able to look any of my gay friends in the eye again.

It was off to such a good start before that, there was every reason to watch the rest of the series so that it had as much chance as possible to make up for that scene. Well, it failed. Because it’s not just that scene, it’s the fact that those are the only gay people we ever see in this show.

It’s even failed on its own terms. The inspiration for Gargantia was to present the young adults, especially the hikikomori, of Japan with a story of people like them being faced with challenges and successfully dealing with them. I don’t think it’s a coincidence that the name Ledo’s support system is a synonym for “room”. So what’s the message for young gay people here? “Other people have a world of possibilities awaiting them, but you will always be defined by your uncontrollable perverted lust”?

I don’t accuse the makers of this show of any particularly personal hatred of gay people. This is dead average for how gay people are represented in anime. (Even the one wholly positive portrayal of a gay person I’ve seen in sf anime was extraordinarily camp.) That doesn’t excuse it in any way. It’s still wrong, offensive, and totally unnecessary.

That’s the part that makes me angriest: that entire episode was unnecessary. But there it is. So no, avoid Gargantia. If your interest was piqued by the themes of the main character learning to question the eugenically-oriented society that raised him and human difficulty in accepting the humanity of other sentients, From the New World has all that, and the worst thing I can say about it is that it drags a bit early on. 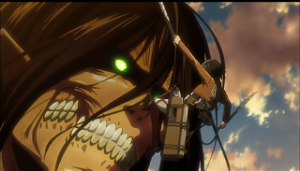 Attack on Titan #3-13 – As far as I know, this is still in too limited a release to qualify for this discussion column, but it deserves a good word as the season comes to a close. While it continues to be brutally violent– there’s someone being eaten alive in almost every episode– there are terrific action sequences and solid writing to go with it. I especially strongly recommend it to military sf fans, as that’s the genre this really belongs in. If you’re in one of the lucky few countries to be able to access the simulcast (US, UK, Canada, and Ireland), it’s worth a look. And if catching up on 13 episodes sounds daunting, #14 is going to be a recap of everything so far. 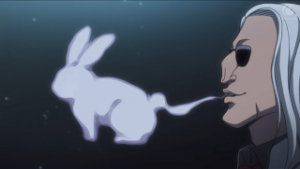 Hunter x Hunter #86 – Hunter x Hunter does not respect the rhythm of Japanese TV seasons, so it’s just another day at the office for this show. But it’s an episode that really showcases why I like the world of HxH so much.

Sure, it has the evil catgirl-ant who’s decided to take up necromancy just so she can bring her new favorite toy back to life. (Let’s admit it, fellow cat owners, our sweet furry darlings would totally do that if they could.) But it also contains a 57-year-old woman who can transform herself into a child and still kick just about anyone’s butt, and the bruiser who spends all day shouting at the top of his lungs that he’s spoiling for a fight but winds up taking care of a stray puppy, and Chairman Netero, and Gon and Killua, and moon rabbits made from pipe smoke. To come this far and yet still feel like there’s lots more to see is amazing. 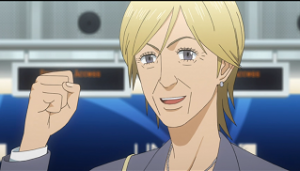 Space Brothers #64 – Wait, ALS? That’s the super-rare disease that practically no one has heard of?

Well, some quick online research says the prevalance is 5/100,000 in the US, somewhat lower overall in Japan, and Japanese cases tend to occur more in clusters. Throw in less societal openness regarding discussion of illness and death, and I guess it’s conceivable that Mutta could make it to the age of 33 without ever hearing about it.

The show is, at least, being realistic about the prognosis. Assuming that the medical profession of 2026 has made no great advances in this area since our time, Sharon has probably two to five years and no way of predicting whether she’ll be at the high or low end of that.

Boy, what a way to end the season. But Mutta and Serika both have even more reason to keep trying now.