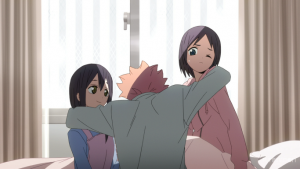 ID: Invaded #9 – After Sakaido dives into Asukai’s well, what he finds is not yet another world with bizarre rules, but one that feels perfectly ordinary. He can remember himself as Narihisago. Kaeru is alive and willing to explain things. What could the catch be?

In a way, this episode is the Mizuhanome getting to tell its own story. First it was connected to Asukai. Then John Walker trained his serial killers by bringing them into Asukai’s dreams. The end results of those dreams are what Narihisago, Fukuda, and Hondōmachi have entered to solve Kaeru’s many murders.

But this means that the contents of the wells already existed before anyone tracked down the serial killers! Which means that either the business with cognition particles is a complete sham, or what they’re really detecting is people who’ve had prior contact with the Mizuhanome.

There are two wells that don’t fit the pattern: Narihisago’s, where Kaeru died from a lightning strike, and Hondōmachi’s, where Kaeru killed herself. Supposedly neither of them had prior contact with the Mizuhanome (since Narihisago’s dates from three years ago). So either that’s incorrect, or there’s some additional factor yet to be explained.

Throwing a monkey wrench into everything, of course, is Mrs. Narihisago’s insistence that no world where she kills herself can be real. Which brings us back to the question, whose head has this all been happening inside? 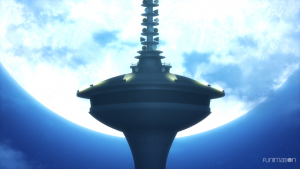 Magia Record: Puella Magi Madoka Magica Side Story #8 – Still searching for Ui, Iroha next hits a group of rumors about a radio tower, mysterious messages, a crying or laughing girl, and something called the Endless Solitude. Of course she decides to run off and investigate on her own, of course the Magius organization turns out to be involved, but of course her friends come through for her, too.

Late-night radio in Japan seems to be much like late-night radio anywhere, plus or minus the anime theme songs (way to get meta there), and the fact that this DJ seems to be incorporeal. What is really up with the radio tower and all its weeeeeeeird foreign religious symbols, though?

Speaking of the opening, you may have noticed that the last shot of Iroha with the umbrella has gone from just her to include Yui, Yachiyo, and Felicia. This is a very helpful guide to which characters out of the enormous ensemble cast we can expect to play a truly significant role in the story. But it also raises the possibility that if things get dark, we’ll start seeing them disappear. 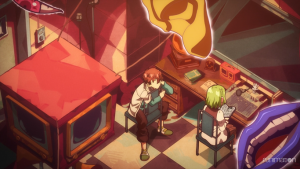 Toilet-Bound Hanako-kun #7 – Life settles down long enough for Kō to come up with an elaborate plot to apologize to Hanako while not admitting to it. Then the force that has been manipulating the school apparitions into new forms starts to show itself.

Our villains appear to be the mysterious girl broadcasting new rumors from the radio club room, the mysterious boy with the black paper cranes, and Hanako’s evil twin. Who might actually have been his real twin in life. (An untranslated honorific says that Hanako is the elder brother, but it could just mean he’s the elder twin.) And apparently that twin is the person Hanako killed with his razor blade.

But that just leads to more and more questions. Hanako’s brother does seem like a creep, but bad enough that Hanako would just up and murder him one day? How did Hanako himself die? How did this lead to Hanako taking up his post as a standard school haunt, and able to move around freely, but his brother being trapped in some other part of the school? And does this have anything to do with the other new ghost appearing this week, or is that just an unfortunate side effect of trying to squeeze several chapters of a manga into one episode? 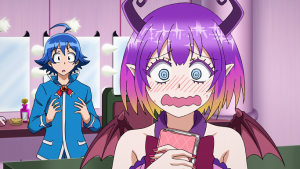 Welcome to Demon School! Iruma-kun #21 – Iruma learns about demon idol singers just as one of the biggest up-and-comers is about to perform nearby. Little does he know that accepting free tickets from the radio club will put him on an unexpected collision course with one of his own classmates.

While Iruma is a constant victim of convenient misunderstandings, it’s nice to see that he at least gets to figure it out when given completely unambiguous information to work with. It would be nice to further see if it can point out the inherent ridiculousness of the whole setup. The pop idol who has to maintain a double life as a seemingly ordinary high school student shows up a lot in anime, and the reasons for keeping her identity secret are rarely well-explained. Maybe he can suggest that the answer to Kuromu’s dilemma is to just… not hide it? 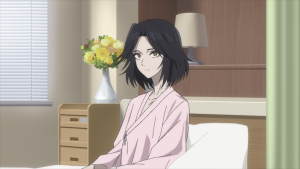 In/Spectre #7 – After the news breaks about Terada’s death, Kotoko, Kurō, and Saki realize that things have gotten real and time is running out. So they reassemble and talk. And talk. And talk. And, oh, by the way, Kotoko and Kurō turn out to have known who was behind this right from the beginning.

This show may be called In/Spectre, but it gets less and less like a detective story every week. Very little of the mystery has been cleared up by actual investigation, and just when things should be building to a climax they instead involve ever more sitting around and talking. Possibly soon there will be Internet posting!

By calling Kurō’s cousin the Mistress of Fiction, it sounds like Kurō and Kotoko have tangled with her before. How she came to be like that and how they first discovered the fact seems like it would be an interesting story, much more than this one. But for some reason the author would rather tell the story of Saki stumbling into a situation where practically everything has been figured out already. It’s starting to feel pointless.