Louisville, Kentucky has grown by leaps and bounds when it comes to conventions. Just a few years ago, the only Con I was aware of in the area was Wonderfest– a great model-making convention/flea market my oldest daughter has enjoyed attending year after year.

In recent years, Louisville has added two more science fiction/fantasy conventions to the line up: the Derby City Comic Con, and FandomFest. This past weekend, I took the whole family to Derby City and experienced several hours of sweaty, flea markety goodness. 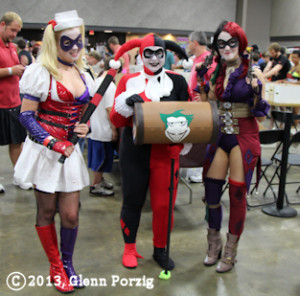 First off, Derby City earns my gratitude for their Groupon discount. Instead of buying four tickets to enter at full price ($10 each), we got a Groupon deal of two for the price of four. True, I later found out our 7 year old could have gotten in free, but still, I saved a little money- getting our family of four in for $20. That’s a great deal.

Secondly, I knew right off the bat(man) this wasn’t going to be the same Con it was in recent years. As we pulled into the parking garage, we observed Batman in full regalia on his way in. This was an omen of things to come- the Con was bursting with costumed visitors- from kids to grownups. This was great, since my 7 year old had decided she would wear her Supergirl costume leftover from Halloween. She was in good company, and was even asked for her picture a few times during the day.

In fact, instead of just letting Cosplayers wander around, Derby City asked them to do a parade around the entire vendor room. That too was a first for me. I didn’t have to stand shoulder-to-shoulder with strangers and watch a costume contest to see all the great outfits- they walked right by where I was patiently waiting. Again, my kids really enjoyed it. 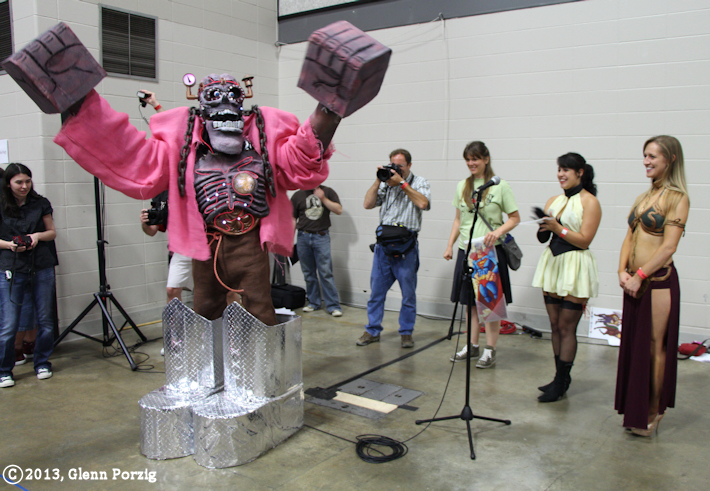 I also noted that there were more vendor tables present this year. A lot more. I had kind of figured that, since myself, and a couple of friends who tried to reserve tables in late 2012 were told that the tables for this year had sold out and we regretably wouldn’t be getting one. (although I did note they probably could squeezed a few more tables in along a back wall)

There were a lot of great tables set up though- posters, toys, comic books and even movies. And artists- lots of artists. Most of which I didn’t know who they were- I haven’t collected comics in years. The artists ranged from folks with DC & Marvel credits, to indie/small press comic companies, to small, family-run comics. A lot to choose from, and all of good quality. 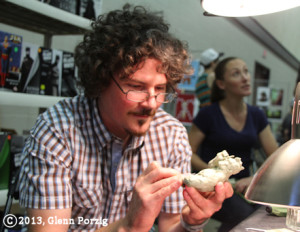 But, like anything you take your kids to, there’s bound to be some bad stuff. While I didn’t see any gigantic-bosomed, nearly-naked illustrations or sculptures like Wonderfest is filled with, I did notice there were several booths and comic displays that were not suitable for my kids. I really would have preferred that all the tables like that be put in one aisle, designated a PG-13 aisle, maybe, instead of being intermixed with all the other stuff.

And there were the creepy fans. In particular, I enjoyed my wife’s reaction to two older gentlemen who watched a Slave Princess Leia cosplayer walk by and then remark “There’s a tasty treat.” This was my wife’s second time at a convention (her first was an earlier Derby City) and that little gem might have made it her last. She was none too happy. Guys, if you have to admire the gals, have the good sense to take note who’s standing around when you voice your admiration. 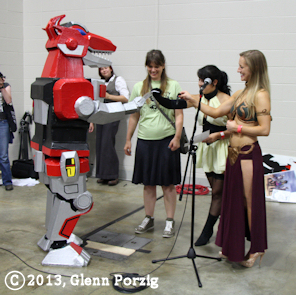 And for a Convention that clearly made an effort to include some kid-friendliness, they were missing a few vital features. Like chairs. Derby City was in the Kentucky Convention Center. I know for a fact there are chairs there- I’ve been to other events with them. So why not set up some chairs on the outer walls, so tired little feet can rest? My littlest one made it about two-thirds of the way through before she had to take a break- sitting on my snack-filled backpack we set on the floor. The wife complained all the next day about all the walking we did- when she wasn’t griping about the “dirty old men”.

There also wasn’t much free stuff. I know that sounds like I’m cheap- which I am- but when you have a kids event, you need free stuff. Kids are more likely to spend their money when they start getting stuff. Plus, a lot of the stuff at the Con was out of the allowance price range. I let my girls go well over their spending limit, meaning I didn’t have cash left for some art for me (and I really was jonesing for a Doctor Doom print by the great Billy Tackett).

My suggestion for next year is to turn the Con into a trick or treat type event for kids. Ask vendors to bring some bags of candy to hand out to kids- in costume or not. The few free stickers my girls did get made their day, even after they purchased a plethora of Adventure Time and Doctor Who merchandise.

And that was kind of it. Maybe there were some events later, but it seemed, once again, to be nothing more than a big ole, indoor, comic book-themed flea market. Wonderfest has display rooms (I particularly like the Universal Monsters costume and toy display every year) and even a model building area. FandomFest and Wonderfest also supplement their flea market with presentations where you can hear folks speak on a variety of movie related topics. You get to sit down and rest, and listen to something interesting. 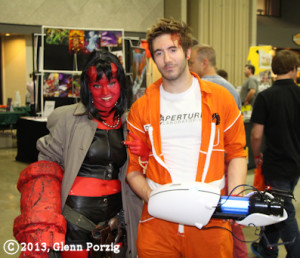 I realize that adding presentations and guest speakers might raise the price of admission, but it’d be a way to get folks to stay longer. With my kids in tow, I was there maybe three hours. If I’d have stayed longer, I might have taken a second stroll through the vendor area and broke out the plastic to get myself something. As it was, my feet were tired and I was all for taking the kids back to Indiana- with a stop for ice cream on the way.

All in all, Derby City is worth the half-price admission I paid and the hours of shopping. But if it was the same weekend as Wonderfest or Fandomfest, which are considerably higher priced, I wouldn’t think twice- I’d forget all about Derby City.

Get your ballots in!

Find out how to get some Amazing classic fiction