Hello folks! And welcome to my little spot on the interwebs. Thanks for joining me! April is National Poetry Month (in the USA). I wish it weren’t always in April. This is a very busy time of year for me as a singer (I usually sing concerts before and/or after Easter) and for my family. We travel at Easter, usually to another country (this time Italy) and now that my son is in pre-school we also have the usual school activities associated with Easter/Spring. ANYhoo, I’m off on a tangent. I merely wanted to say that I don’t have the time I’d like to dedicate to even more poetry. But here we are. I wanted to give you reviews of 3 collections, but time and space have limited me to two. But oh, these are fit to blow your mind! Mary Turzillo’s Stoker Award nominated “Lovers and Killers” and F. J. Bergmann’s chapbook “Out of the Black Forest”. Here we have two collections, which include many poems that derive a basis in Greek mythology, modern sciences and fairy tales. I woud dare say that one collection leans toward the scientific and the other towards the fantastic. 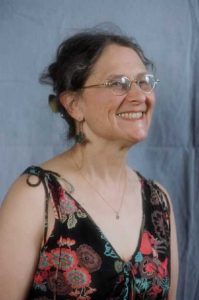 Mary Turzillo is a writer and poet whose work has repeatedly crossed my radar over the past year. Her poem “The Legend of the Emperor’s Space Suit (A Tale of Consensus Reality)” took third place in the long poem category of the 2012 Rhysling Awards. I podcasted it and the other 5 winning and placing poems. (You can listen to it here.) I’ve read much of her poetry that she’s had published this past year online and in print. She published a collection of reprints and original poetry in the volume Lovers and Killers. In addition to its being on the final ballot for the Bram Stoker Award for excellence in a poetry collection, one of the poems within (as well as two published “Galatea” – read here– and “Going Viral” – Star*Line) “Tohoku Tsunami” has been nominated for the 2013 Rhysling Award. Listen to Tohoku Tsunami below. Her novellet “Mars is No Place for Children” won a Nebula Award and it and her novel An Old-Fashioned Martian Girl are both recommended reading on the Internalional Space Station. As a side note: she is married to another of my favorite SF poets, Geoffrey A. Landis. The brilliance comes as a pair! 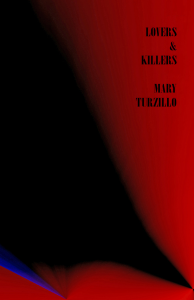 Lovers and Killers collects poetry from as far back as 1988, a poem which appeared in print and others as recent as December 2011 in online journals. However, two thirds of the poems appear for the first time in print. And we are all the richer for their publication.

Turzillo has a knack for taking something very familiar (weeds, cafés, bringing your wife roses, or Christmas letters )and turning them on their heads.

Gardeners all over the US celebrate tonight.

In other new, US Customs arrests a ten-year-old

for smuggling a dandelion in from France.

He opened a coffee shop on Coventry:

He’s observant to. Read you like a book, they say,

Those compound facets focused on you.

Doc says she may just have to live with the smell.

Our oldest is on dope again, cough medicine, they think.

You get the idea. I really like Mary Turzillo’s writing style. It’s less formal than many poets in her syntax and word choices, which makes it easy to read.  It’s a book that could be ripped through, it’s so easy to read, but it’s many-layered nature benefits from a bit more leisure. It often reads like a news flash (as in The Last Weed), so Paul Cook, you are forewarned. Turzillo draws you in by making you feel at home in the language, but the subject matter is what stretches your mind.

She takes familiar characters or stories, from everyday life (“The Bus”), Greek mythology (“Iphegenia in Shaker Heights” or “Bearded Kaliòpe”), Christianity (“Saint Theresa and the Fuck-Me Shoes”) modern science (“News Release: Corals and Humans Share Nerve Genes”) and popular culture (see again “Café”) and shines a special light on them or regards them from an irregular angle giving the familiar a twist that must be turned in your mind a few more times.

I’m the pretty one, Dad says,

so I get to go out and model my new

suit for the entire Aegean navy. for morale, Dad says.

Orry’s just a guy, what would he understand?

He says I look hot in my Spandex thong.

Not what I need to hear

from my own brother, thanks anyway.

Daddy’s annoyed the winds are down,

because they work fuck-me shoes

or bound their feet into scented rotten slugs

to arous their men with the smell and doll toes,

Here’s to the women burned on funeral pyres

or Saint Theresa sacrificed to her own virtue

because it was fuck that guy or die

and she decided to die.

–“Saint Theresa and the Fuck-Me Shoes“

Audio: “Stop to Kill the Roses” 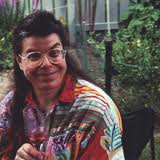 F. J. Bergmann is a woman who wears many literary hats. She is a poet and her poetry has won award after award. She edits Star*Line, the print journal of the Science Fiction Poetry Association (SFPA). She writes fiction. She is also an artist, graphic designer and web designer. She loves and may have worked with horses in a previous life iteration.

She recently sent me a review copy of her chapbook published in 2012 “Out of the Black Forest” by Centennial Press ($5 or $8 signed!). This is one gorgeous chapbook of new takes on (mostly) familiar fairy tales.The poems are evocative and make you think. The illustrations are spectacular and the graphics elegant. All in all this is one of the best itty bitty poetry collections I’ve had the pleasure of enjoying recently. 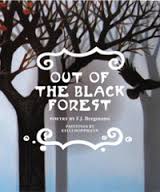 Most of the poems collected here have appeared or are forthcoming in various print anthologies, journals and only publications, but here they are all cozied up to one another. The titles of the 16 poems are one succinct word – Teeth, Fins, Coil, but the poems themselves lyrical and strange, much like the Grimm fairy tales many (all?) of them are woven around. They are not simple re-tellings but are derivations or variations on the theme. Often with a twist at the end which leaves you reeling and pondering. It’s not possible to turn the page to the next poem immediately. They often spin out in your mind for a while longer. The poems themselves are fairly short, so I can’t really quote from them, but I have the poet herself reading 2 of them for you. Have a listen and enjoy.

Thanks for sticking around! If you need to read more about SF/Speculative poetry here are a few links for you to follow to events in the ether: