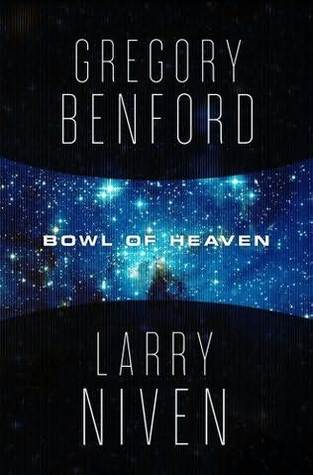 This is the first collaboration between two of our major writers, Gregory Benford and Larry Niven. Bowl of Heaven is about a human expedition in a ram-scoop ship to a nearby habitable world named Glory. About half way in the decades-long journey, Cliff Kammish is brought out of cold-sleep by a skeleton crew to find that the ship isn’t traveling fast enough–which is one of the many crises facing the crew.

The greater crisis–well, it’s not a crisis, really–is that the skeleton crew has discovered a strange object out ahead of them. It’s a half Dyson sphere with a flame coming out one end and a star racing out ahead of the “Cup”. This is the Bowl of Heaven. Picture Ringworld along the inner rim of a giant Cup whose circumference is the size of the orbit of Earth. Or Mercury. (The novel is not clear on this–and it is only one of the novel’s many ambiguities.) Whatever the Cup is, it’s huge. The inner basin of the Cup, below the habitable rim, is a giant mirror and it’s used to refocus energy on the star out ahead of it, using it as a form of propulsion through space. The earthly explorers, in order to get more resources (air, water, food), decide to land on this object and explore it, and thus we have our novel and I presume a sequel or sequals because the novel ends very inconclusively with the humans stranded on the rim of the Cup with all sorts of unpleasant aliens.

That is, if you get far enough in this novel to find this out. I barely made it.

The novel’s opening eighty pages are masterfully written (my guess is that Benford did the writing here–it has Benford’s hallmark attention to cultural detail and his patient feel for story-telling). But everything (about the writing and plotting) falls apart when the Cup is discovered by the skeleton crew and landed upon. Once the humans get into the Cup and into the structure itself, the novel loses all sense of scale, or I should say that the scale of the Cup is so vast that neither author seems able to convey its immensity or create the creatures who live there in a credible manner.

This is actually a Lost World novel in the tradition of Edgar Rice Burroughs. The formula is that the explorers encounter all kinds of marvels and creatures, and they get separated and go through various travails to the novel’s end–only to separate again. This isn’t a bad formula, but my main problem with Bowl of Heaven is that the writing–and the editing–as abysmal. As I said, the writing up to the landing in the Cup is excellent. From there on, Niven’s hand is all too apparent. Benford will take the time to describe some of the vastly tall structures along the Cup’s rim; Niven will simply say: “The structure was incredible!” Benford writes in long, elegant well-formed sentences; Niven in short, staccato exclamations (much as he did in The Integral Trees in 1984). Then, too, there are whole sections of action that either repeat themselves or sections where characters are in one place, when earlier they were in another and then back again. Parts of the novel are abstractly written; other parts are quite eloquent.

There are too many glitches to mention. The other disappointment is the lack of imagination in the aliens who inhabit the Bowl . The most important group are Bird Creatures. If you’ve read Poul Anderson, Gordon Dickson, or Andre Norton you’ll have read authors who’ve had bird-like aliens that are far better described than in this book. That was the first stunner, the laziness of the two imaginations at work here. The second was sheer scale of the Bowl, which sadly is beyond the talents of Niven and Benford. The Cup is so large that I had a hard time visualizing the humans on the Rim of the Cup. The land area would encompass billions of square miles, but the one thing it wouldn’t do is curve up. It would be flat to the human eye, seeming to stretch forever. Also, the mass of the Cup would have its own gravity (not just centrifugal spin) and any ship traveling along the outside of the Cup would suffer a gravitic mass equal to the mass of several Jupiter-sized world. Niven and Benford’s ships don’t seem bothered by this. This is science fiction and the science here doesn’t work.

I’ll go ahead and say it: this is as close to an unpublishable novel as I’ve ever seen that’s actually achieved print. And the novel is nowhere near finished. It ends abruptly with the conclusion on no dramatic arc. It just ends. Actually, it reads like a rushed first draft of the first half of a very long novel. Had any writer other than these men turned in this manuscript, it would have been rejected despite the wonderful opening pages. I think it could have been a wonderful book had it been severely copy-edited and published complete. It made me wonder if the copy editor at Tor was afraid to say no to these guys or if there was a deadline to meet and he or she simply met it. Or (and this is worse) Tor decided to publish it as-is, hoping that readers will automatically buy the book because of who its authors are. What the novel really needed was Steven Barnes. It seems that whenever his name appears with Larry Niven or Jerry Pournille or anyone else, the writing is better, the story-telling more credible, and the imaginary landscapes quite fantastic. But not here . . . and it saddens me to say that because I’ve read everything these guys have written and admire them immensely. But the failures of this book are too numerous to count, not the least of which is the failure to describe life on the rim of the Cup in any credible detail. Niven got it right in Ringworld. Not so here.

The novel Earthbound by Mark R. Healy is a fast paced adventure, following one man’s attempt to escape a dying world and leave his sordid past behind.

Back in the Good Old (or Bad, depends on your point of view) Days, fiction—especially SF—that was written for a teen audience was called “Juvenile” fiction; I don’t believe any disparagement was meant, or at least we juveniles (except for the “delinquents”) never took it as disparaging. Nowadays teens are called “Young Adults,” and fiction […]

Do Not Disturb! Creativity in Progress