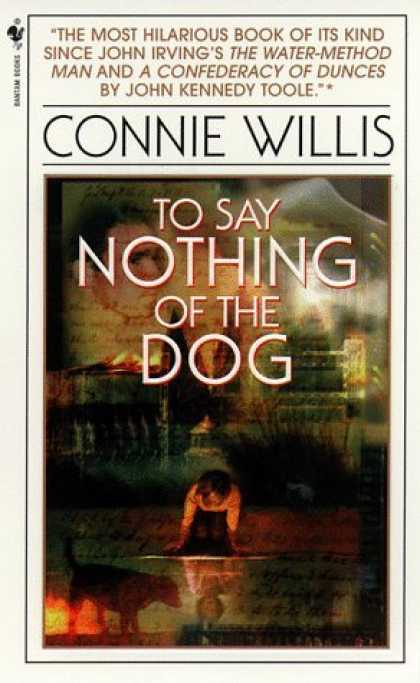 I’ve just finished reading To Say Nothing of the Dog by Connie Willis. I’m a fan. There are far too few comedies within SF/F, and those that exist still find a way to take themselves way too seriously. It’s nice to take a few days and read about how saving a drowning cat in 1888 caused the Nazis to win WWII.

Beyond the story however, are the characters, and To Say Nothing of the Dog is full of memorable characters. Verity, Tossie, Mrs. Mering, Baine, the book is populated by many wacky and fun characters. This post is not about all of them though, because they’re far too many to focus on. Rather, I’d like to focus on the main character, Mister Ned Henry.

Ned Henry is an historian, and one who has been jumping back and forth between 2057, the pre-WWII era, searching for a piece of history. An ugly piece of history: the bishop’s bird stump. To make a long story short, a woman is financing these time travelers to help her reconstruct an old cathedral. For authenticity, she needs to know what the bishop’s bird stump looks like, so it needs to be studied in the past, so it can be recreated in the future. Confused? Well, truth be told, it isn’t that important.

What is important, is that Ned Henry has been roped into doing this. And this post is an analysis of Ned Henry, and why he’s such a compelling, and fun character.

As I’m sure we’re all aware, too often writers will create a character who’s just an inch away from a Gary Stu. He’s not invincible, but he’s close. He’s not incorruptible, but you know he won’t be corrupted. It’s not clear he’ll get the girl, but he will. And that’s not so bad, but sometimes it’s just not realistic.

Ned Henry is not those things. He is a simple person, a simple historian, who holds the fate of the known universe in his hands by accident. He is not okay with this.

What makes Ned a compelling character is his everyman-ness. He’s not invincible, he’s not a genius, he’s not even well equipped to handle the situation. In fact, he screws up a bunch of times! But he’s compelling because we can see ourselves as him. As silly as it sounds, there are situations where I said, “Well, I suppose if I was a time-traveling historian who hasn’t had sleep for two weeks, and I found myself in an era I was unversed in, I would react in the same way.”

Ned is tired. He’s been time traveling for two weeks straight and is going crazy. Literally, he’s going crazy. But he has one last mission to Victorian England, one of vital importance. Naturally, because he’s so tired and becoming so crazy, he immediately forgets what he’s supposed to do once he gets there. He then proceeds to make things worse.

So many writers try to have characters form events. Everything that happens in the story is a reaction to what the character decides. In To Say Nothing, Ned is forced to react to events. Within two hours, he’s made two new friends (one of which is a dog), finds himself on a riverboat, rescues a drowning professor, and realizes he’s corrupted the space-time continuum.

Later on, he tries to get some sleep, but is confounded by the dog (the same one) and the newcomer cat, who both jump into his bed and force him out.

What’s most likable about Ned is his friendships. He’s a likable man, and characters in the book react so. He watches out for them, and always help them out when they’re in a jam. In one situation, his new friend’s dog (yes, the same one from before) has been forced to sleep in the stables. His friend begs him to sneak the dog into the house, and let him sleep in his room. Ned hasn’t slept for days, but he agrees to anyway, and hilarity naturally ensues. Who hasn’t been in a situation where they’ve been exhausted, but a friend makes a dire request, and their response is, “Ugh! Fine!” I think that scene may have sealed the deal for me.

Research Was My Key to Writing the Fight Scenes