And now, the rest of your season premieres! For those who were eagerly awaiting Symphogear G or the new Milky Holmes, I regret to inform you that they haven’t been picked up for international streaming. 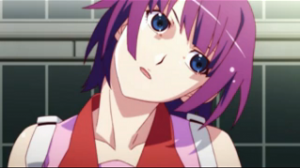 Monogatari Second Season premiere – Tsubasa Hanekawa leaves her adopted family’s house for school one day, and a giant spectral tiger walks past her muttering to itself. Later her house burns down, and she tells her parents she’ll be staying with a friend, but she goes and sleeps in an abandoned building because she’s too shy to impose on anyone.

Actually, those are minor incidents in her day. The bulk of the episode is taken up by three long conversations about a guy named Araragi: first with a younger neighbor with overtones of possible molestation that Tsubasa decides to ignore, then with Tsubasa’s best friend at school about how he doesn’t seem to be around, and then with Tsubasa’s best friend again, who wants to shower together so that Araragi will be jealous.

In contrast to the interminable conversations, the visual style is a hyperactive montage of quick shots of text and random body parts and people tilting their heads at anatomically implausible angles.

Since season 1 was exteremely popular, I’ll presume that there were, at some point, a compelling story and characters. If you try to start here, you are likely to be driven insane by the visuals before it has a chance to emerge again. 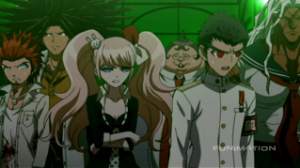 Danganronpa: The Animation premiere – We start with a short film about a daydream of the bear-thing Monokuma, who’s thinking about how fun it would be to stick someone in a rocket ship and send them on a fantastic but fatal space journey. Then the main feature: 15 superbly talented high school students are gathered in the gym at their new school, where Monokuma explains that they are now trapped there forever, except if they manage to kill one of their classmates.

The students choose to work together and search for a way out, until Monokuma distributes a video to each of them which convinces them that they must leave as soon as possible. The episode closes with the introduction of a counter gleefully tracking how many students are left alive.

It’s your country-house murder mystery on steroids. Everyone’s a potential suspect and a potential victim. The only difference is that instead of the subtle hand of the author, we’ve got Monokuma standing front and center, urging it all on. I strongly recommend this for anyone who appreciates classic mysteries… and a very dark sense of humor. 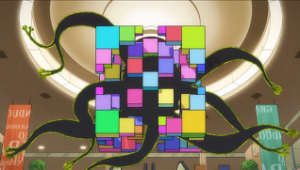 Gatchaman Crowds premiere – In an animation studio somewhere in Japan, not too long ago, a producer apparently said, “I love these shows where the hero puts on a battlesuit and fights alien monsters, but just once, I’d like to see a hero who doesn’t have to get dragged into it kicking and screaming. Also, they don’t have female leads nearly often enough.”

So meet Hajime Ichinose, who isn’t the least bit put out when a seven-foot-tall gray-skinned alien with vampire fangs materializes next to her at school and pulls a magic notebook out of her chest, nor when she then sees a boy in a powersuit fighting a bizarre manifestation at the mall. She thinks her new alien-fighting colleagues are cool and their tiny panda-like commander is cute, and she figures out how to work her newly manifested suit in no time.

Traces of the original 1970s are few. The bird motif of the old battlesuits lives on only in metaphor and the Gatchaman logo. Some of the basic setup is the same– team of heroes pulled together to save Earth from aliens– but now the commanders is an alien rather than an Earth scientist. Battle of the Planets/G-Force/Eagle Riders had substantial modification from the original source material anyway, so anyone who remembers those would probably have to treat this as a new series anyway.

But it’s off to a really good, fun start. 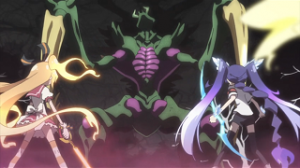 Day Break Illusion #2 – Magical girls? Check. Popping into pocket dimensions to fight evil? Check. Turns out they’re killing humans who’ve been metamorphosed by darkness and despair? Check. Nonhuman being is the one really in charge? Looks like maybe…

Now the reason for the big rush in the first episode is becoming clear: it’s to establish the premise that we’re dealing with a reasonable analogue to the Madoka Magica universe, and this series wants to pick up from there to give the scenario a new spin. Certainly it’s way too early in the game to apply Madoka Kaname’s solution to the problem. 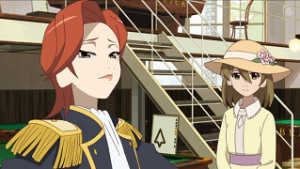 The Eccentric Family #2 – Whatever Yasaburō’s eldest brother has against gender-bending, their mother certainly doesn’t share it, as her current human guise turns out to be an ace billiards player known only as the “Prince in Black”, and she’s happy to have Yasaburō along to play the Prince’s young lady companion.

More characters introduced: there’s the second-eldest brother, trapped in the form of a frog at the bottom of a well, and two tanuki from another family who are bullying the youngest brother in the forms of giant maneki-neko, until Yasaburō’s eldest brother turns up in the form of an even more giant tiger. Then it’s off to try and find Mom, because there’s now a raging thunderstorm and she has a terrible fear of them.

And right in the middle of all this playful eccentricity, one sucker punch of a sequence that demonstrates that this will not be all silliness and light. It’s shaping up to be very, very good. 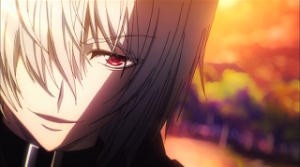 Sunday Without God #2 – To recap: Hampnie Hambart ended the lives of everyone Ai has ever known, called her an abomination, struck her twice, and threatened to kill her. Now they’re going to be travelling buddies! Bon voyage to them! I’ll be skipping the rest.

But, for those who were wondering after the first episode, yes, we do get a lot more explanation of what’s going on in this world. 15 years ago, after God wandered off somewhere, it came down with both a zombie apocalypse and a bad case of The Children Of Men. Ai, at only 12 years old, shouldn’t exist, but it turns out her mother wasn’t human. It’s an interesting world. If only it had more palatable lead characters. 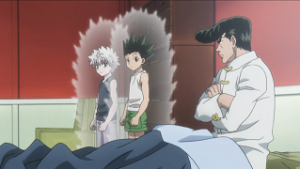 Hunter x Hunter #87-88 – What was the point of having two sets of strong Hunters fight each other rather than join forces? Perhaps that one of them is doomed to be undone by their character flaws and is only good for training the other.

As things get darker and darker at the Chimera Ant nest, it’s nice to have some humor to balance it out. (Well, I for one thought the big reveal of Shoot’s problem was pretty funny, anyway.)

Meanwhile, Palm x Gon… I’m not sure how creeped out to be. We’ve already had one character who was a teenager but looked like he was in his 20s, and Hunter x Hunter does in general love to play with appearances. 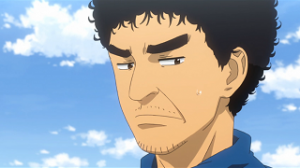 Space Brothers #65 – What’s more frightening than Mutta at the controls of a T-38? Mutta being taught to fly a T-38 by an insane pilot, of course!

My household aviation expert says that it really is possible for a pilot to remain medically certified even with semi-disabling leg problems. On the other hand, I still harbor doubts about being able to sneak modifications into an official NASA jet that increase its power by 50%… though maybe the old guy is just making that up to help convince Mutta that he won’t be stuck at the bottom of the rankings forever.

Incidentally, it is alleged on the Internet that in the live-action Space Brothers movie adaptation, the character of Deneil Young was replaced by Buzz Aldrin playing himself.

All right, decision time! Danganronpa goes on the shelf labeled, “Worth following, but not in wide enough release”, next to Attack on Titan. Space Brothers and Hunter x Hunter have made no unforced errors, so let’s continue with them. Joining them for at least the next three months: step forward, Gatchaman Crowds, The Eccentric Family, and Day Break Illusion!