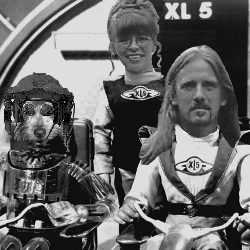 Steve Davidson is the publisher of Amazing Stories’ latest incarnation.  He acquired the opportunity to bring the magazine back into publication after discovering that its then current owner – Hasbro – had allowed the trademarks to lapse.

Steve grew up on science fiction in the early 60s, cutting his teeth on such fare as Fireball XL5, Voyage to the Bottom of the Sea, Johnny Quest and yes, Star Trek too.  His early encounters with literary science fiction include Scholastic Book Service stories by L’Engle, Silverberg and Del Rey*; when his 4th grade teacher discovered that he had nearly finished working his way through Tolkien’s Lord of the Rings, he was removed from formal reading classes and allowed to read whatever he wanted to.  This included a tour through the classics (Shelley, Stoker, Verne, Wells) and the happy discovery of a novel titled Starman Jones.  There was no looking back after that.

In the late 70s and early to mid-80s, Steve was heavily involved in convention fandom, highlighted by managing the Hugo Awards Banquet at Suncon in 1977;  this was preceded and followed by stints working as everything from gopher to head of security at many east coast regional conventions.  (His first con was the first ever Star Trek convention in NYC.)

Steve was also involved in fanzine fandom during the same period; he managed to obtain a grant to publish a semi-pro magazine titled Contact:SF A Journal of Speculative Fiction.

Steve is a former professional paintball player and a founder of that sports first professional tournament league;  he was voted a Top 100 Player of All Time in 2000, and has written three books on the subject, including The Complete Guide To Paintball and A Parent’s Guide To Paintball, as well as hundreds of articles for paintball publications and such mainstream fare as Playboy and Maxim magazine.  For several years he was the publisher and editor-in-chief of paintball’s then leading news and information website – 68Caliber.com.

*Lester didn’t really write it, Fairman did, but that wasn’t discovered by Steve until 1978, when he interviewed Lester in Philadelphia.

A 1983 Art School graduate and 1987 National Theater Academy postgraduate, Bob Bello is an independent writer/producer of sci-fi radio drama and teleplays for young adults (PG-13). Most of his stories are now novelized as standalone episodes (some with sequels) and published in the Starcall anthology. Bob currently works on his graphic novel series, Timeship, based on his radio drama […]

Ro Nagey is a science writer with some 40 years experience. A graduate of the University of Michigan, her degree was in Engineering Science, a theoretical midpoint between Engineering and Physics. Her first writing was for the magazine, Automation, which coined the word. A recognized expert in industrial computer control, she published hundreds of articles […]

REVIEW: F&SF FOR MAY/JUNE 2017—AND ANOTHER FAREWELL!