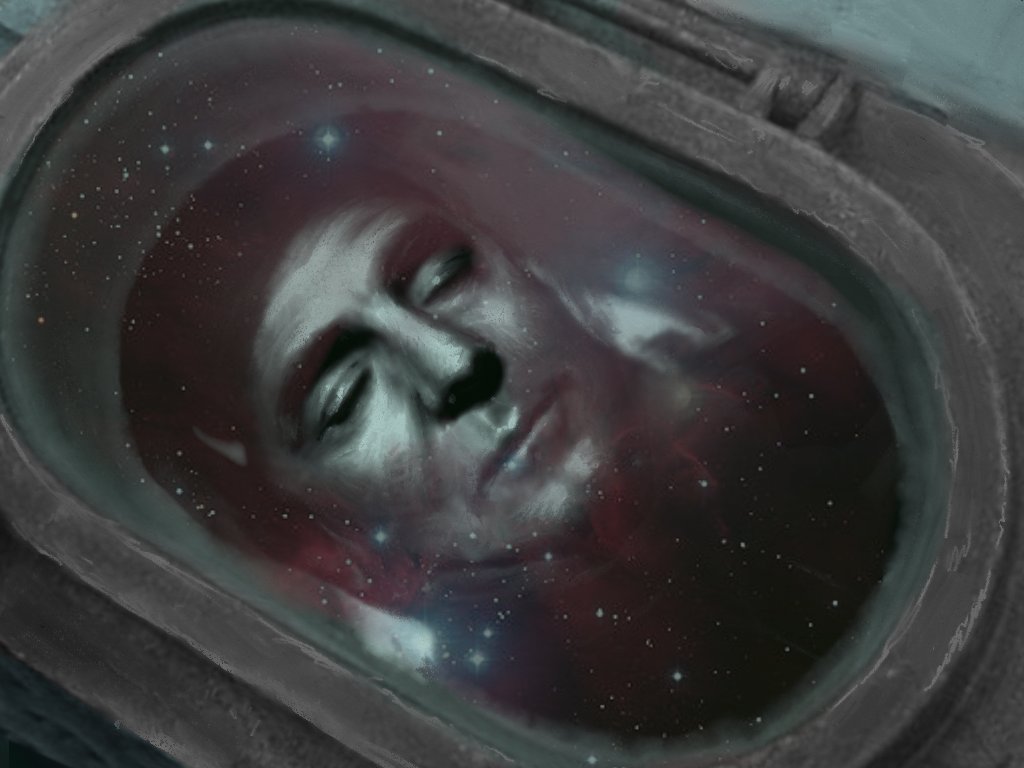 Millennia have passed since the journey began. The coffer pod continues to forge ahead on an endless voyage. Cal Wellington’s timelessly preserved corpse lay dressed in the traditional white and blue tunic of a decorated officer. His burnished head rests not upon a plush pillow, but the yielding cotton of an old folded flag he defended to the end.

A thick titanium shell protects the plush interior and its historic passenger from the harmful elements of space. In his day, the elliptical capsule had once been called a pyre-bullet. That was back when chivalry was the last bonding fiber between morality and the duty of a blood bathed race.

Even sadder were the days when trodden battle ships resorted to using these majestic caskets as projectiles if missile allotments ran low. The practice was a testament of a fallen civilization for many of them were already full at the time. In retrospect, Cal was one of the lucky ones.

Cal’s funeral had been more distinguished than most, given his high rank, celebrated lineage and storied battle exploits. But here, this far from home, a heroes journey goes unseen. How many direct descendants have perished? Maybe all of them are long since gone. Had humanity itself followed suit?

At the speed of light, the shininess of the black pod is never witnessed. A sad thought, for the image would surely be spiritual. Even at its slowest velocity shortly after launch, its chameleon shell softly blended in with the shadowy void between the stars before blinking our forever.

When the funeral arrangements were made, the random trajectory was based on the infinity of space – the simplest quixotic version of heaven one could imagine. It was to be a never ending ceremonial trip forged in a romantically gallant time. Some believed it was a way of allowing the soul’s perpetuity to continue. Cal believed this too. Would he feel this way today?

The heavens were dark except for a few glistening embers during his interment launch. The band played the classic battle hymn as the pod left the flight deck, its silent glowing contrail dissipating into the void of space. Who could have imagined that the then distant universe of Circinus would end up being along its route?

In life, Cal was boisterous and full of life. In death, he kept silent. His memory, his legacy, his mere existence compressed into the few trinkets his friends and comrades discreetly placed alongside him before the heavy lid was sealed forever. A medal of valor from one of his many grateful subordinates, the last known letter from his estranged wife full of tears and hatred, a frayed photo of a group of soldiers with raised tankards in the dark corner of a pub, and a golden whale broche from the one woman who truly loved him lay at his side. This was all that told his story. Cal’s story was monumental and tragic. Like humanity itself, it was a story that may never be discovered in the silence of space.

Like a whisper, the pod continues on. Circinus’ monstrous wheel spins ahead like a child’s sparkling firework display. The one time magenta streamers of the universe flailing outward now look pallid in their growing closeness.

A dedicated student of the sciences, Cal would have been captivated by the raw mathematics behind his journey. The complex calculations of an object skimming so fast along the thin fabric of time while continuing to pick up speed would have been a welcomed challenge. Even as the pod reaches the gaseous V-shaped shroud engulfing the violent center, even as the radioactive temperatures increase to absurd magnitudes, the pod continues to accelerate toward the swirling nothingness that beckons it.

Everything happens instantaneously; a million reactions in less than a blink. The pod stretches across the event horizon, elongating into a long thin wisp. Its momentum curves into the spiral as it sinks deeper and deeper into the hungry black hole. Just like the life that winked out so long ago, Cal Wellington is gone…again.