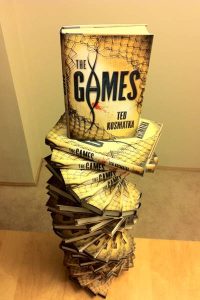 I’m glad I started with The Games by Ted Kosmatka as my first foray into science horror. I don’t think I could pick a better book that seamlessly melded horror and SF tropes.

The year is 2044 and the 38th Olympic games are about to begin. In this amoral future, genetically engineered gladiators fight each other in an Olympic event designed to showcase the scientific advances of the competing nations. It has quickly become the most popular sporting event in the world, with billions of dollars tied up in it. There is only one rule: no human DNA.

Our protagonist, Silas Williams, is a brilliant geneticist in charge of the American gladiator program. Although having led the United States to gold in the last three Olympics, his design is passed over for a design envisioned by an experimental supercomputer. The result is a gargoyle-like creature with a host of genetic advantages and a genome never before seen on Earth. Not even Silas, with all his genius and experience, can understand the horror he had a hand in making. And no one, he fears, can anticipate the consequences of entrusting the act of creation to a computer’s cold logic. As Silas, with the helps of xenobiologist Vidonia João, try to understand what the computer created, they begin to realize just how dangerous this powerful and intelligent creature is to everyone.

The Games reminded me of the 2009 film Splice, but that is not meant to be a knock against the novel or Ted, as his work is the vastly superior creation. Ted’s debut novel presents an intriguing mystery about what the creature really is, while providing a healthy dose of thriller and horror. Silas and Vidonia are likable and realistic characters, but it is the tragic computer programmer Evan Chandler who I think really stole the show, especially when you factor in his relationship with his “son” Pea. There is a lot of science lingo, but it is not difficult to read and reminded me of how Crichton presented science in his works, but without the graphs. Meanwhile, the gladiator is a terrifying monster, reminiscent of Frankenstein’s monster on steroids, but it is not until the end do you realize just how deadly the results of unethical science can be. That is one of the central themes to the novel and there plenty of ethical arguments we are likely going to have in the future.

The novel is not without its flaws. It does seem odd that in the near future we will have an Olympic sanctioned blood sport, but single moms will still get disapproving looks. So we did a 180 on animal welfare, but stayed the course culturally on children born out of wedlock? Meanwhile, I could have done with less detail on the Silas/Vidonia romance I saw coming a mile away. Instead, I would have loved to see more pages devoted to gladiator’s growth and evolution. I feel it quickly transitioned from a mystery of science to an unstoppable engine of death way too quickly. Then there is Baskov, the greedy head of the Olympic commission, who is a somewhat one-dimensional villain who can’t see the danger the gladiator represents because of the dollar signs dancing in front of his eyes. Although I realize you are not supposed to like the bad guy, I the character would have been better if the reader could relate to him and where he is coming from.

Don’t, however, let The Games’ flaws discourage you from reading it. It is still a good novel with plenty of horror, mayhem and general weirdness to keep me turning to the next page. Certainly The Games was a good debut novel for Ted Kosmatka and good start for my journey into science horror.