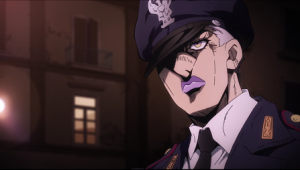 JoJo’s Bizarre Adventure: Golden Wind #6 – Well, not all of Bruno’s team are juvenile delinquents. Leone Abbacchio actually had a career as a police officer before giving in to a corrupt system, being kicked off the force in disgrace, and then getting recruited by Bruno into his support group for shirt-impaired young men.

Abbacchio’s Stand, as befits a former officer of the law, is not much use for fighting but excellent for investigation. In fact, it’s so useful that in many stories it would destroy the plot completely. But this is a moment for JoJo to show what makes it great. Because the opponent’s power is so carefully designed and used, what looks like a slam-dunk for figuring things out only provides some more cryptic clues that Bruno manages to put together just in time.

If you’re watching this show with English subtitles, you’ll have noticed by now that the Stand names are significantly different from the original Japanese ones. In fact, you may have noticed that the author seems to be naming them after English-language bands and albums. (Gold Experience was a Prince album; Sticky Fingers was a Rolling Stones one.) The fact that these names have nothing to do with the Stands’ powers doesn’t matter. To Japanese readers and viewers, if it’s in English, it just sounds cool. To English-language publishers and distributers, it sounds like a potential lawsuit in the making, thus the name changes. 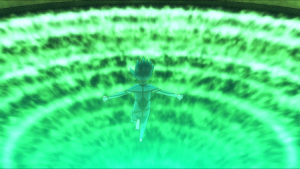 The Girl in Twilight #7 – As her friends become smartphone zombies, Asuka administers some tough love and then sets out to find Chloe. After rescuing Chloe from a VR trap, everyone piles back into the boat and heads for the final confrontation with White Goat, where Chloe levels up and saves the day after being subjected to the most ridiculous fighting outfit yet.

Chloe’s moment of self-actualization looks for a while like it’ll be an acceptance of immersing herself in a group, but The Girl in Twilight comes through again in the coda. She’s learned to reach out to others more, but keeps it on her terms. That leaves us with Yū and Asuka to have their personalities examined, and Asuka’s little brother’s disappearance to be explained.

Evil Yū is a bit of a puzzle. She seems to like mixing things up, but she’s genuinely helpful at times, and she does seem to be truly surprised at the news that a Clutter has turned up in the latest timeline. The appearance of Clutters in the timelines she points Asuka to are too coincidental to not be linked to Asuka’s travels, but maybe it’s happening unwittingly. It also seems, despite her hostility, like she’s truly happy to hear Warrior Asuka say something nice about her. So I’d place my bet on the spotlight swinging to Yū now, to see how many of these complicated feelings she shares with her double. 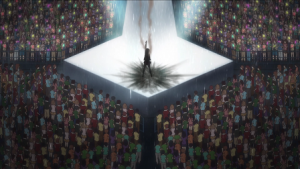 Zombie Land Saga #6 – Franchouchou is now popular enough to start on modern celebrity rituals like selling autographs and photos. Junko, who turns out to be from the 1960s or so, thinks commercializing access like this to be extremely creepy. Wait until she finds out about how modern Japanese idols are expected to hide their personal lives in order for male fans to fantasize about having them as girlfriends.

Meanwhile, Ai is struggling with her death, not just because thunderstorms now freak her out, but because her tragedy has been used to build a narrative around her old group’s success. In a way, she’s responsible for their popularity, but in a way she can’t share.

Meanwhile, new tidbits about Kōtarō: whatever he is, he still likes a good bath and good hair product, but not so much that he can take his sunglasses off. And that, in addition to his necromantic talents with humans, he’s also reanimated a webpage from 1995. 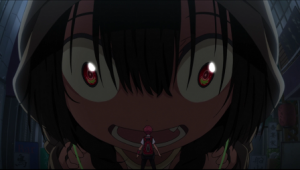 SSSS.Gridman #6 – Akane has all but told him she’s involved in the attacks, and Yūta still hasn’t figured it out. So a brand-new character is dropped in to sit him down and explain the situation to him slowly and in small words. Even after that, Yūta is stuck on asking why a person with godlike power would want to stay in high school, and not, say, “How do we get back to reality?”

Gridman’s accessories are a little lost on the nature of the world as well. They apparently didn’t know that the kaiju could have human forms. Maybe that’s something specific to the place Yūta is trapped in, and the kaiju only have the one form in the real world?

As Akane and Shō agree that kaiju are the real stars of any monster-fighting show, SSSS.Gridman proves it by making them smarter and more interesting than the heroes. Yūta and Shō still barely have personalities, while Anti has an inner struggle playing out and the new kid is immediately engaging. 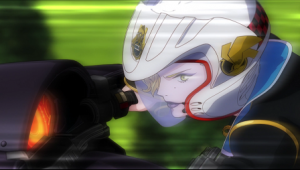 Double Decker! Doug & Kirill #7 – Trouble is happening at a high school in the run-up to the prom, which means the detectives need to explain to each other what a prom is for the benefit of Japanese viewers. This may be the reason that the rest of the episode feels a little rushed. There isn’t much reason to have dragged out the investigation part further, since Max is as smart as anyone in Seven-O and it’s reasonable for her to figure out the perp that fast, but her backstory feels like it’s given short shrift.

Or rather, it’s Conor who’s given short shrift. A trans woman takes the frightening step of coming out publicly with support from her best friend, is ostracized for it, enters a deadly spiral of addiction, and somehow this gets framed as the best friend’s tragedy. Anime has always had a bad case of Bury Your Gays, but seeing it in a show which is otherwise as good as Double Decker has been until now is still a big disappointment.

What the writer may have been trying to get at is the way that the most vulnerable members of society become easy prey for drugs, but that point could have been made so much better in so many other ways.

This week Steve writes a very short column about a new movie. Or is it new at all? It’s from a Japanese manga and animé series. And Steve has to go vote for himself in the Auroras. Will you be voting too?