In this week’s viewing: Our final new show of the season at last, and a lineup finally takes shape. 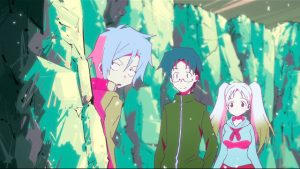 The Idaten Deities Only Know Peace premiere – When demons invaded the world, the Idaten arose to fight them. When the demons were finally bound, all but the youngest Idaten, Rin, sacrificed themselves to make sure the seal was good and strong. Eight centuries later, Rin oversees a new generation of Idaten, whiling the time away by training them with ridiculously brutal methods. But peacetime is about to come to a screeching halt, thanks to a mad scientist who’s talked an army into excavating something buried in the arctic ice…

That something is of course a demon, giving three of the young Idaten a chance to show off their incredible powers and toughness and the animators a chance to show off their artistic talents with stylish colors and cool action. And just when the premiere has settled into a groove of hip, slightly humorous ultraviolence, the scene changes to a gang rape of a nun and suddenly it wants to be all serious.

Instead, that tonal whiplash at the end kills the whole thing. Idaten Deities wants to be both a fun action show (if you can stand jokes like “Rin literally beats her students to a pulp to develop their toughness”) and a super-serious edgy show, and by trying to be both it’s just a waste of a decent production budget. Take those content warnings seriously and avoid this.

That’s the last true premiere of the season, and thank goodness for that. Magia Record will finally be rejoining us next week, and it can have its place in the lineup back as long as it doesn’t fall on its face right out of the gate. 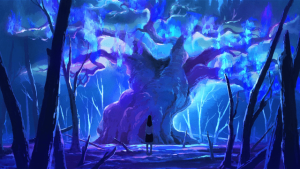 Sonny Boy #2 – Having crash-landed next to a desert island with no other land in sight, but with working plumbing, electricity, cell phones, and online delivery, the students set about making themselves comfortable. Until things start randomly bursting into flames, and then someone must be blamed.

It looks like the unifying premise of Sonny Boy is that the students will move into spaces that enforce different sorts of rules. In the void, it was the rule of law, and now it’s a rule that nothing is free. (Unless it’s explicitly specified to be a gift, perhaps, seeing as the hat that Mizuho gave Nagara doesn’t combust.)

With everyone out of obvious immediate peril for a while, Sonny Boy has a chance to let its characters develop a little more. Well, some of its characters. Hoshi demonstrates that he’ll move to hide behind whatever authority figure he’ll prop up, and Rajdhani gets to establish himself as the Man of Science. Making the guy of Indian descent a science and computer whiz may feel a bit stereotypical, but as practicially every Indian character I’ve seen in anime up to this point has been presented as a barely-clothed primitive, this feels like progress.

What would feel even more like progress would be if Sonny Boy could take the critical look it wants to give modern society and point it at its own treatment of male and female characters so far. Nagara, Rajdhani, and Hoshi are all being defined by the choices they’re making, while Mizuho and Nozomi are important to the story so far only due to their powers. It sure would be nice if they, or the student council president, or any of the girls, could get to take a more active role. 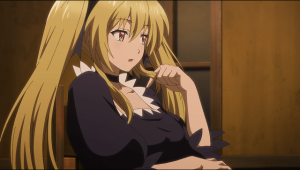 Peach Boy Riverside #4 – Popping back in time, we see what happened when Salterine was a pampered princess with wanderlust who crossed paths with an ogre-slaying traveller, and decided after seeing the horrors of the outside world that she still wanted to see it.

Mikoto does his very best to convince the naive, misgendering aristocrat that she has a sweet deal right where she is, but she won’t hear it. And when a pile of dismembered ogres only temporarily dissuades her, well, it starts to look like she’s the sort of person who could handle travelling in a world full of monsters.

This is actually the proper episode 1. It’s not just that the story is being told non-linearly, the episodes were made in the same sequence and are now being deliberately aired out of order. This sounded like a stunt and a recipe for complete incoherence, but I think it’s working out fairly well. Having gotten to know Salterine through her meetings with Frau and Carrot, we already know she’s going to be a perfectly good heroine and don’t have to be re-introduced to her on the road the way we would have been if this had been the premiere. 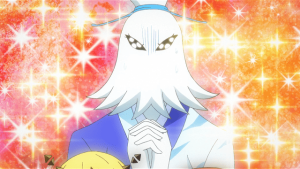 Welcome to Demon School! Iruma-kun season 2 #15 – Giant monsters casuing mass destruction at the demon world’s finest amusement park does, in fact, raise Kalego’s fun level immensely. Now he gets to enjoy setting a group of his misfit students a ridiculously hard problem and watching them struggle with it. There may be a real hope that they’ll grow from the experience (and he’ll probably jump in to save them if necessary) but he definitely doesn’t see any reason to make it a more pleasant experience.

In another part of the park, Iruma is confronted once again by the fact that the demon world is populated by demons, who do not have the reflexive sympathy for each other that most humans do. But he’ll probably pull his classmates into fighting the nearest monster through the force of his own personality as he always does.

That leaves Opera’s group of students, where the likeliest thing to get to fight is that Ameri does feel a sense of duty toward her fellow students. She’ll at least want to rescue them, especially if she focuses on the terrible peril that Iruma might be in. 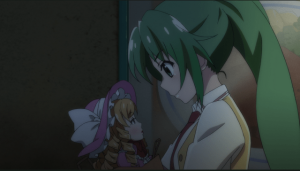 Higurashi: When They Cry – SOTSU #5 – Mion continues to spiral into paranoia, assisted by a nudge here and there from Satoko and the competition from Shion for Keiichi’s attention. Eventually she convinces herself that Shion has brought Oyashiro’s curse on all of them, and that she’s merely acting out the curse, but that she can still protect Keiichi somehow…

What comes next is Rika dropping her guard and chewing Keiichi out for having wandered off during the festival, then Rika’s disappearance until she’s found dead in the school’s septic tank. Originally it looked like whatever enemy was pursuing her had killed her. But a couple episodes ago, it was mentioned that if she killed herself, it’d be either with a knife or by drowning. So that may turn out to be suicide.

It was also emphasized recently that Satoko has to die soon after Rika to follow her into the next loop fully aware. But we know that Satoko died well after Rika in this case. Will that be a big enough interval for Rika to get a rest in the next arc?

CLUBHOUSE: Review: Barbarians of the Beyond, a novel by Matthew Hughes

Mark Gatiss and Steven Moffitt, who created the BBC’s “Sherlock,” take on Dracula with the help of Netflix. Is it good? Well, yes and no. Read the review but BEWARE OF SPOILERS!