There are quite a few exciting SciFi Romance series out there; here’s an introductory sampler 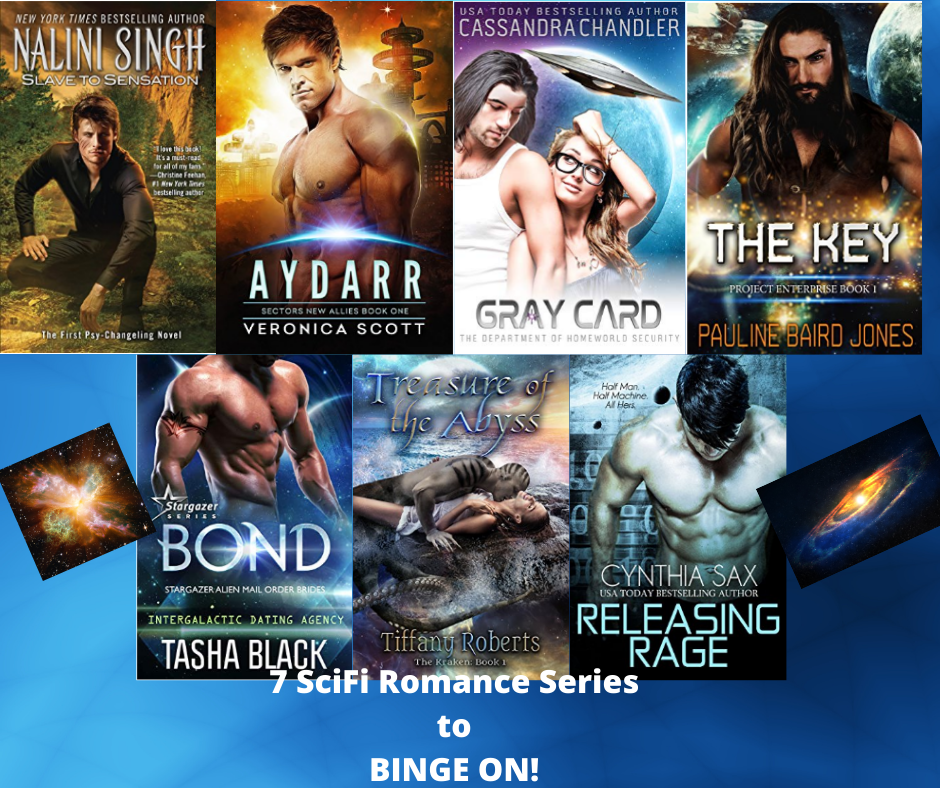 What better way to start the New Year than to discuss some of my favorite series starter books? I love binge reading an entire series and fortunately there are quite a few good ones to choose from in the scifi romance universe.

Nalini Singh created a world I want to live in, with the release of her Slave to Sensation in 2009. I classify this series as SFR because it takes place in the future, in an alternate world, with three races vying for control of the world. Personally I’m on the side of the Changelings, who can shift into various animal forms, live in packs and are full of emotion. The series focusses on two packs – the cats, led by Alpha Lucas and the wolves, led by Alpha Hawke. Opposing them (and believing they run the world) are the emotionless Psy, led by a nefarious council. The Psy have vast mental powers but also a great deal of evil embedded within their ruthless culture. One subset of Psy is the Arrows, supersoldiers who enforce the will of the council. In the first book, Sascha, daughter of a council member, believes herself to be fatally flawed because she has emotions and falls in love with Lucas.

I should mention there are plain humans as well in the world, who are kind of caught between the two opposing forces of Psy and Changelings.

The series has fifteen books, and then there’s a spinoff series, which I’ve found equally satisfying. Over the course of the series the author excels at weaving together threads, making small details from early books suddenly take on new meaning and rehabilitating some characters the reader may have loathed but who are suddenly revealed in new light. Two of my favorite books of all time are included in this series – Caressed by Ice and Shield of Winter, both of which focus on Arrows.

The series is best read in order but the books do stand alone to some extent.

Next on my list would be Pauline B. Jones’s Project Enterprise series, which begins with The Key, released in 2013, and continues on through eight books so far.  The series is a sprawling space opera, with time travel woven in. One of the things I enjoy most about Ms. Jones’s writing is the way her plots unfold literally on every page. Reading one of her novels is like peeling an onion, with each new layer of details advancing the action until by the end the reader is amazed by the sheer complexity of the plot. She can also craft astonishing alien species. I still shudder over one of her spider villains and I’m not normally a victim of arachnophobia but this character stays in my memory.

Her books work well as standalones and while there’s definitely romance, she doesn’t go into steamy detail.

On the other end of the steamy spectrum, there’s Cynthia Sax, with her “sizzling cyborgs”.  Expect a lot of sexy on the pages in this popular SFR series. And some violence. The first book Releasing Rage was released in 2015 and I’d never read anything like it before, frankly. My eyes were wide open by the end! The central theme of her series is that the cyborgs were created to fight space wars for humanity and in the course of their history have been treated horribly by their masters. A group of cyborgs have managed to free themselves and in each book the battle to help other brother cyborgs escape is waged.  Ms. Sax has a lot of fun with the various models of cyborg and the situations in each book, as far as the relationships with human women. There are twelve books so far, as well as spin offs and other novels set in the same universe, so there’s no shortage of reading material if you find yourself enjoying the ride. Breathing Vapor and Ghost of a Machine are two of my favorites, although Dark Thoughts in the spin off Refuge series is my favorite of her titles.

Tiffany Roberts is a husband and wife writing duo who have spun out a variety of SFR series but two are of special note. First would be their Kraken series, set on a colony planet in the far future and featuring conflict and romance between a race of genetically engineered sea dwellers who have the tentacles and attributes of octopi but with human torsos (I know, I know but bear with me – they make this work in stellar style) and the land dwellers. Treasure of the Abyss is the first book in the seven book series and the world building is wonderful. The undersea scenes really drew me in and although I’m not at all a fan of “tentacle sex”, I truly enjoyed this series and read each book eagerly.

The co-authors have a new series, The Infinite City, which features more ‘alien’ aliens as heroes and readers can’t get enough of these titles. There are only four so far and Silent Lucidity is first.

The writing duo has a vast experience in video gaming and bring that viewpoint and expertise to their stories, which I believe differentiates their books somewhat from other SFR.

I have an award winning series going on as well, the Badari Warriors. Genetically engineered soldiers of the far future, the Badari were created by alien enemies to fight humans. But then the scientists kidnapped an entire human colony from the Sectors to use as subjects in twisted experiments…the Badari and the humans made common cause, rebelled and escaped the labs. Now they live side by side in a sanctuary valley protected by a powerful Artificial Intelligence, and wage unceasing war on the aliens. The first book sets up the situation and unites the man who’ll lead the entire war and the human woman he loves, who plays a major role in freeing the Badari. Each book focuses on a different couple for the most part, although other characters reappear. I advance the series arc somewhat in each book but the couple does achieve their Happy For Now. Aydarr was first in this fifteen-books-and-counting series.

I’ll finish with two lighter series,  Cassandra Chandler’s Department of Homeworld Security (thirteen books, the first is Gray Card), which has a bit of a 1950’s scifi vibe to it although set in the present and Tasha Black’s Stargazer Alien Mail Order Brides Series, which began in 2016 with Bond and contains fifteen books. Again we have aliens on Earth that only a few people are aware of, falling in love with human women. Tasha’s settings for her stories are varied and fun. My personal favorite is Kirk, set at a fan convention where a woman who was a child star in a TV show much like “Star Trek”, complete with a signature piece of dialog fans always want her to repeat for them, falls in love with the man she thinks is her bodyguard. We know he’s a somewhat puzzled alien. Usually mistaken identity tropes leave me cold but this was done with a deft hand and was quite amusing.

Tasha typically wrote this series in loosely connected trilogies, so there were two more books which had their starting point at the con and were also quite fun. But the whole series is a reader favorite.

The fun thing about these authors (and of course many others I didn’t have space or time to mention) is that the series each contain quite a few books and they’ve written other novels, sometimes in series, on occasion in other genres. So if you enjoy their ‘voice’, you’ll be able to find a robust selection of other titles to choose from as well.

Meet Zorg and the other robot creations of Lynn Taylor Fahnestalk.

You know what to do