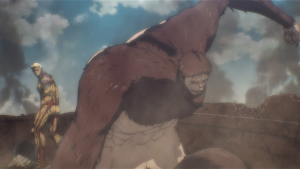 Attack on Titan final season premiere – We interrupt your regular season for a very, very late fall premiere. Or a very early winter one. Attack on Titan is such a huge phenomenon that it can get away with ignoring the strict quarterly cycle of Japanese TV. And it is here now to remind us that it got that way because it is very, very good.

By the end of last season, what was once a story about a guy trying to get stronger and beat all his people’s enemies had transformed into one where the characters were looking for a way out of the cycle of violence. When this episode picks up four years later, war still rules, and the Titans are in the middle of a brand-new conflict. But something new is happening that terrifies everyone: technology marches on, and the latest weapons are giving ordinary humans the ability to take the Titans down. Once the ultimate expressions of power, the Titans are now vulnerable.

Longtime viewers can work out the unfortunate implications of this development for whole groups of people we’ve met in previous season. Some people are no longer the threat they once were. Some are reaching the end of their usefulness.

New viewers will be a bit at sea here, and I strongly recommend that you not start here. Instead, if you need something new to binge over the remaining holidays, catch up on the previous seasons and then join us for regular check-ins starting in January. Because this is definitely going in my winter lineup. 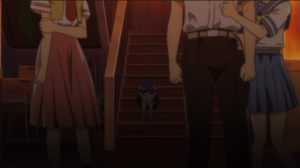 Higurashi: When They Cry – GOU #10 – After learning that Satoko has been forced to move back in with her abusive uncle, Keiichi and friends are determined to save her. Next they learn that adults are useless. Which is probably why Keiichi has an impossible memory of going after Uncle Teppei with a baseball bat.

It’s a common belief that a narrative about abuse requires depicting the abuse, but Higurashi masterfully demonstrates that this is not the case. We never see Teppei doing more than speaking harshly to Satoko, but Satoko’s freakout at the end of the episode communicates everything necessary about what is happening to her.

So when Rika said last time that Satoko could use a big brother figure, she didn’t just mean as a friend, she meant as a protector. She meant someone who can remove the abuser from Satoko’s life permanently, as it’s implied that Satoshi did with their aunt. And Rika makes the choice to encourage everyone to step back and let Chie try to check on Satoko, knowing what the consequences will be for Satoko. To provoke Keiichi into that attack that he seems to remember from a previous time through the loop? 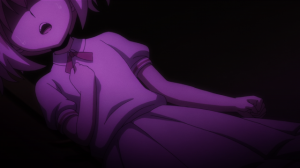 Talentless Nana #10 – Jin demonstrates that he could kill Nana, and but he wants to get to know her first. Between his prying and Michiru’s kindness, Nana feels her long-buried memories rising up, until a fresh murder provides a welcome distraction.

An awful lot about Nana’s backstory is sketchy, and not just because she could be distorting it to play on her listeners’ sympathies. The police think the murderer came in through Nana’s unlocked window, but how much does that matter if the murderer was Talented? Doesn’t it seem a bit like the whole thing might have been orchestrated to produce the guilt that would start developing Nana into a killer of the Talented? And where did the part about the culprit being Talented come from, anyway? And how does this fit with both her parents having jobs that involved the Talented?

There’s also still the puzzle of Jin’s powers. I’m going to guess that one of his limitations is that he can’t duplicate someone who’s dead; that would be why he can be Kyōya, Michiru, the flame and ice guys, and the cat, but not Yūka. As for why he can’t be Nana, perhaps he can only duplicate the Talented? In which case, he’s already figured out Nana’s big secret. 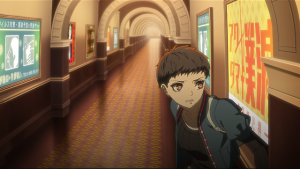 Akudama Drive #9 – The Courier’s job isn’t over until he can deliver the Sister to the Brother, so back he goes with her and the Swindler to where the Brother is confined. Unfortunately, so does the Cutthroat, because this episode is marked as an homage to The Shining and there is a desperate need for someone to be chased through a bunch of long corridors by a psychopath with a knife.

Unlike The Shining, there is a handy room full of lightsabers with which to dispatch the psychopath in a manner which momentarily puts this episode in danger of becoming an homage to Monty Python and the Holy Grail instead. Who’s next? I’d bet on the Hoodlum to be the next one cut from the cast, since the Doctor is increasingly looking like the final boss, the Sister and the Swindler have to survive, and the Courier seems like he might pull through as well. 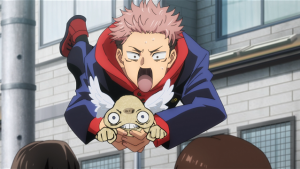 Jujutsu Kaisen #10 – Mahito talks philosophy for a while with his new pet human, until they are rudely interrupted by a good guy attempting to take Mahito down. While Nanami deploys all his stereotypical salaryman lines, Yūji is assigned to make contact with the surviving witness to what Mahito did, evaluate his power level, and take appropriate action.

Yūji is clearly not going to be a by-the-book sorcerer, but he does find his way to an appropriate course of action to win Junpei over. And just in time, as Junpei was starting to contemplate trying a little murder on for size.

In fact, we’ve learned a great deal about Junpei’s inner life, far more than about any other character in the series other than the protagonist. He gets to talk philosophy, he gets to be very right at English (a common proxy in anime for demonstrating that a character is a cool person), and the clincher is that he shares the author’s taste in movies. Yes, I believe we’ve found the self-insert character. 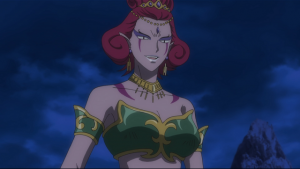 Yashahime: Princess Half-Demon #10 – The next bounty-hunting job concerns a pair of serpent-people whose endless sibling rivalry has destroyed a village with collateral damage. When they take over Tōwa and Setsuna, events are set in motion for the two sisters to reinforce their sisterly bond and perhaps start recovering Setsuna’s memories.

Yay for getting some development in Tōwa and Setsuna’s relationship. On the other hand, yes, those people were basically nagas and their leader is supposed to look like she’s from India. And just last week the villain was from China, whereas all the heroes are 100% Japanese. Oof.

Yashahime has never set out to be subtle— I mean, this is the show which is still reminding us who the main characters are every week— but this marks a new level unsubtlety. Not only do we have our second foreign villain in a row, the nagas are literally the Evil Tribe. The “ka” in the tribe name, “Joka”, “Kinka”, and “Ginka” is the character 禍, which means evil, calamity, or misfortune.