We’ll take the occasion of the release of Futures Past Editions*’ Amazing Stories Classics:  The Best of Amazing Stories The 1931 Anthology to remind you all that we also recently released the second volume in Edmond Hamilton’s Captain Future series – The Guns of Pluto, by Allen Steele. 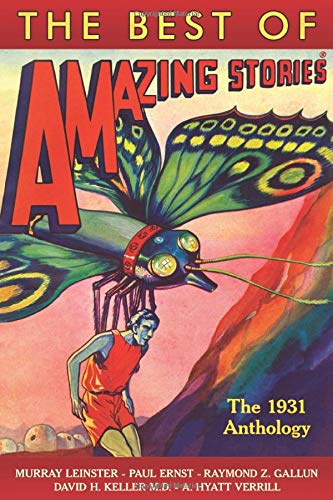 From the promo for The Best of Amazing Stories The 1931 Anthology:  1931 saw the U.S. and the rest of the world sunk low, despairing in the depths of the Great Depression. But there was rejoicing at Amazing Stories because all and all, story for story, 1931 was Amazing’s best year ever. Among them, the now classic works we have chosen for this anthology:
“Prima Donna 1980,” a dazzling story of art, ambition, tragedy, business, television, and song, filled with very human characters, that inevitably reminds one of C.L. Moore’s “No Woman Born.” Written by Bernard Brown, a motion picture sound technician, Bleiler rates “Prima Donna 1980,” as “one of the best stories” in the history of Amazing. Patrick Dutton’s masterpiece of style,
“The Beautiful Bacillus,” a unique work straddling the line between humor and tragedy. Bleiler pronounced Dutton’s story beautifully written in “a complex, tightly organized prose, handled with considerable grace and elegance”…“subtler than Lovecraft” and “certainly worth rereading, [it is] one of the few stories in early Amazing that deserved to be preserved.” (but ironically it has never been reprinted until now).
A. Hyatt Verrill‘s “The Exterminator,” an O’Henryish short story which anthologist and critic Sam Moskowitz reports “immediately became one of the most popular stories of that length in the history of the magazine.”
One of David H. Keller MD’s top-notcher satires that still remains relevant today, “Service First,” an acid-tinged solution to rising rents (a problem even then), an aerial mobile home that only came down for refueling.
“The Incredible Formula” by Paul Ernst, a tale of the chemically resurrected dead replacing workers in plants and fields across the U. S., also aspired to something more than the mere unfolding of a new scientific discovery, with its carefully crafted economic subtheme and with an “unusually cynical, unexpected end (Bleiler).”
Raymond Z. Gallun‘s “The Lunar Chrysalis,” about an intelligent mollusk civilization on the moon, a fleet of spaceships aimed at the Earth, a desperate attempt by two explorers to escape and warn the home world, and a surprise ending few readers of the time could have anticipated—“nicely told” writes Bleiler.
Paul Bolton‘s “The Time Hoaxers,” about which little can be said without giving too much away, except that nothing is what it seems at first or second glance, and the truth is only revealed in a final coda.
Finally, Murray Leinster, who had been writing science fiction for more than a decade (and under his real name, Will F. Jenkins, had been selling memetic fiction to slicks like The Saturday Evening Post and Collier’s, where he routinely appeared next to Pulitzer Prize winners), contributes “The Power Planet,” a story which reached heights that would rarely (if ever) be reached again until Campbell assumed the helm at Astounding, and combined politics with “a surprisingly good method for gathering solar power in orbit, then transferring it to Earth” (Technovelgy.com), plus a sophisticated sex triangle integral to the plot, “strength of characterization, and accuracy of prediction that stand head and shoulders above other” stories (Wollheim).
As with the earlier volumes in the series we have included all the original accompanying illustrations for each story we have selected, as well as the original magazine blurbs.).
Amazing Stories 1931 – it was a very good year, and we think, helped us create a very good anthology.
And you can find it in our store and here. 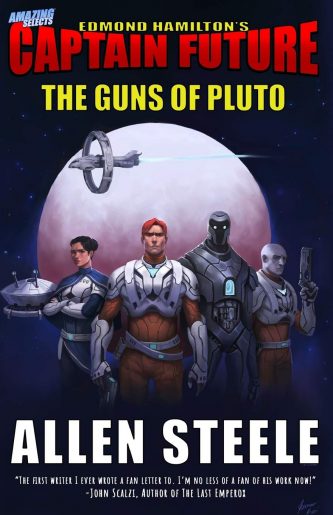 And the recently released The Guns of Pluto – Edmond Hamilton’s Captain Future Volume 2 by Allen Steele:

At the edge of the Solar System, CAPTAIN FUTURE and the Futuremen discover a plot of interstellar proportions as they confront THE GUNS OF PLUTO.

“Cold Hell” was what they called the Sputnik Planitia Penal Colony on Pluto: the toughest, deadliest penetentiary in all of space, a lock-up so remote and forbidding that it was built within an immense iceberg and is guarded by a race of cannibals.  Considered escape-proof, Cold Hell was where the worst of the worst were sent, never to be dealt with again…until now.

The mysterious Black Pirate has returned, in one swift move blowing open the cell block doors and taking hostages.  He’s made demands for the liberation of his hostages, demands only one man can fulfill:  Curt Newton, the adventurer known as Captain Future.  Yet, as Curt and his strange crew race across the solar system, are they unwittingly entering a cunning trap laid for them by an old enemy?

Strap in for the second installment of an epic space opera adventure by multiple Hugo Award-winning author ALLEN STEELE as he reinvents one of the classic Golden Age heroes of science fiction, Edmond Hamilton’s CAPTAIN FUTURE.

Which you can find in our store and here.

Of course, we have a growing library of offerings as well. Just as a reminder –

The Edge of Tomorrow Maxes Out Today