Inspired by experience in the Coast Guard, this milSF novel is explored with an interview with the author 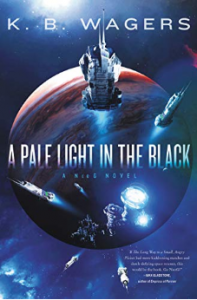 I’m always on the lookout for new military science fiction novels and when I found A Pale Light in the Black: A NeoG Novel, I was intrigued. I especially like the fact the plot was inspired by the real life mission of the U.S. Coast Guard. Author K. B. Wagers was kind enough to shed more light on the book and the influences which led them to tell this excellent story.

The book’s blurb:  For the past year, their close loss in the annual Boarding Games has haunted Interceptor Team: Zuma’s Ghost. With this year’s competition looming, they’re looking forward to some payback—until an unexpected personnel change leaves them reeling. Their best swordsman has been transferred, and a new lieutenant has been assigned in his place.

Maxine Carmichael is trying to carve a place in the world on her own—away from the pressure and influence of her powerful family. The last thing she wants is to cause trouble at her command on Jupiter Station. With her new team in turmoil, Max must overcome her self-doubt and win their trust if she’s going to succeed. Failing is not an option—and would only prove her parents right.

But Max and the team must learn to work together quickly. A routine mission to retrieve a missing ship has suddenly turned dangerous, and now their lives are on the line. Someone is targeting members of Zuma’s Ghost, a mysterious opponent willing to kill to safeguard a secret that could shake society to its core . . . a secret that could lead to their deaths and kill thousands more unless Max and her new team stop them.

Rescue those in danger, find the bad guys, win the Games. It’s all in a day’s work at the NeoG.

KBW: So the primary influence would have been that I was working within some specific parameters when I started developing A Pale Light in the Black. I was approached by David Pomerico at Harper Voyager to create the NeoG and their world, basically given the idea of a space Coast Guard and the Boarding Games and told to have fun. So I did!

Other influence were some silly things like the movie ‘Dodgeball’, any random popular meme (since one of the characters, Jenks, is obsessed with the 21st century and especially online culture), and an awful lot of hip-hop music. Music is always a big deal for me, one of the pivotal scenes in the book was written because of piece called “Exosuit” by Epic North and a climatic Games scene came to me one morning driving to work when Daughtry’s song “Undefeated” came on the playlist.

ASM.: Music certainly unlocks the creativity for me as well! Did you have to do a lot of research into any particular aspect of the plot?

KBW: I didn’t have to do a whole lot, though I did end up delving into space radiation and the various issues living beings have with it when I was researching how to make the LifeEx serum realistic. I also did quite a bit of reading up on climate change for the world building and some of the projected flooding areas since the landscape on Earth is decidedly different in the 25th century due to the events of the Collapse.

ASM.: Which was the most difficult character to write and why? Did any of the characters surprise you while you were writing the book? Or were there plot twists even you the author didn’t see coming?

KBW: Jenks flat out leapt off the page. *laughs* Which is a surprise to no one who’s read the book. Max was a little more difficult but once she got over her initial reticence it was smooth sailing. It was the commander of Zuma’s Ghost, Rosa, who proved to be the most challenging and a lot of her pieces were added in after I’d finished the initial draft because I realized we had some major unbalanced moments on the POVs.

Jenks pretty much continually surprised me, but the best was her friendship with Max and how that blooms. I’d thought the prickly petty officer would be harder to get through to, but that wasn’t the case.

I don’t write from an outline very often and the ones I do use tend to be scene focused, so I get surprised a LOT with plot twists, but oddly enough that didn’t happen in any significant measure with this book. To be honest that was a relief, I’m not sure I’d have been up to major plot twists with my schedule the way it was!

ASM.: What do you think the general appeal of military scifi is to readers?

KBW: I think a lot of the misconception around military scifi is that it’s all very hard science focused, and that doesn’t have to be the case. There are definitely books out there in the genre which will give you specifications on hardware and pages about how warp drives work. But there are plenty which are more character driven and basically trust the reader to understand there is this science and just to roll with it. *winks*

There’s also SUCH a range out there in science fiction and so many good writers like Kameron Hurley, Temi Oh, Charlie Jane Anders who are writing on this amazing spectrum there’s something for everyone.

ASM.: Is there a TV show you’ve recently binge watched?

KBW: Whew. *exhales* I don’t have much time for binge watching lately, but I did make time to watch ‘The Mandalorian’ over the space of a few weeks after it was all out. I’m a Star Wars fan, but this was something else entirely. It combined all the best bits of westerns and space opera and what everyone was calling the “grumpy loner dad” trope. *laughs*

I also have an unrepentant love affair with ‘Jupiter Ascending’. It’s the most glorious train wreck of a film. There was a review once that described it as all the best fanfiction mashed together and I totally agree.

ASM.: What’s next for you? (Will there be more NeoG books?) 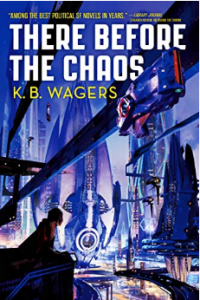 KBW: Yes, more NeoG! I’m currently wrapping up the rough draft of the next NeoG novel. These are all stand alone books to be read independently. Hold Fast Through the Fire will have a lot of familiar faces though as we figured folks might fall in love and want to see more of Zuma’s Ghost.

I’m also about to start edits on the last book in my Farian War trilogy, Out Past The Stars which is published by Orbit. If folks are fans of space operas they’ll want to dive into the first trilogy and meet Hail Bristol, runaway princess turned gunrunner who’s dragged back home to save an empire she could really care less about.

After that, I’m taking some time off to recharge, tackle my massive backlog of reading, and write some proposals for new projects!

KBW: Oh so much. *winces* I did inventory at the end of 2019 and had over 100 books. It’s grown by a few since the start of the year but I’m especially looking forward to reading War Girls by Tochi Onyebuchi, The Poppy War by R.F. Kuang, and Who Fears Death by Nnedi Okorafor. (Don’t judge I’m so far behind! *laughs*) Along with many many others.

For more about K. B. Wagers and their books visit http://www.kbwagers.com/

A profile of the Finnish author Hannu Raijaniemi by our Spanish editor.