In C.S. Lewis’s The Great Divorce, the protagonist’s spiritual journey is also a crash course in human psychology.

It’s the 10th again. Previously in Amazing Stories, two of my first three posts concerned the application of modern social science to classic science fiction. (Multiple intelligences and game theory respectively.) By looking beyond the traditional mold of physics-and-engineering-based SF, the reader can see not only how SF can predict technological advances, but also how SF can predict the study of human behavior. This is somewhat like what I do in my Book of the Month on my blog, in which I take books from all genres in pretty much any direction.

Today, though, SF gets spiritual.

In C.S. Lewis’s The Great Divorce, the protagonist’s spiritual journey is also a crash course in human psychology. 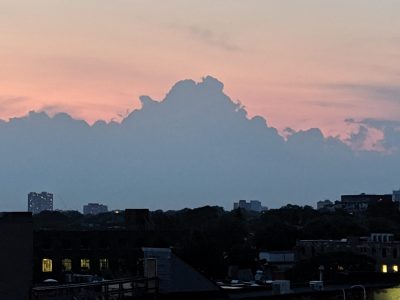 Picture (c) Matthew Gordon. If you squint hard enough, the sunset in the clouds looks sort of like a mountain up to Heaven.

As someone who grew up on Narnia and then read The Screwtape Letters as an adult, The Great Divorce was an obvious choice for me. The story is a modern (by the standards of its day) take on medieval morality tales, which immediately removes it from easy genre categorization.

The main plot point is our characters taking a bus from Hell to Heaven, with absolutely no explanation of how this bus manages to ascend such steep slopes or navigate the crevices of purgatory. Many of the characters either seem destined to return to Hell, or else are simply too lazy to make the journey to Heaven. Lewis underscores the work ethic and sacrifice required to make the leap by having a couple abandon the bus at the very beginning of the trip; they don’t care, so they gain nothing.

Along the way, characters fall victim to various biases, heuristics, and other psychological pitfalls that exclude them from Heaven or else make the journey more difficult. Some notable examples are:

When the White Spirit rejects moral relativism in favour of one absolute Christian truth, he discusses how peoples’ sincerely expressed opinions lead them to Hell. In doing so, he explains bounded rationality – the tendency for people to believe they are arriving at logical conclusion more than they actually are.

Key Quotation: “”I’m far from denying that young men may make mistakes. They may well be influenced by current fashions of thought. But it’s not a question of how the opinions are formed. The point is that they were my honest opinions, sincerely expressed.” “Of course. Having allowed oneself to drift, unresisting, unpraying, accepting every half-conscious solicitation from our desires, we reached a point where we no longer believed the Faith. Just in the same way, a jealous man, drifting and unresisting, reaches a point at which he believes lies about his best friend: a drunkard reaches a point at which (for the moment) he actually believes that another glass will do him no harm. The beliefs are sincere in the sense that they do occur as psychological events in the man’s mind. If that’s what you mean by sincerity they are sincere, and so were ours. But errors which are sincere in that sense are not innocent.”” (Chapter 5)

When a ghost is embarrassed by not being well-dressed enough for the journey to Heaven, the Solid One, a spirit (angel), mocks him. The ghost’s sacrifice, of appearing in public poorly dressed, is so minor the Solid One points out how fleeting it will be, and how non-existent it will be within the scope of the journey. The ghost only cares about his appearance because it is his appearance right now, demonstrating an extreme example of the recency effect – the tendency to remember recent experiences most vividly.

Key Quotation: “An hour hence and you will not care. A day hence and you will laugh at it. Don’t you remember on earth-there were things too hot to touch with your finger but you could drink them all right? Shame is like that. If you will accept it-if you will drink the cup to the bottom-you will find it very nourishing: but try to do anything else with it and it scalds.” (Chapter 8)

Departing from the traditional notion of undead spirits as objects of terror, the Teacher expresses pity for the lost souls who are doomed to Hell. The protagonist only sees ghosts as scary, Halloween-type beings until the Teacher frames them as outcasts from salvation.

Key Quotation: “I had had no idea that this desire was possible. But my Teacher reminded me that the pleasure of frightening is by no means unknown on earth, and also of Tacitus’ saying: “They terrify lest they should fear.” When the debris of a decayed human soul finds itself crumbled into ghosthood and realises “I myself am now that which all humanity has feared, I am just that cold churchyard shadow, that horrible thing which cannot be, yet somehow is,” then to terrify others appears to it an escape from the doom of being a Ghost yet still fearing Ghosts-fearing even the Ghost it is. For to be afraid of oneself is the last horror.” (Chapter 9)

Our protagonist learns his moral errors during a series of encounters with spirits (angels) and ghosts. Eventually, he becomes so accustomed to angels telling him that he is wrong, that when an angel tells him to let go of the past, he makes a correct guess that the angel will always think he is wrong.

Key Quotation: “Oh, of course. I’m wrong. Everything I say or do is wrong, according to you.”

“But of course!” said the Spirit, shining with love and mirth so that my eyes were dazzled.” (Chapter 11)

The protagonist finally lays eyes upon Heaven. He has listened to spirits (angels) and ghosts, who have taught him the importance of embracing God and rejecting sin. So he thinks. Upon learning of his predestined journey, he feels a massive amount of cognitive dissonance – dueling thoughts he cannot reconcile. People attempt to reconcile their thoughts in order to maintain a consistent, competent, morally good vision of themselves, traits that are highly desirable during a journey to Heaven, but our protagonist can’t quite manage it.

Key Quotation: “Then vertigo and terror seized me and, clutching at my Teacher, I said, “Is that the truth? Then is all that I have been seeing in this country false? These conversations between the Spirits and the Ghosts were they only the mimicry of choices that had really been made long ago?”” (Chapter 14)

Quantum messaging: It’s like getting letters from Schroedinger’s Cat

This week Steve brings back—in honour of Shark Week—a column from six years ago about the SYFY movie Sharknado. Does it hold up? Maybe we’ll all have to watch it to find out!

Save the Cheerleader, Save the World!