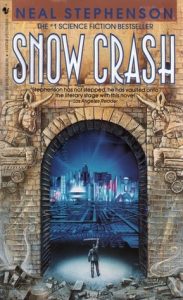 It might seem odd to ring in the New Year by doing a retro review, but science fiction can predict the future and 2017 is a good time to review Snow Crash by Neal Stephenson.

Snow Crash hero’s is literally named “Hiro Protagonist”, which means even dense book reviewers (like myself) know he is the main character. He lives in the 21st century and works as a pizza delivery boy for a mob-owned pizza franchise and due to his abysmal wages has to share a room at a converted public storage site with an immigrant grunge rocker roomate. Of course, that is just Hiro’s real life. In the Metaverse, the virtual reality successor to the Internet, he is a renowned hacker and the world’s greatest sword fighter. In fact, you get the sense he is responsible for creating this digital world, but instead of fame and riches, his lack of ambition has doomed him to a life as a 2-bit hacker who scrapes together what little cash he has by sending gossip to the Central Intelligence Corporation (the future successor to the CIA).

This all changes when his ex-girlfriend, Juanita Marquez, tells him about “Snow Crash”: a new drug/computer virus that is sweeping both the real and virtual world. It can crash minds and cause people to speak in tongues, and does just that to Hiro’s friend Da5id. Thanks to a data file Juanita gives Hiro, he begins to see a connection between the Snow Crash virus, ancient Sumeria and the Tower of Babel legend. Hiro will attempt to track down the man behind the drug with the help of Y.T., a skateboard riding courier who does freelance work for the Mafia, while fighting Raven, a bad ass Aleutian with a grudge against the United States. If Hiro fails, the entire world could kiss free will goodbye.

Snow Crash is an exceedingly well-written and entertaining cyberpunk novel that deserves its spot on all the best of lists I’ve found it on. I personally found the world-building to be exquisite and, if it existed, I would buy a leather-bound fake history book of all the events that led up to its present. The 21st century of Snow Crash is set in a future where the United States government no longer effectively governs the country. Instead most of the duties that were once handled by the government are now controlled by mega-corporations, autonomous gated communities (called “burbclaves”) and mercenary armies. Without anyone enforcing the laws, America is a completely laissez-faire society where the line between legit business and criminal enterprise no longer exists, making “Mafia” just another brand name.

Libertarians should beware, however, because this is largely a dystopia. Hyperinflation has destroyed much of the global economy, refugees are so numerous that there is an entire fleet of them lashed onto the USS Enterprise and racism isn’t something contained just to social media. This brings us to my earlier comparisons to 2017, especially with the current migrant crisis, a new president who seems to think the private sector can do a better job than the federal government and an incredibly interconnected population that has become susceptible to lies and propaganda.

To be fair, there are some details about the future that Stephenson got wrong. There is a lot of early 90s slang laced throughout the book that seriously dates the writing. Also characters bemoan how bad wireless connections to the Metaverse is and devices like tablets don’t appear to exist. Even the recent virtual reality craze doesn’t prevent how the Metaverse is portrayed from coming off as overly-ambitious. Nevertheless, not being able to keep up with the pace of technology is a common problem for many older cyberpunk works and I don’t judge Snow Crash too harshly because of it.

Why? There are a lot books out there that people are telling you to read to better understand our present that it has almost become cliche to recommend a book for that reason. That said, I can’t help but suggest a reading of Snow Crash if you feel any unease about the near future. At times it does eerily appear to lay out the road we are embarking on…and perhaps shows how there is still hope even if we make all the wrong decisions. Hiro and his friends aren’t politicians or celebrities, they are regular people doing what they think is right. They aren’t perfect people and, depending on your moral code, you may not like all of the choices they make, but you have to respect the fact that they took action besides sharing a meme when confronting a would-be tyrant.

So if you want to read a classic SF novel that is even more relevant now, check out Neal Stephenson’s Snow Crash.