Women’s Weird: Strange Stories by Women, 1890-1940, edited by Melissa Edmundson is yet another fine example of publications bringing back important, influential work.

The turn of the century, cloaking the end of the Victorian era, was an ominous period of literary weirdness. Society was still trying to sort itself out as the industrial revolution brought about life changing technologies and gender roles became more contested. Long overdue, fresh voices arose in weird fiction, opening readers to tales befitting an age of fear and the unknown. 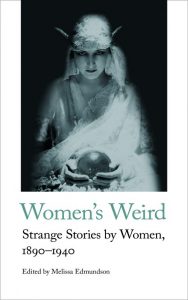 Another brilliant publication from Handheld Press, Editor Melissa Edmundson has compiled a fitting collection of weird tales by a powerful class of women authors in the anthology Women’s Weird: Strange Stories by Women, 1890-1940. For those expecting typical ghost stories filled with mysterious supernatural elements familiar to the era, you’re about to be pleasantly surprised. Often filled with a social commentary that only women of the period can covey with such fluidity, the definition of “weird” becomes blurred and readers will find themselves pausing – a lot.

Though the settings are understandably dated, and the dialog can twist your tongue and times, the true essence of these tales create an environment of not knowing what to expect, what to believe, or what to accept. Even the most haunting tale can have an element of truth, and there lies the crux of this collection. Just as the characters might apprehensively turn a corner for fear of what lay ahead, readers will feel the same anxiety as they turn the next page.

More of a literary guide than a history lesson, young writers would do well to learn from these examples of how it is done. Included in the collection, you will find:

The Weird of the Walfords by Louisa Baldwin first appeared in Longman’s Magazine in November 1889.

The Shadow by Edith Nesbit was published in Black and White under the The Portant of the Shadow in December 1905.

Kerfol by Edith Wharton first appeared in her collection Xingu and Other Stories in 1916.

Hodge by Elinor Mordaunt was first published in the April 1921 edition of Metropolitan Magazine.

Where Their Fire is Not Quenched by May Sinclair was first published in the October 1922 copy of English Review.

The Haunted Saucepan by Margery Lawrence was first published in The Tatler in December 1922.

The Twelve Apostles by Eleanor Scott first appeared in the authors 1929 collection Randalls Round.

The Book by Margeret Irwin first appeared in the September 1930 publication of The London Mercury.

Couching at the Door by D. K. Broster was first published in The Cornhill Magazine in December 1933.

With and Without Buttons by Mary Butts appeared posthumously in Brendin Publishing’s 1938 Last Stories.

Amazing Stories reviewed other inspiring works from Handheld Press in the Summer 209 print edition, Volume 76, Issue 4, including What Not: A prophetic Comedy by Rose Macaulay and What Might Have Been: The Story of a Social War by Ernest Bramah. Women’s Weird: Strange Stories by Women, 1890-1940, edited by Melissa Edmundson is yet another fine example of publications bringing back important, influential works that need to be preserved, and handed down to the fandom who follow.